Ripped from the Headlines, The Gringo Aims to Be a Musical for Our Time

Choreographer Christopher Page-Sanders just wants all the dancers in the room to be chill.

"With your arms you can do whatever you want, but it has to be really chill. Chill and relaxed. Chill and relaxed. Yes? Clear? Has anybody ever been to Miami?" he asks the group of auditionees lining the basement dance studio in University City's Center of Creative Arts, or COCA. One says no. "There's a certain atmosphere in Miami that we are looking for," Page-Sanders continues. "Chill, relaxed, cool, clean."

It's not Miami; it's St. Louis in February, and it's dark outside, and freezing cold. Inside, under the fluorescent lights, everyone is wearing shorts, sweatpants or leggings along with their dance shoes. But when Page-Sanders turns the music on, from the rhythm pulsing through the room, you'd think you were at a party in Little Havana.

The concentration is fierce as Page-Sanders shouts counts over the music. The dancers move across the wood floor, working to match the hip-hop-influenced choreography to the beats. You can tell it's not what they are used to performing at a typical musical-theater audition.

And it's not supposed to be. These local performers aren't auditioning for a traditional, Golden Age Broadway musical like you've seen at the Muny or the Fabulous Fox. They're instead trying out for the new musical serving as the local headliner for St. Lou Fringe this month. The festival, which takes place in Grand Center each summer, doesn't produce your grandma's idea of the arts: We're talking new work, uncensored, unjuried performance and exposure for semi-professional performers.

That makes St. Lou Fringe a perfect fit for this particular musical, simply titled The Gringo, which is set to premiere at .ZACK August 16 to 19. Written, directed and music-directed by 28-year-old St. Louisan Colin Healy, The Gringo takes place between two graffiti-covered Miami neighborhoods — Overtown, which is historic but rundown, and Wynwood, which Healy describes as "graffiti and gentrification central."

The script follows a young street artist named Ishmael who arrives in town shortly after a beloved local street artist known as El Fantasma is shot to death by police. The story follows Ishmael as he confronts his white privilege in unfamiliar territory and reveals the stories of others he meets along the way, leading to the musical's ultimate question: If your home is hell and you have the privilege to leave, do you? Or do you stay and fight for it?

If any of this storyline seems familiar, well, it should. While The Gringo takes place in Miami, it deals with themes that would be recognizable anywhere in 2018, such as internet fame, hook-up culture and police brutality — and offers particularly uncomfortable parallels for St. Louis. But from the look of the audition turnout, St. Louis is here for it. And if this production team's hopes come true, this year's St. Lou Fringe festival won't be the last stop for The Gringo: It will instead be the one that helps launch it. 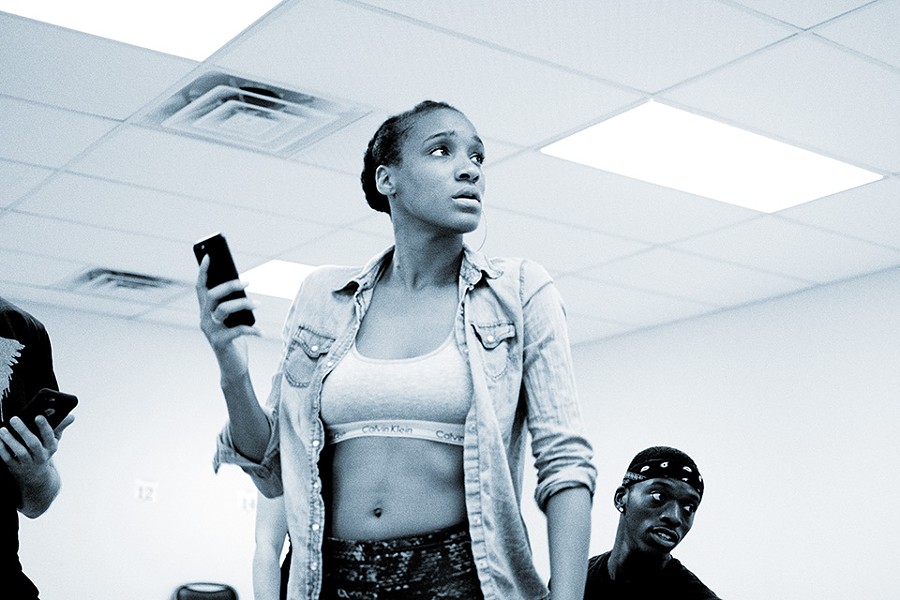 To trace the beginnings of The Gringo, you have to back up to 2013, a time when tragedy struck in Miami — a trauma not so different from the shooting of Michael Brown, which galvanized St. Louis the following year.

Six months later, the medical examiner would call Hernandez-Llach's passing a "sudden cardiac death" and declare the incident an accident, according to the Miami Herald. Hernandez-Llach's death led to his parents filing a lawsuit against the city of Miami Beach and its police department for using excessive force. It also cued protests against the police and debate about the use of Tasers.

At the time, Healy was studying theater education and acting at Florida International University in Miami. Having grown up in the suburbs of Miami, he found that Hernandez-Llach's death struck close to home — literally.

As night fell a day or two after the teen's death, Healy wrote down two little words that served as the title for a story idea: "The Gringo." As he sat in his 350-square-foot West Miami apartment, Healy began exploring the characters that now make up the story. It wasn't long after that he realized that Hernandez-Llach, who was only a few years younger, had gone to his high school.

"I thought to myself, 'Wow, that could've been me,'" Healy remembers.

But that mindset wouldn't last.

"Once I started digging into the story a little more, I'm like, 'No, it was never going to be me,'" Healy says. "It really started this whole journey of privilege awakening in a way for me, like realizing despite anything — despite anything that's not whiteness and straightness and maleness, it doesn't matter. I still have that privilege, regardless if I'm financially and socially equal to someone else ... I didn't ever see that growing up, and it was this event that was the turning point for me."

Often sporting a baseball cap with his beard and glasses, Healy today has a demeanor that's more low-key composer than Broadway diva. But while he'd likely blend in with the twentysomethings at your favorite Cherokee Street bar, there's a big difference: Few people his age have had a project like The Gringo consuming their thoughts for five-plus years — or put the same kind of passion and drive into bringing it to fruition.

It was after his wakeup call while researching Hernandez-Llach's story, Healy says, that he truly dove into writing the show. Thinking back on it now, he thinks he might have been aware of his privilege at a much younger age had he grown up in St. Louis and not Miami. South Florida's melting-pot makeup can be deceptive.

But time passed. Healy went on tour with the Republik, the band he was a part of at the time, and The Gringo fell to the wayside. That is, until a year later, when Michael Brown was shot.