The Final Year Shows What We Lost When Trump Won

COURTESY OF MAGNOLIA PICTURES Ben Rhodes, Samantha Power, John Kerry and Barack Obama used competence and diplomacy to forge a better world -- what happened next will shock you.

The Final Year should have been the sort of documentary that practically creates itself, a brisk look at key players in the Obama administration as they complete their last year in the service of the president. Filmmaker Greg Barker seems to have been given almost total access to the inner circles of the White House as he filmed three of its major figures — Secretary of State John Kerry, UN Ambassador Samantha Power and Deputy National Security Adviser Ben Rhodes — at their homes, in their offices and on diplomatic business around the world (with occasional cameos by Obama himself). Although the film works its way through a few important international events, it's also light and personal; you don't feel like you'll need to memorize a year's worth of U.S. News & World Report to keep up.

The trio makes an interesting team. That Kerry, the war hero turned anti-war organizer turned politician, simply exudes experience, should surprise no one. The lesser-known Rhodes is a smooth political player (we see him easily deflect a minor public relations crisis when a newspaper quotes him belittling the intelligence of the White House press), while Power seems calmer, more inclined toward empathy with the people she meets. Finally, casting a shadow over them even when he's off-screen is the president himself, an analytical, inquisitive figure still engaged with the duties of his job after seven years. 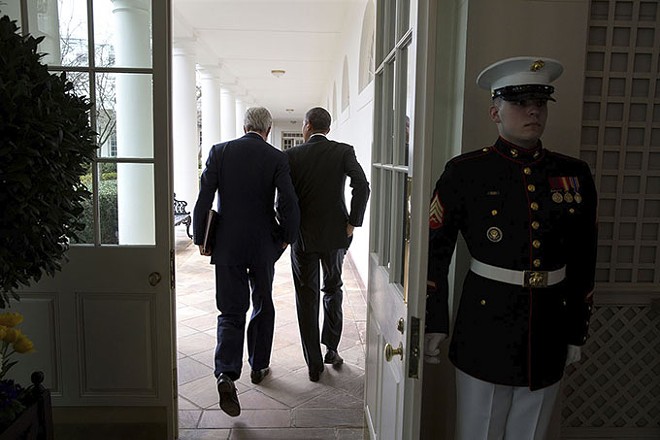 I suspect that Barker intended the film to be a kind of victory lap for the Obama administration, an intimate look at the personalities behind our foreign policy and a behind-the-scenes glimpse of international deal-making in action. Kerry, Power and Rhodes are on top of their games and making progress on several key issues: opening diplomatic relations with Cuba, limiting nuclear development in Iran and getting the rest of the world to take part in an agreement on climate change. On one level, The Final Year is a movie about taking action in difficult situations; it's a pleasure to watch competent, compassionate people applying their skills to real-world problems. In that respect, this is a film about people actually getting things done, a rare subject in the real world.

If only that were the whole story.

The Final Year moves steadily through various foreign issues and encounters, but then suddenly something happens that throws both the figures in the film and the filmmaker for a loop. The 2016 election gives the film a shock, an unexpected ending.

They continue to travel and practice diplomacy, but the rest of the world is suddenly getting nervous about the U.S. election and the unstable figure threatening to take center stage. Who is this newcomer on the rise and why are his Twitter ramblings getting more attention than the real accomplishments of Obama's diplomatic staff? Rhodes, Power and Kerry are shaken, but so is the rest of the world.

It's a strange thing to watch The Final Year in the same week as reading Fire and Fury, Michael Wolff's inside account of the first year (more or less) of the turbulent administration currently in power. One can't help but contrast the chaos, infighting and general ineptitude the author describes with the casual skill and simple competence of the film's subjects. One also can't help but notice that nearly all of the issues where they made progress have been reversed or threatened with reversal by their successors for no reason other than spite or resentment of Obama's legacy.

Recent headlines make the accomplishments shown in The Final Year bittersweet, like a lost cause or a contest where the rules keep changing and the finish line is moved. We can't help but see the film from two perspectives: as a story of achievement and as a story of lost opportunities. It's a strange question to ask, but we live in strange times: Can you be nostalgic for a world that we lived in only fifteen months ago?