The Exhausting Prosecution of the Rev. Darryl Gray

The case against the Rev. Darryl Gray is a curious tale in the often hard-to-comprehend system of criminal justice in St. Louis.

In the past three years, city attorneys have devoted untold hours to the prosecution of the 66-year-old pastor for allegedly interfering with police duties during a protest in 2017 — a charge they have sought to minimize, arguing in court papers that it falls somewhere below a misdemeanor and shouldn't result in jail time even if it didn't. If they prevail against Gray, the payoff for their hard work and the expenditure of city resources would be a fine of maybe a couple hundred dollars.

"This is not benefiting the taxpayers, because this is costing more money," Gray's attorney Javad Khazaeli says. "They're not taking dangerous people off the streets."

But the city continues to pursue Gray, nonetheless. It won a conviction last year in municipal court against Gray and another conviction in January against 37-year-old protester Calvin "Cap" Kennedy, who was arrested during the same incident. Attorneys from the city counselor's office are now battling appeals from Gray and Kennedy in state court, arguing in filings that they don't have the right to a jury trial.

In a brief statement, the city pointed out that both Gray and Kennedy were convicted and that it is they who have "chosen to spend more time [in the circuit court] seeking an appeal."

Adding to the curiously dogged pursuit of Gray and Kennedy is the way the city has handled hundreds of other arrests made during weeks of protests in the fall of 2017 after white ex-St. Louis cop Jason Stockley was acquitted of murder in the killing of a 24-year-old Black man named Anthony Lamar Smith. Police had responded to demonstrations with force, fogging whole blocks with tear gas, firing pepper balls from military-style armored vehicles and rounding up protesters by the dozens during mass arrests. But if the police department's response was aggressive — a federal judge criticized their uses of pepper spray as retaliatory and ordered them to change their tactics — that of the counselor's office during the following months was less so. Hundreds of protesters were informed their initial court dates were being pushed off and then heard nothing else as the one-year deadline for filing charges came and went.

Now, as the clashes of 2017 fade into a jam-packed history of St. Louis protests, others have moved on, but Gray is still grappling with a violent confrontation and a battle that never ends.

"There's been no vindication on this," he says. "I've been living with this for three years. I don't want to be angry, but there are moments I think about this, I get angry."

On September 29, 2017, protesters pulled off a high-profile caper on St. Louis' biggest stage.

It was two weeks after the Stockley verdict, and so far, demonstrations had consisted largely of marches and moves to occupy city roads and highways. This was different. Gray was among a small number of activists who bought tickets to that night's Cardinals-Brewers game at Busch Stadium and took seats in the stands. During the second inning, they stood and whipped out a large "Stop Killing Us" banner and hung it from the upper deck.

Police ushered them out, where they joined a larger band of jubilant protesters for a march around downtown.

The scene was streamed live on Facebook, and it made national headlines. As a bonus, no one was hurt or arrested.

With the main action of the night completed, the march proceeded with little drama. The role of Gray and several other pastors during the march was to trail along at the back, acting as a buffer between police and protesters. It was a strategy they had routinely deployed to reduce violence, but there seemed to be little risk as they strolled easily through downtown.

Police trailed the group, blocking traffic at intersections for them, but otherwise hung back.

"Everything was totally calm and, to be honest, this was actually one of the times that, up until this moment, that police were actually reacting more rationally," Khazaeli of Khazaeli Wyrsch, LLC, says.

Shortly before 10 p.m., the marchers looped back toward the stadium, where they planned to wrap up the night's action. Gray and other witnesses say the easy-going mood of police changed as the protesters crossed Walnut Street at the northeast corner of Ballpark Village.

"It felt like us coming back was more than they had stomach for," the Rev. David Gerth says. 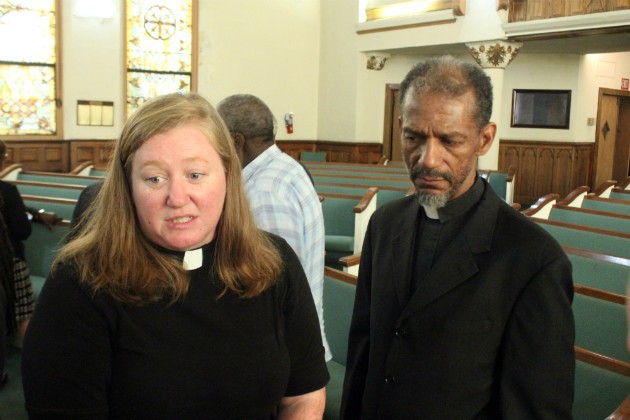 The Rev. Erin Counihan later told reporters that police suddenly released traffic on Walnut, cutting off part of the group, and when she complained, she was grabbed and shoved by officers. Gray was a few steps ahead but hustled back across the street.

But the interaction did turn physical almost immediately. Gray and Counihan say that when Gray questioned cops, an officer, later identified as Detective Ronald Vaughan, shoved him and pepper sprayed him in the face from inches away. A second officer bear-hugged Gray from behind, yanked him off his feet and slammed him to the street.

Gray's glasses and hat bounced into the roadway. Two or three more cops pounced, mashing him down with their knees and hands, pulling his arms behind him for handcuffs. Gray says he looked up from the pavement to see an officer step on his glasses, busting them under his boot.

"I'm clergy. I got my collar on," Gray says, still incredulous today as he recounts the incident. "You know that I'm clergy. So why? Why get violent with me?"

Within seconds of Gray hitting the ground, Calvin Kennedy rushed forward, banging into Vaughan before he seemed to realize his mistake and turned to sprint away. Officers chased him down, pepper sprayed him and shot him with a Taser, sinking the barbed metal dart into his upper left arm.

By the time most protesters realized what was happening, Gray and Kennedy were in cuffs. Video of the scene shows officers dragging Gray across the sidewalk until he can finally get his feet underneath him. A small cluster of demonstrators angrily demanded to know what was going on and were treated to a long stream of pepper spray. Even people at the edges of the crowd were sprayed.

Cardinals fans, having just watched the home team's late-game rally fall short, filed out of the stadium to find lines of cops, people shouting and protesters and journalists trying desperately to clear pepper spray from their eyes.

"It was surreal," Gerth says. "It was really surreal."

Gray and Kennedy spent the night in the city jail. Kennedy still had the Taser's barb in his arm when he emerged the next morning. Gray wore the paper bracelet from booking on his wrist for days as a reminder.