The Disaster Artist Hilariously Explores the Life of Tommy Wiseau

JUSTINA MINTZ, COURTESY OF A24 Tommy Wiseau (James Franco, center) and his strange film come to life in The Disaster Artist.

Illusion and artistic creation are central to James Franco's The Disaster Artist, an energetically silly film made stranger by its relation to real-life events. It's a Hollywood fantasy, a story about success and failure as seen through the eyes of someone who can't tell the difference. This look at the making of the 2003 cult film The Room is held together by Franco's gifted and uninhibited performance/imitation of its subject, the elusive Tommy Wiseau. It's not necessary to have seen The Room; the film and its maker are so inseparable that Franco's film plays more like an alternate version, a fan remix of the 2003 original.

The Room has emerged in the last decade as an almost perfect example of a film maudit. Everything about it is so wrong, so misguided and yet so obviously deliberate that you can only stare in wonder at its very existence. Plot elements aren't just left unresolved, they're replaced by completely unrelated new ones. It's a dozen teary Lifetime dramas edited in a Mixmaster and carried solely on the shoulders of the lumbering Wiseau, its writer, director, star and distributor, whose own elusive history neatly mirrors the film's incoherency.

Refusing to discuss any details of his past (he lies about his age and explains his heavy Eastern European accent by insisting that he's from New Orleans), Wiseau produced The Room with a seemingly bottomless source of funds. He bought the cameras and equipment rather than rent them, insisted on illogical production decisions such as using blue-screen photography for perfectly ordinary locations, and once the film was completed, spent $250,000 advertising it on a Los Angeles billboard. After being celebrated for more than a decade as a masterpiece of unintentional comedy, the movie he created remains as mysterious as ever, a cinematic found object of outsider art. 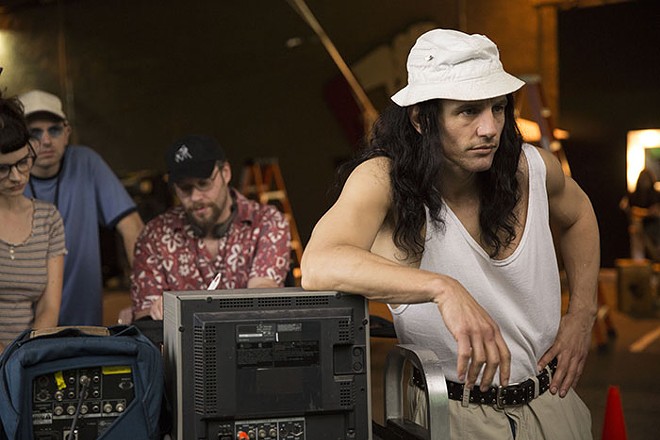 The Disaster Artist is based on actor Greg Sestero's account of the making of The Room and his friendship with Wiseau. It's the most useful account of the film so far, but in Franco's hands, it turns into something else, a comic extension of Wiseau's film as a commentary on acting, the film industry and the pursuit of fame. The Disaster Artist allows Wiseau's tormented, unpredictable on-screen personality ("You're tearing me apart, Lisa!") to run loose in slightly larger territory, showing an illogical creature forced to deal with the mundane details of making a film and maintaining a friendship. Much of the humor comes from simply recreating the scenes of The Room, with its non-sequiturs and oddly unmotivated dramatic scenes, but there are also some pointed jabs at the nature of fame and ambition.

Franco's film inevitably recalls Tim Burton's Ed Wood, another portrait of a legendarily incompetent filmmaker. The Disaster Artist even reaches the same conclusion, ultimately finding something perversely admirable in the image of an artist overwhelmed by his own dizzy vision (and also nearly overwhelming the people around him in the process). And that, more than the opportunity for audiences to make wisecracks and throw spoons at the screen, is what makes The Room so continually fascinating. It's raw and overwrought and, yes, even comically inept, but it's clearly a work of passion, no matter how misguided or poorly executed. You can't help but puzzle over the mind of its creator. The Disaster Artist gets us closer to that mind, even as it lets us continue to enjoy the puzzle's missing pieces.