In 1991, few bands could rival Guns N' Roses in either record sales or in reputation for mayhem. The LA band's 1987 debut record, Appetite for Destruction, sold more than 30 million copies worldwide, and in the summer of 1991, GNR was touring the world in advance of its most ambitious project, the double album Use Your Illusion I & II, set to be released that September.

The North American leg got off to a rocky start as the band was two hours late to the stage at the kick-off show in East Troy, Wisconsin. But the negative press that trailed GNR — delayed start times, frontman Axl Rose's combative on-stage rants, scuffles with fans and security — only burnished its reputation as legitimate rock & roll bad boys.

The St. Louis date of the Use Your Illusion tour would be only the third event at the brand-new Riverport Amphitheater (now Hollywood Casino Amphitheatre). Local concert promotion heavyweights Contemporary Productions were 50 percent owners of the Maryland Heights venue and had sole rights to its booking, which filled a longstanding need for presenting concerts too big for spaces like the Fox Theatre beyond the cavernous (now demolished) Checkerdome.

For the band's July 2 Riverport date, 17,000 tickets were sold, nearing capacity for the 20,000-seat venue. After an opening set by Skid Row, Guns N' Roses took the stage to the strains of Leonard Cohen's "Everybody Knows." The band played for nearly 90 minutes before chaos broke out.

Rose, reportedly agitated by the contraband camera snuck in by hard-rock fan and Saddle Tramps motorcycle club member Bill "Stump" Stephenson," leapt angrily into the crowd. After a few moments, Rose returned to the stage, blamed the "lame-ass" security, threw his mic down and left. His bandmates, seemingly confused by the melee, followed suit.

What happened after has long since passed into St. Louis concert lore and become a defining moment in GNR's legend. The "Riverport Riot" left more than 60 people injured, caused hundreds of thousands of dollars of damage to the brand-new venue and saddled Rose with arrest warrants, lawsuits and hefty settlements.

On the 25th anniversary of the aborted concert and its aftermath — and as a reconstituted Guns N' Roses tours the United States — the Riverfront Times presents an oral history of the Riverport Riot from those who saw it firsthand: the promoters, security guards, radio DJs, music critics and teenage fans who were there when the house lights went up and the shit went down.

On June 14, 1991, Riverport Amphitheater hosted its first concert. Built on a flood plain in a then-undeveloped part of west St. Louis county, the venue is the jewel in the crown of Steve Schankman and Irv Zuckerman's Contemporary Productions. The company has been booking concerts since 1969.

Steve Schankman, co-founder of Contemporary Productions: We opened Riverport in June, and the first show was Steve Winwood and Robert Cray. I think that went off without a hitch. When Mannheim Steamroller played, we got an incredible amount of wind; it was The Wizard of Oz visiting St. Louis. And we weren't set to have that kind of weather, so all the stuff on top of the pavilion was starting to blow over. I mean, they left roofing up there and metal stuff. They hadn't gotten it cleaned up yet. The foundation was settling, trees were just planted, so everything was a lot more vulnerable that early on. 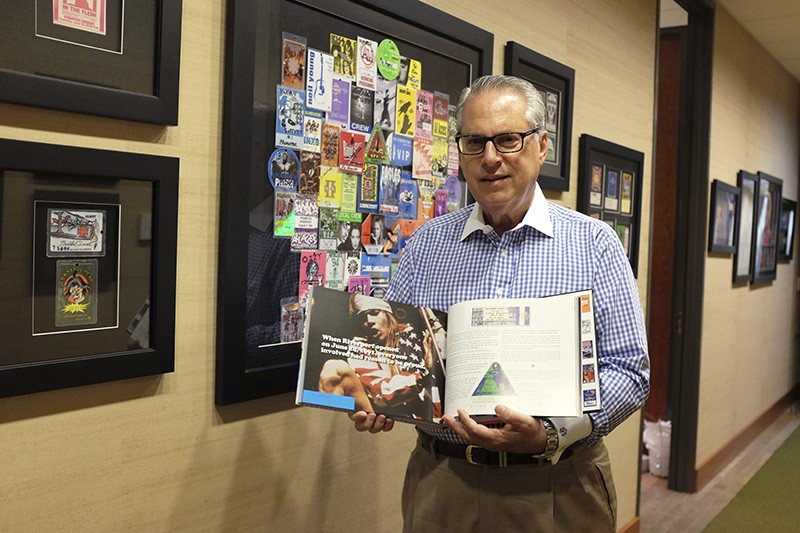 The Guns and Roses show would be only the third concert at Riverport — and everyone was geared up for something big.

Walter Wright, B & D Security: I was running security for the barricades. Everybody had known the hype of GNR — they were the biggest thing out there. You had heard of him starting late, being temperamental. There was a lot of hype, but it was no different than Metallica or AC/DC.

Schankman: When it was booked, it was in January, so we weren't seeing the problems he was having in other venues, coming on stage late. So I asked the manager who was there, I said, "What is it gonna be like tonight?" He said, "He's calming down but don't plan on him being onstage on time. You think you're gonna see him at 9 o'clock but he's not gonna be there at 9 o'clock."

"This is something that a lot of you may already fucking own since it sold three to five million bootlegs. Impatient motherfuckers!"

Anticipation was high for the show, which found Guns N' Roses at both its creative peak and on the precipice of forces — drug addiction, combative personalities, unprofessional behavior — that would eventually scuttle the band's interpersonal dynamics. None of that mattered to its many fans.

Jon Feraro, fan: I remember how good of an album Appetite for Destruction was. It blew the doors off everything else. It was incredible. All the bands you saw on MTV were wearing makeup and super poppy — bands like Poison. GNR came along and just killed the glam show. Their rock was so powerful and dirty and good.

Thomas Crone, then-staff writer, Riverfront Times: They were the biggest band in the world.

Guy "Favazz" Favazza, KSHE DJ: I had officially started at KSHE two weeks before. I had been an intern for 6 months. I had bought tickets with my high school friends, and we were dying to see 'em.

Schankman: It was just another show — there was a list of shows for the summer printed out, and here was GNR. I didn't know what GNR was — I thought it was a record company. I mean, Irv Zuckerman, who was my partner for 30 years, he did all the booking. That was his department. I ran all the operations.

Feraro: We were stoked and stoned and super ready.

Scott Bahan, fan: I was sixteen in 1991. It was my first official concert I went to on my own. I was starstruck by the whole thing. I thought Axl Rose and Slash and those guys were larger than life, and they looked that way with these two huge screens that they had on each side of the stage. We were out in the grass. I was taken back by the spectacle of the whole thing.

Crone: It was a very dude-heavy crowd too, as might be assumed. It was just dude after dude, shirtless and hanging out and sort of loud. It was a loud crowd; people were ready to rock.

Favazza: It was an awesome show. I was a big Slash fan. I was sitting on his side. I can't say I really had an inkling what was going on.

Axl Rose, for the most part, seemed like himself — or as much himself as Axl Rose can ever be. According to the professionally shot video of the show, widely accessible online, Rose makes no overt complaints to the crowd about cameras or security issues.

Schankman: He looked a little agitated to me, but I'd never met the guy.

Dan Durchholz, then-Riverfront Times music writer: Most of the concert went off fine without incident. It was almost over when it all went down.

Favazza: He was kind of a jerk on stage, I thought. He told a story about being molested in St. Louis. I remember that part and have seen that online. He was just setting the stage.

Rose told the crowd, "St. Louis! I'll tell you a little something about this city. I was seventeen, and I left Indiana because I had a disagreement with one of the juvenile detectives. I had about 35 bucks and I took a bus to St. Louis. That was cool. I had about a half a joint and I went down by the Arch and smoked half a joint. And then I went out by whatever freeway I was closest to and I hitched a ride with some air conditioning repair man in a van. It all seemed pleasant and safe enough and nothing really much happened. I was, like, exhausted and beat and never been out of my fucking town on my own in my life. And we went to some fucking hotel and I crashed out and this guy crashed out, and I woke up and this guy was trying to fuck me. I don't care — you can be male, female, you can be a fucking dog — I don't care what you are, man, that shit ain't right. It took everything I had not to slash his jugular vein."

Schankman: Show goes on, and I'm walking the audience, and during "Live and Let Die" everything was fine. I walked all the way up to his protruding stage. He brought his own thrust that went into the fifth or sixth row. The audience was tame as could be. We were extra-precautionary and brought in more security than usual, only because it was a hard rock show. We'd do the same for Metallica. Do the same for Lollapalooza.

Wright: It didn't seem uncontrollable at all. Most of the evictions were alcohol-related. Back then, the '80s/early '90s, a lot of times you did let the crowd release a little bit. We weren't having a particularly hard time keeping the crowd out of the aisles.

Bill "Stump" Stephenson, a longtime rock & roll concert-goer with a penchant for shooting shows without permission, had worked his way to the front of the stage.

Bill "Stump" Stephenson, concert-goer and contraband photographer: I handed him a card saying "Welcome to St. Louis," with my motorcycle emblem, which I had done in the past, and they always gave me a thumb's up. He just kind of read it and threw it to the side.

In the middle of "Rocket Queen," Rose stopped singing to point out Stephenson and his camera. He then jumped into the crowd. The entire exchange, from Rose's exhortations to his diving into the crowd, took nine seconds.