The Fight to Remember the Pandemic's Dead Before They're Forgotten

STEVEN DUONG Angela Kender, holding a portrait of her mother, documents the toll COVID-19 has taken. 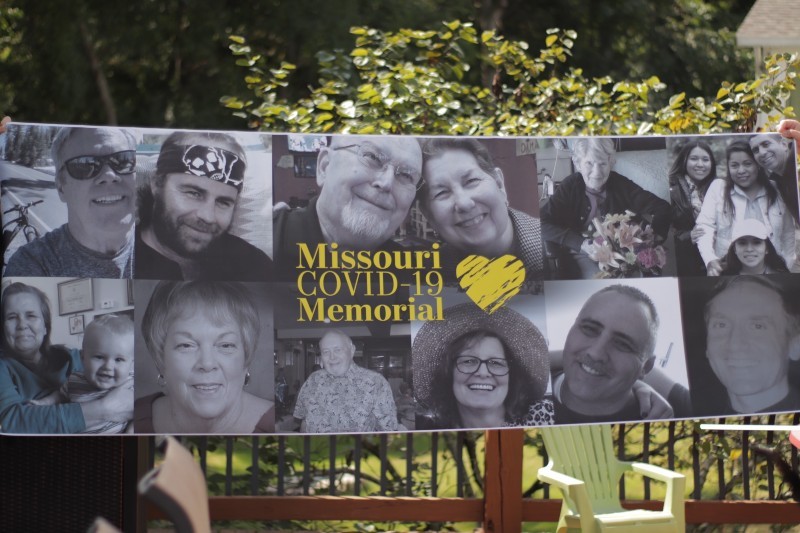 Kender's efforts to memorialize her mother and other COVID-19 victims are part of a fast-growing movement nationwide to preserve memories of those lost, as well as tell the story of what life was like for everyone else during the worst American health crisis in more than a century — a human catastrophe that has upended every facet of life.

Most of these efforts flow from inspired amateurs like Kender, who want to preserve the legacies of the people who left life too soon.

But there is also a political motive. The people pushing this campaign want to remind the public and politicians of a crucial fact: Those lost to COVID-19 were real people who loved and were loved, who mattered, who left behind devastated friends and family.

And in their honor, they are demanding that politicians pull together and demand that everyone wear face masks — the surest way to prevent COVID-19's spread and save lives until an effective vaccine arrives.

Kristin Urquiza, of San Francisco, founded the national group Marked By COVID on July 8 — the day she buried her 65-year-old father Mark Urquiza, a Mexican American aerospace worker who had caught the virus a few weeks before at a Phoenix karaoke bar.

The elder Urquiza, a lifelong Republican, made the mistake of believing Arizona Gov. Doug Ducey and President Trump, both of whom proclaimed it was safe to return to normal activities at a time when COVID-19 cases were spiking in Arizona, according to Urquiza.

"I launched it because I wanted to personify the loss of life that we're seeing," says Urquiza, who told her story to the nation during the Democratic National Convention in late August.

She caught the attention of the DNC after the searing obituary she wrote in honor of her father was published in a Phoenix newspaper and went viral.

Urquiza blamed her father's death on "the carelessness of politicians who continue to jeopardize the health of brown bodies through a clear lack of leadership, refusal to acknowledge the severity of this crisis, and inability and unwillingness to give clear and decisive direction on how to minimize risk."

Urquiza started an ofrenda, an altar with photos of those lost to the pandemic, outside the Arizona State Capitol. The public was invited to bring their own pictures of those suffering from the coronavirus' effects or who had died from it.

One goal of Marked By COVID — a play on her father's first name — is to bring greater honesty to obituaries written to honor those who've died from COVID-19.

Marked By COVID is raising money "to sponsor the obituaries of folks who want to tell the truth about how their loved one died," Urquiza wrote in a recent essay for the Huffington Post. "It's important to me that we find ways to uplift the stories of people like my dad: everyday people whose lives were cut short because our leaders refused to lead or put politics above human life."

The efforts of Kender and Urquiza to remember those lost to the pandemic and to call leaders to account flow into a swelling torrent of collective memorialization.

It seeks to document and explain this seismic moment in American history — a volatile inflection point in the national narrative that encompasses a monumental loss of life; political chaos and attacks on democracy; lockdowns and quarantines; Zoom for school, work, weddings and funerals; economic collapse and mass joblessness; and a far-reaching reckoning on racial justice and police accountability that has resulted in violence in America's major cities.

An era of cheap and super-abundant social media and high-speed internet coincides with a time when almost every cellphone has a camera. It all adds up to a list of resources to document life and national history that is many magnitudes greater than was ever available before.

The comparison to the storytelling tools available during what's been termed the Spanish flu pandemic of 1918 — when almost all news traveled by telegraph, newspaper and handwritten letters, and when women were forbidden to vote — could hardly be more stark, according to Kender.

"My ultimate view is that we are much better documenting things in a variety of ways," Kender says. "Women now have a voice. We didn't have a voice back then. We have more people from different heritages. And more of us will be able to do something to keep this remembered and visible. And hopefully in the next 100 years when something like this happens, we'll have a better response."

Angie Dietz, the director of digital initiatives for the Missouri Historical Society, began five months ago to collect first-person accounts and photos to document how the pandemic is affecting people in the St. Louis area.

As part of her research for this project, Dietz says she's been reading diary entries of people who lived through the flu epidemic of more than a century ago.

"There is some resonance there," Dietz says. "I think when we go through these kind of moments when we try to figure out our place in this moment of history, how to deal with it as a family, as a community, as a society, we just need to be able to tell stories about it."

Stories are important, Dietz adds, because "I think it's a way to try and make sense of a moment. It helps to understand that you're not the only one going through that. That there are other people who have similar stories."

The vast outpouring of materials about the pandemic being collected and displayed is thanks to the super-proliferation of online resources such as emails as well as social media platforms including Twitter and Facebook.

But it's also an effort to avoid the memory hole that came to surround the 1918 pandemic, which killed nearly 700,000 Americans within a few years, and as many as 100 million people worldwide.

Part of the reason there is so much collective amnesia about the 1918 pandemic stemmed from the fact that the U.S., early after the first cases were reported, kept this information secret out of fear of giving an advantage to military opponents during World War I, according to Dietz.

Another reason for the collective amnesia was the federal government and the news media's relentless focus on the war, said Katie Foss, a professor of media studies at Middle Tennessee State University.

Foss is the author of the newly published book Constructing the Outbreak: Epidemics in Media and Collective Memory, which focuses on how American society is affected by pandemics and recalls them.

"Why we didn't see more in the moment is just because it was overshadowed by war discourse," Foss says. "There was so much emphasis on World War I at the time, that to do even a little bit of coverage on the pandemic, it was perceived as taking away from it."

Case in point: President Woodrow Wilson never once mentioned the Spanish flu — even though it was killing on average about 7,000 Americans per week — in any of his public utterances, according to the Washington Post. Wilson caught the flu himself during the pandemic and nearly died in 1919 while negotiating the Treaty of Versailles.

Another case in point: As part of the research for her book, Foss says she bought a 1919 University of Kansas yearbook. The only mention of the 1918 Spanish flu in the yearbook was confined to one page, "as to explain why the football season was delayed," she says. "There was nothing else in there, even though a number of students and faculty died from influenza and a number were quarantined on campus. They didn't mention it at all."

When the Spanish flu peaked in late 1918, the public's focus was on celebrating "the end of the war, rather than to dwell on the tragedy of the pandemic," Foss says. "Even during its worst months the focus was on the war."

As they collect materials for future exhibitions and to help the public make sense of this era, the professional preservationists are careful to keep politics out of the mix.

"At this point what we're really trying to do is capture as much as we can," says Chris Gordon, the historical society's director of library and collections.

When it comes to the reasons politics played such a big role in America's response to the COVID-19 crisis, "Historians will make those judgments. They're going to assess and interpret this down the road," Gordon says. "But it is our duty as historians now, as archivists, as preservationists, to really grab as much of this material as we can to give as clear a picture of what's going on now for future historians, whether it's five years down the road or ten years. We really have to be as unbiased as we can in pulling all this stuff together."

No one could blame preservationists like Gordon for trying to go about their task in a neutral way that averts controversy. That's just the nature of their work.

Still, it's tempting to consider how future historians will look at this moment we are living through and try to make sense of it.

What, for instance, will the historians, social scientists and journalists of a future age say about a president who, obsessed with his reelection, continually lied to the nation, promoted quack cures, drew thousands of maskless supporters to campaign rallies and caused the needless deaths of tens of thousands of the very people he had sworn an oath to protect?

How will they remember a president who absurdly downplayed the crisis, and then relentlessly hawked crackpot cures like the drug hydroxychloroquine, even suggesting that bleach injected into the bloodstream could be a possible cure?

The historical record will surely reveal more bombshells of the kind that surfaced in journalist Bob Woodward's book Rage — a recorded conversation of the president admitting that he knew COVID-19 was far more infectious and deadly than he was telling the public.

And of course there will be the role of social media to dissect, especially giants like Facebook and Twitter, whose business models prioritize rage, fear, hate speech and unmoored paranoia. All of which has provided a gold mine, both literal and figurative, to an army of scam artists, kooks, trolls, Russian intelligence agents and bonkers conspiracy theorists.

On that subject, how will the future researchers explain the right-wing, pro-Trump conspiracy cult QAnon, which claims, absurdly, that Trump is the leader of a secret campaign against enemies in the "deep state" and a child sex-trafficking ring run by satanic pedophiles and cannibals?

An artifact that future historians will surely pick over and analyze to make sense of how far America went off the rails is the viral documentary Plandemic, released in May of this year.

It's a steaming crockpot of lies and claptrap featuring a discredited medical researcher named Judy Mikovits. The film makes a number of absurd claims, including such false assertions as vaccines and face masks make people more susceptible to COVID-19, and that hydroxychloroquine is an effective way to prevent the virus. Plandemic has been yanked many times from Facebook, Twitter, YouTube and other mainstream platforms.

Will any of this look less depraved with the passage of time?

Will any of it somehow make sense to future generations?

Or will it look even crazier and more out of control than it seems to our numbed-out and over-stressed brains?