The Fight to Remember the Pandemic's Dead Before They're Forgotten

STEVEN DUONG Angela Kender, holding a portrait of her mother, documents the toll COVID-19 has taken.

The scene: the intensive care unit at Barnes-Jewish Hospital.

Gaye Griffin-Snyder lay in an ICU bed as the rays of a late-afternoon June sun gave way to dusk.

Two days had passed since Griffin-Snyder had been admitted to the ICU with symptoms of COVID-19: rapid heart rate, shortness of breath, fever.

Griffin-Snyder, a retired psychologist, stared upward, her eyes focused on a large monitor bolted to the wall. A woman's voice emanated from the speakers; Griffin-Snyder listened intently.

She was having her last real conversation, a video chat with her daughter and only child, Angela Kender, of Oakville.

The video chat neared its end.

The next day she tried to video chat with her mother once more.

"And it was like a 180 [degree change]," Kender says, "a totally different situation. She was no longer putting sentences together. I could no longer understand what she was trying to say to me. It was the lack of oxygen. She was so low on oxygen for so long. She couldn't think straight."

Gaye Griffin-Snyder grew up in Springfield, Missouri, a devout Christian and a proud liberal in one of the reddest slices of the American pie.

She raised her daughter as a single parent, and she spent her career counseling people with addiction problems. In her final years she lived in a Glen Carbon, Illinois, nursing home while she battled multiple sclerosis.

A few days after those video chats with her daughter in June, Griffin-Snyder passed away. She was 71.

In the months since her mother's death, Kender has tried to make sense of this sudden, profound loss.

To honor her late mother, she has started a campaign to convince Missouri's Republican governor, Mike Parson, to issue a statewide mask mandate.

Kender so far has not succeeded in making contact with Parson or his staff. During the General Assembly's special session in early August, she held press conferences and handed out fliers pushing for a mandate, but so far Parson and his fellow Republicans, who control both of the state's legislative chambers, have shown zero interest.

"It is just basic human decency to try to take care of each other," she says. "Let's say it helps protect only 20 percent of the people you come into contact with. I think that's still worth it. Especially for people who claim to be such good, socially responsible people, right?"

Parson, who is running for his first full gubernatorial term after being appointed to the job in 2018 following Eric Greitens' resignation, has been accused by Democratic challenger Nicole Galloway, the state auditor, of doing "so little" to fight the lethal pandemic in Missouri. As of late September, Missouri was ranked fifth nationwide in COVID-19 case rates, with the addition of 179 new cases for every 100,000 residents, according to the White House Coronavirus Task Force.

A recent TV spot for Parson's campaign, which is airing only in St. Louis, shows the 65-year-old governor touring a hospital while in a face mask. The ad touts his handling of the pandemic with a "balanced" approach.

Nonetheless, Parson has been widely lambasted for refusing to impose a statewide mask mandate, as well as leaving it up to local officials to decide on measures such as requiring masks in public spaces and the closure of bars and restaurants.

Kelli Jones, Parson's spokeswoman, wrote in an email to the RFT that "Governor Parson is sorry to learn of Ms. Kender's loss. He sends his condolences to her and to all families and friends who have lost loved ones."

Jones added, "Governor Parson reminds and encourages Missourians, almost daily, that they need to social distance, wear a mask, and wash their hands. He has always supported wearing a mask."

Parson has made no secret of his devotion to and support for President Donald Trump.

The governor's choice of a role model matters greatly for Missourians, since Trump — obsessed with reopening an economy that he sees as key to his reelection in November — has used his global pulpit to lie about and downplay the dangers of COVID-19. As recently as September 21, the president told an arena full of tightly packed fans at an Ohio campaign rally that the coronavirus "affects virtually nobody," even as the number of Americans dead from COVID-19 closed in on 200,000.

Trump has bragged about slowing down coronavirus testing efforts, installed officials at the Centers for Disease Control and Prevention to censor COVID-19 reports and mocked reporters and elected leaders for wearing face coverings. Trump himself has resisted wearing face masks, donning them in public only rarely.

In addition, Trump has continued to hold mass campaign rallies during which thousands of true-believer fans are crammed together with few bothering to wear face coverings — occasions that some public health experts label as "super-spreader events."

Trump himself is a super-spreader of misinformation about the pandemic, according to a new Cornell University study.

The study's authors found that out of 38 million news articles about the pandemic in English-language media around the world, mentions of Trump made up 38 percent of the overall "misinformation conversation," making Trump the single largest source of falsehoods about the epidemic, according to the New York Times.

This past Friday morning, most of America woke up to the stunning news that Trump and his wife Melania had tested positive for COVID-19, followed shortly after by an announcement that the president was being airlifted to Walter Reed National Medical Military Center. Trump and his team of advisers have spent the days since in a jumbled attempt to project an image of strength, even as it was revealed Trump had been treated with experimental drugs, typically reserved for those who are severely ill.

U.S. senators, advisors and journalists who were with the president, have now tested positive as well, adding new angles to the story.

By the time Trump was transferred back to the White House on Monday evening, the 74-year-old was battling not only COVID-19, but perceptions that he was far sicker than he was willing to admit.

That howling sound you're hearing off in the distance?

The gods of karma laughing in sheer, unbridled glee. 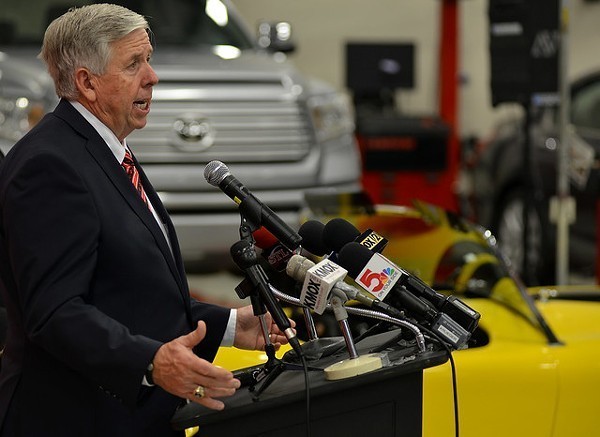 Kender is once again trying to get the attention of the governor. On Sunday, she began what she is calling a Week of Mourning, recognizing the victims of COVID-19 at the state capitol in Jefferson City.

To help with her lobbying efforts, Kender has printed out dozens of fliers with photos of some of the Missourians who have died of COVID-19.

She also helped make a short documentary, Sunsets and Me, about her mother's life and Kender's subsequent fight to pass a statewide mask mandate.

The documentary closes with Kender looking fatigued and exasperated. The scene is filmed at the end of a long day of fruitlessly trying to meet with Parson and other GOP lawmakers during the August special session.

Kender stares into the camera wearily, her face a mask of frustration and disbelief.

"It's really shocking to me how many people at the capitol don't care and aren't taking it seriously," she says.

"Treat people with the same decency you want them to treat you with," she says. "Actually, I am infuriated I have to say these things. That it's even necessary to go and do this is insanity to me."

Kender sometimes wonders why so many people — intelligent, educated, decent people — choose not to wear face masks, a decision that puts themselves and loved ones at such an easily avoidable risk.

There are many reasons for the refusal to wear face masks, including politics, even though the masks have been conclusively proven to be the single most effective way of deterring the virus' spread and keeping people safe. But the bottom line is that many people have come to believe they can't control the virus, along with other things in their lives, she says.

"So you just choose to believe, 'Oh, well, it's not that big a deal,'" Kender says. "Because it's a more comfortable way to live. Instead of living in fear, people want to live comfortably, I guess."

One image sticks with Kender after her frustrating day of lobbying at the state capitol. She was eating lunch in the building's cafeteria. A short distance away sat a group of Republican lawmakers. None of them practiced social distancing or wore face masks.

"It is offensive when you lost someone to the virus, and you've seen what it does," Kender says. "And to know you are looking at me from across the room without a mask on, and you know putting a mask on could protect me and you're choosing not to."

Kender pauses, seeming to search for the words to describe how she feels.

"It is a slap in our faces, those of us who lost someone."