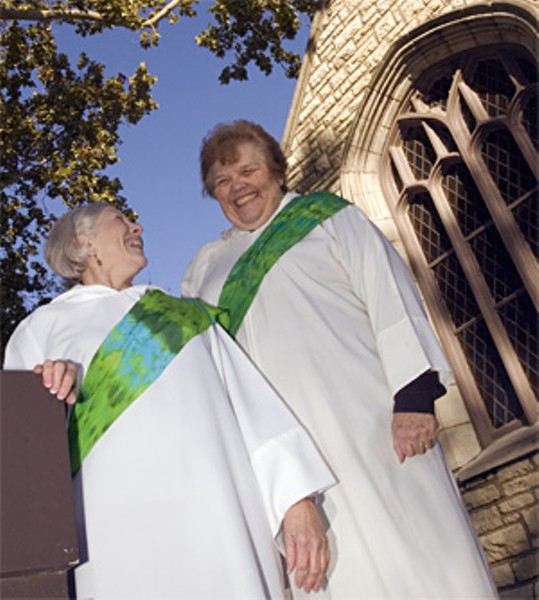 The usual ordination of a Roman Catholic priest takes place in a cathedral and includes a vow of obedience to clerical superiors. It then culminates in the sacred "laying on of hands," when the bishop presses his palms on the candidate's head. Keeping with 2,000 years of tradition, all the participants are male.

But a priesthood ordination that bucks all Catholic custom will take place in St. Louis on Sunday, November 11. There will be no oath of obedience uttered at the ceremony, and no brother clergy at the altar when Bishop Patricia Fresen lays her hands on two women: Rose Marie "Ree" Hudson, of Festus, and Elsie McGrath, of south St. Louis.

Catholic priests in attendance are likely to be few, and those who do turn out will not be "robed up," as one priest, who plans to come dressed in plain clothes, put it. The 3 p.m. Mass is scheduled to take place at the Central Reform Congregation, a St. Louis temple well-known for opening its sacred space to non-Jewish groups. "This is history," observes Ronald Modras, a professor of theology at Saint Louis University, who specializes in contemporary Christianity and Catholic-Jewish relations.

When the ceremony ends, Hudson, 67, and McGrath, 69, will join the ranks of 22 other American women already ordained as part of the so-called Roman Catholic Womenpriests Program. The controversial international movement took root June 29, 2002, when seven women were secretly ordained aboard a pleasure boat on the Danube River in Passau, Germany.

The service was an explicit violation of Canon Law 1024, which states: "Only a baptized male validly receives sacred ordination." It also ran afoul of the 1994 apostolic letter by Pope John Paul II, which declared that the "Church has no authority whatsoever to confer priestly ordination on women..." Now known as the "Danube Seven," the women were excommunicated by the Vatican.

Hudson and McGrath, though, are completely indifferent and unafraid that they, too, risk a similar fate. It is time, they say, that the Catholic Church becomes more inclusive. "Change," says McGrath, "is not going to happen unless we do something radical."

The women made certain to alert St. Louis Archbishop Raymond Burke of their plans. In an October 1 letter, they wrote: "We do not expect you to support us or condone our actions, but we pray that you may accept that God is calling us to priesthood and that the Spirit is preparing the way, in justice, for women as well as men to be called to priestly ministry."

The Archbishop did not respond, but did a send a letter to Rabbi Susan Talve, of the Central Reform Congregation, urging her to cancel the ceremony and intimating that it would harm Catholic-Jewish relations. Talve — whose board of directors approved of the Mass — in turn informed the Archbishop that the ordination wold go on. "The First Unitarian Church across the street housed us for sixteen years, so we have a long history of appreciating other people's hospitality," explains Talve. "It would be terribly unfortunate for the Catholic Church to make a decision on their relationship with all the Jewish community based on the actions of one congregation."

The Archdiocese did not return a phone call for comment.

There are some local priests who are supportive of allowing Hudson and McGrath to become women of the cloth. "We constantly have to be trying to figure out what would Jesus want us to do?" says a longtime priest in the Archdiocese, who spoke on the condition of anonymity. "This strikes me as something He would want."

Hudson and McGrath both have long histories of serving the Church and possess extensive religious academic credentials, including master's degrees. (Male candidates for the priesthood typically spend four years at a seminary, after college, though Jesuits and men of other religious orders can spend more than ten postgraduate years preparing.)

Both ex-Protestants, Hudson and McGrath each came to Catholicism through their husbands. McGrath says she felt her calling to the Church about ten years ago when she and her now-deceased husband, Jim, completed four years of deaconate prep classes. Women can take the course but cannot become full-fledged deacons. Leaving Jim at the altar for his ordination while she took a seat in a pew, was "absolutely agonizing," recalls McGrath. "It was like being stabbed in the heart."

Hudson and McGrath met in April 2006 and since then have studied liturgy under Bishop Fresen to finalize their priestly formation. A former South African nun who now resides in Germany, Fresen became a priest in 2003 and a bishop in 2005. She descends from the original "Danube Seven," who were ordained in 2002 by Rómulo Antonio Braschi, an Argentine bishop who had fallen out of favor with the Vatican and then left the Church.

While it may sound radical to many Catholics, the Womenpriest movement actually represents the culmination of more than 30 years of lobbying and activism by the Washington, D.C.-based Women's Ordination Conference (WOC). Many members of the interest group believe not only in women's ordination, but also that total reform of the Church is needed. They advocate for less hierarchy and more democracy, less political posturing and more diversity — and making celibacy for priests optional.

Hudson and McGrath, like some of their Womenpriest predecessors, plan to open a new place of worship — "a faith community," they call it — with those very tenets in mind. The women will go by their first names to parishioners and will begin the "Lord's Prayer" with "Our Mother, Our Father." Masculine imagery such as "Kingdom" and "Master" will not be used and anyone, regardless of sexuality and marital status, is invited.

"My hope for the new priests, Elsie and Ree, is that they'll be a light for people who have not felt welcome, who have felt on the margins of the Roman Catholic Church," says Gerry Rauch, a St. Louis member of the WOC's board of directors. "Those who have divorced and remarried, or those who are gay and lesbian and transgendered."

The first service at Hudson's and McGrath's Thérèse of Divine Peace Inclusive Community will take place at the First Unitarian Church of St. Louis at 4:30 p.m. on December 1, and weekly thereafter.

Jane Via, a Kirkwood native who now lives in San Diego, where she presides over the largest Womanpriest church in the U.S., is keeping Hudson and McGrath in her thoughts. Via is on "interdict" from her local archdiocese, a form of censure that prevents her from taking Communion in a Catholic church, among other things. Her "case" has also been referred to Rome for possible further punishment.

Via's advice to Hudson and McGrath: "Be faithful to the vision of a renewed priestly ministry at all costs, whatever the cost may be."