On a clear afternoon in September, a white Spire gas company truck sped through north St. Louis. A 27-year-old named James Harris was behind the wheel, steering along rough roads and occasionally swerving out of his lane or pausing at odd intervals. Harris was not, in fact, a Spire employee, which helped explain why two television news helicopters had been filming the truck's every move for the past 45 minutes and why police in unmarked cars were trailing behind, out of sight.

Harris had swiped the white pickup, emblazoned with Spire's orange logo, three hours earlier from a company parking lot in the St. Louis suburb of Shrewsbury. He drove east across the Mississippi River and wound through Illinois. His past misadventures had never attracted this much attention, but he was far from a rookie car thief. By his estimation, he had "test driven" more than 100 vehicles during the past decade. It's impossible to say whether that's accurate, given that Harris sometimes gets a little confused and overestimates his feats and abilities.

He was, however, proving difficult to corral. Wearing a red jersey and blackout sunglasses that concealed the wandering pupil of his blind right eye, he evaded a potentially tire-popping spike strip on Interstate 55 in the Metro East, kicking up a cloud of dust as he swerved through the grass and back onto the pavement of an off-ramp. The news choppers had at times clocked him at more than 90 miles per hour. They filmed him rocketing across the majestic Stan Musial Veterans Memorial Bridge and hovered overhead as he zipped past vacant buildings and Barnes-Jewish Hospital. Their cameras zoomed in as he idled in rush-hour traffic near Saint Louis University.

"It would be really interesting, and of course we're going to continue to work to find out, what is the motivation for this?" KMOV reporter Chris Nagus said on air as he and anchor Claire Kellett narrated the action from the station's studio. "What's this person up to today? What's their mindset? Why are they doing this?"

Shortly after 4 p.m., Harris parked behind a long blue dumpster on Locust Street in Grand Center, turned off the engine and slid out of the cab. He gave the pickup a final pat and started walking west. His right arm swung loosely at his side. His left, less so. He limped a little.

"Just casually walking, Claire," said Nagus, the surprise evident in his voice. "I mean, not in a hurry, not running anywhere. Just taking a casual stroll right down the sidewalk."

Harris had started to cross the street when a pair of unmarked police cars zoomed up on either side. Visibly startled, he raised his hands and dropped to his knees as a pair of plainclothes St. Louis police officers ordered him to the ground at gunpoint.

And suddenly it was over. Police loaded Harris into a transport van, and the live news broadcasts adjourned to a commercial break. 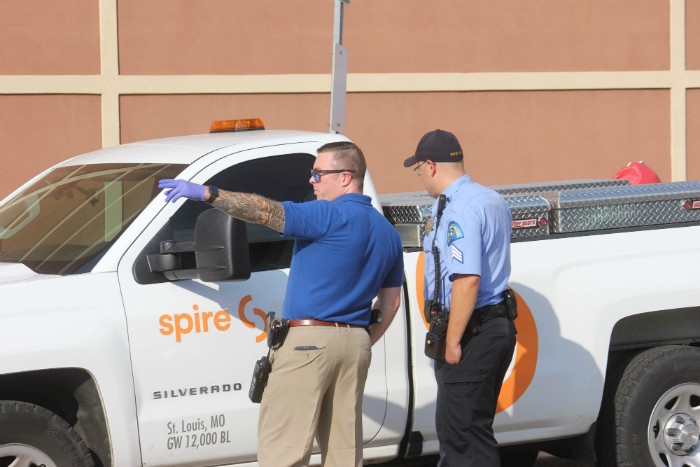 At age sixteen, Harris ran away from a foster home and started living with his seventeen-year-old cousin in an unfinished building in the College Hill neighborhood of north St. Louis.

The utilities had been shut off, but an extension cord into a neighboring building provided electricity. An adjacent restaurant was rumored to be a drug front for an older relative, and strangers drifted in and out. It was a dangerous spot, but a history of family trauma left the teens with limited options. Harris' mom had been a prostitute, and he and his siblings had been taken by the state several years before she died of AIDS when the boy was thirteen. He stayed with his grandfather for a while, but the grandfather was now dead, too.

On the night of September 27, 2008, Harris and his cousin, Stephon "Red" Perry, were asleep when a gunman slipped in and shot them both in the head for reasons that remain a mystery to this day. Perry was killed. Harris survived, but barely.

He had been shot in the face, the bullet entering alongside the bridge of his nose and exiting through the back of his head. He spent more than a week in Barnes-Jewish Hospital before he was transferred to the Rehabilitation Institute of St. Louis. Sheila Lynch, an occupational therapist there, remembers when he arrived.

At first, it was difficult to tell the extent of the damage. Harris could not talk, and Lynch and the other therapists were not sure whether anything they said was getting through. That continued for another week, until the teen started moving one of his hands. Lynch gave him a pen and he wrote down a phone number for a foster home where he had stayed. It was a lightbulb moment she still remembers more than a decade later.

"We knew he was in there," Lynch says. "That was the first time we knew his brain was working in any capacity."

Soon, Harris was writing down words like "Snickers" and "chicken" — all the foods he could not eat, because his meals were still being pureed into a liquid and fed to him through a tube. After several weeks, he began to regain his voice.

"Once he got his voice back and could talk, you couldn't shut him up," Lynch says, laughing.

His injuries were substantial, and some of the damage was permanent. Harris was now blind and deaf on his right side, and the long-term mental effects of a bullet ripping through his skull were murky. But the teen was enthusiastic and hardworking, eager to show off each new ability as his motor skills returned.

"He's got a spirit about him that was pretty amazing," Lynch says.

The rehabilitation center's staff threw Harris a party when he was finally ready to leave them in December 2008. He was days from his seventeenth birthday and had progressed to using a wheelchair. Lynch knew the next steps would be hard. Whoever had shot him was still on the loose, and because police didn't know the gunman's motive, no one knew if the teen was still in danger. So Harris was being sent in protective custody to a youth home in Waynesville two hours away from St. Louis. He would not know anyone there or be allowed to contact any of his scattered friends and family. Lynch was one of the few people who would know where he was.

Once a month, she and Harris' speech therapist would drive down to check in on him.

"I knew he wouldn't have anybody," Lynch says. "At the time, I thought he needed a lifeline."