The Bootlegger Who Took Down the KKK

PHOTO BY SCOTT PHILLIPS Today Benton, Illinois, has a replica of the gallows where Charlie drew his last breath. 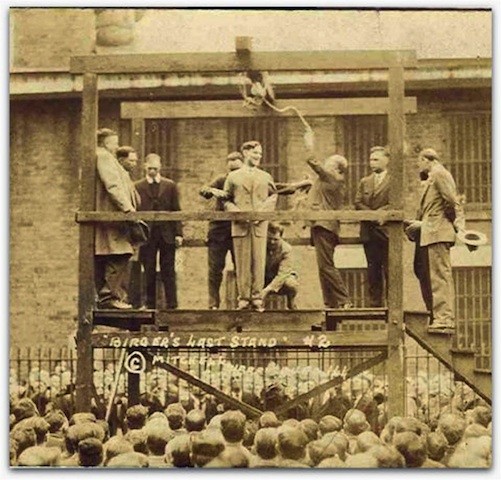 In early childhood, Charlie Birger, along with his parents, had followed an older brother from Russia to St. Louis (where for a time young Charlie was a Post-Dispatch newsboy) and later to southern Illinois. This was coal country, then as now, and as Jews and immigrants, the Birgers represented everything a certain element feared and hated about the changing nature of rural America. Formerly Protestant towns like Herrin, Benton and Marion found themselves home to immigrants from the Appalachians, from southern and eastern Europe as well as Ireland and Wales, all come to work in the coal mines. These new citizens' dietary and religious customs did not always jibe with the local norms. Nor, significantly, did the taste of some of these communities for alcohol.

In the years before 1919, when the Volstead Act banned the production and sale of "intoxicating liquors" across the nation, Charlie was already running a small coal country vice empire. Following stints as a miner, a soldier and a cowboy, he had returned to Illinois, married a woman from East St. Louis (he had three wives in all, and two daughters) and settled down in Harrisburg. There he opened up a saloon called the Near Bar, which also served as a casino and brothel. But it was Prohibition that really made Charlie, turning him from a small-time country operator into a full-fledged gangster.

In the modern imagination Prohibition tends to figure as an urban phenomenon, with rough speakeasies in Chicago and Manhattan sophisticates drinking bathtub gin in suites at the Algonquin. Rural Illinois, though, like most of America, was never going to go without its booze. Charlie and his quickly expanding gang joined forces with the notorious Shelton brothers of neighboring Williamson County to distribute alcohol throughout coal country.

For a few years things went swimmingly for the Birger and Shelton gangs. Charlie was a remarkably charismatic man, good-looking and charming, and he was seen as a hero by many, particularly in Harrisburg, where he made sure the crime rate stayed close to zero. Apart from the vice operation and the occasional shooting, the Birger gang committed the bulk of its crimes elsewhere.

But by late 1925 things had started going south for Charlie, and when they did, the end came at an astonishing rate of speed.

By then, the nativist locals had had it, and membership in the newly reactivated Ku Klux Klan was surging. Klansmen were going door to door to confiscate liquor and arrest — or abduct, since they had no legal standing to do so — anyone caught with it. Officeholders seen as soft on bootleggers were replaced by Klan members.

Law enforcement in Saline County, home to Harrisburg, was no longer as friendly to Charlie as it had been, so he crossed the line into Williamson County to open up a combination speakeasy, barbecue joint, gas station and hideout: the Shady Rest. There was live music, dancing, gambling and, out back, cockfights and dogfights.

Troubles with the Klan worsened and the bootleggers were faced with the prospect of losing large sums of money where it operated. Though Birger's relations with the Sheltons had deteriorated considerably, the two gangs managed to join forces one last time in April 1926 at a township election in Herrin, Illinois, a notorious hotbed of Klan activity.

Rumor on both sides had it that the day would see trouble, and when Catholic voters were turned away from the polls by a prominent local Klansman named John Smith, fistfights broke out. Later in the day Smith was shot at on the street by an unknown assailant and his garage was sprayed with slugs from Tommy guns. The bootleggers had come to defend their customers — and their own economic interests.

Bullets flew from passing cars and hotel windows, and the National Guard was called in. At the Herrin Masonic Lodge, Birger's men pulled up and exited their vehicles, confronting and disarming the Klansman who had replaced Smith as poll watcher. A nearby Klansman shot Charlie's man, another Birger ally shot the Klansman, and all hell broke loose. By day's end three of Birger's men and three prominent Klansmen lay dead.

The body count may have been even, but the dead Klan members were higher-ups, and it had become clear that the Tommy-gun-toting gangsters had the advantage in armaments. Herrin and its surrounding countryside were traumatized, and the KKK's local organization dazed and demoralized. John Smith even left town for good. The consensus was that the gangsters had prevailed.

The Klan's defeat notwithstanding, relations between the Birger and Shelton gangs were worse than ever, and in the following months that tension erupted into all-out war. As the bodies started piling up, Charlie took to wearing a bullet-proof vest (it's in his cell at the museum) and started driving an armored car. The Sheltons had one of their own, and they needed it.

The Shady Rest has the distinction of being the site of the first aerial bombing attack in the United States. The war between gangs had intensified by November 1926, with a bomb thrown at the compound's barbecue stand. Shortly thereafter the home of Joe Adams — Stutz automobile dealer, mayor of West City and staunch ally of the Sheltons — was machine-gunned, though no one was injured.

In retaliation that same day, an airplane flew over the Shady Rest and dropped three packages of dynamite. The historic moment was a bust; only one package detonated, and with no injuries. (Though, according to Gary DeNeal's biography, A Knight of Another Sort: Prohibition Days and Charlie Birger, the explosion killed a bulldog and a bald eagle.)

About a month later Joe Adams answered his door one Sunday afternoon to two men, one of whom handed him a letter, purportedly from the Sheltons. While the mayor read the note, one of the men shot him dead. That murder would become the crux of Charlie's downfall.