STEWART GOLDSTEIN Evann De-Bose as Denitra (left) and Cherita Armstrong as Dr. Long are both marvelous.

Lines in the Dust

Dr. Beverly Long, the school administrator who serves as the protagonist in Lines in the Dust, tried to fool herself into thinking the Newark Public Schools weren't so bad. Attempting to live by her principles, the Ivy League grad enrolled her son there after taking a job as the district's director of curriculum.

Then one morning she observed the students in her boy's class being patted down — spread-eagled up against the wall, unfazed by what was clearly a routine security measure. It's a story she relays with mounting horror, explaining that she yanked her son out of the district and quit her job on the spot. She saw her boy being inexorably primed for the prison complex that awaits so many promising young black men, and she couldn't abide that. She had to do what was best for her child.

Dr. Long's flight from Newark isn't the central conflict in Lines in the Dust, Nikkole Salter's all-too-current public education drama. First performed in New Jersey in 2014, the play had its St. Louis premiere last weekend in a gripping new production at the Black Rep directed by company founder Ron Himes. When we meet Dr. Long, the horrors of Newark are firmly in her rearview mirror. She's landed a job as principal at high-achieving Millburn High School; her son is one of the few black students in the suburban district, but he appears to be thriving.

Then tragedy hits: A student is murdered, and the district ascertains that the victim is a "border jumper," a kid who faked his residence to get out of Newark. A crackdown on other jumpers — many of them African-American students — is inevitable. But does Dr. Long have the stomach to refer for prosecution parents whose only crime is making a choice she understands all too well?

Salter's script casts its clear-eyed gaze on a world where America has recently elected a black president, but still condemns tens of thousands of black kids to a third-rate education. Salter even alludes to the $100 million that Mark Zuckerberg donated to the Newark schools; the problem, she knows, isn't just a lack of funds. It's all of us — we, the well-meaning progressives who throw out our egalitarian ideals the minute we have a child of our own. We, who abandon the city for suburban districts, and then prosecute poor people if they dare to attempt the same flight. 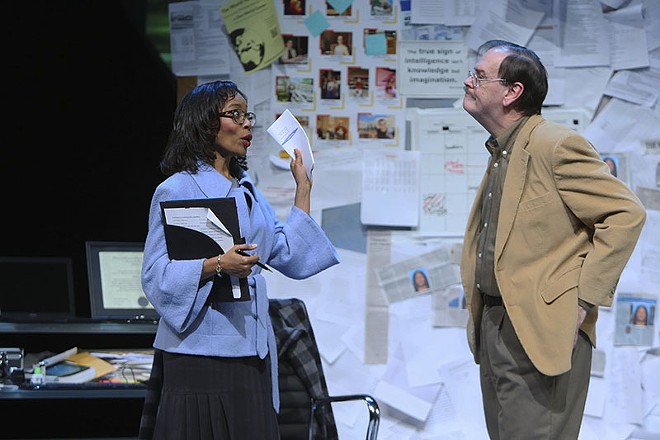 The stage design, by Dunsi Dai, does a great job of rooting the action in several wildly different places with just a few smartly placed props. And all three actors are superb, though the action drags a bit when Dr. Long is on stage with Mike DiMaggio, the detective hired to investigate the border jumpers. That's no fault of the actor — stage veteran John Contini is excellent in the role. But as written by Salter, the detective is immediately revealed as the kind of blowhard who pontificates at city council meetings, an ex-cop who insists "the law is the law" and, later, slurs Dr. Long by suggesting she was on "C.P. time."

We've all known guys like DiMaggio — certain of their righteousness, devoted to the rules rather than any sense of truly fair play. Still, it's hard to take all his bloviating, much less hear the presentation he makes to the school board, twice. Yes, there are some small changes between the two versions, and perhaps Salter meant for these alterations to feel like a sign of progress. But since they do nothing to change the trajectory of the plot, it's hard to applaud DiMaggio's softened rhetoric. A bigot is still a bigot, even if he feels vaguely sorry for the people he's persecuting.

And when he's not around, it leaves Dr. Long to interact with Denitra Morgan, the parent of a gifted student who just may be hiding something. Both Cherita Armstrong as Dr. Long and Evann De-Bose as Denitra are marvelous, and when they're alone on stage together, every complicated truth at the heart of the play seems to crash and collide like balls in a pinball machine gone mad.

There's barely a moment Dr. Long isn't on stage, and yet Armstrong's energy never once flags. She's completely believable in every moment. But Denitra's part is juicier, and De-Bose makes the most of it. Once she gets her big reveal, she's both fiery and funny, and enormously sympathetic. "I wasn't thinking of you," she tells Dr. Long at the moment of truth, the moment when we realize Denitra's selfish actions may cost Dr. Long her job. "I was thinking of her." She's speaking, naturally, of her daughter, and there's not a parent who couldn't identify.