The Best Places to Eat Near St. Louis Attractions

MABEL SUEN Going to the Arch? Stop by Kimchi Guys on the Landing.

If you're hungry after a day spent in Forest Park, you need do little more than close your eyes and point in any direction to land on somewhere great to eat. The Central West End, the Loop, the Grove — even the park's own Boathouse — all offer an embarrassment of culinary riches. Just down Kingshighway, Tower Grove Park, too, is surrounded by such incredible food neighborhoods as Botanical Heights and South Grand that the only hard part about finding somewhere great to eat is deciding between multiple favorites.

St. Louis' other outdoor gems may not appear so lucky on the surface. However, scratch just beneath and you'll find some amazing dining treasures to satisfy both your hunger as well as the thrill of discovery.

The gem of south St. Louis County, Laumeier Sculpture Park is an immersive feast for the eyes, but the restaurants within a short jaunt from its grounds will satisfy the palate. Yolklore (8958 Watson Road, Crestwood; 314-270-8538), a delightful daytime spot just a short drive down Watson, flips the idea of fast-food on its head with outstanding, farm-to-table breakfast and lunch fare served out of a drive-thru. Twisted Tree (10701 Watson Road, Crestwood; 314-394-3366), the reinvention of the old Northeastern Missouri institution the Pear Tree Inn, serves some of the best dry-aged steaks in town, made better with the addition of a deep-fried lobster tail. Of course, the eateries of Kirkwood are also only a short drive away, such as the wonderful the Greek Kitchen (343 South Kirkwood Road, Kirkwood; 314-462-9112) and Nathaniel Reid Bakery (11243 Manchester Road, Kirkwood; 314-858-1019), which is one of the most acclaimed pastry shops in the country. 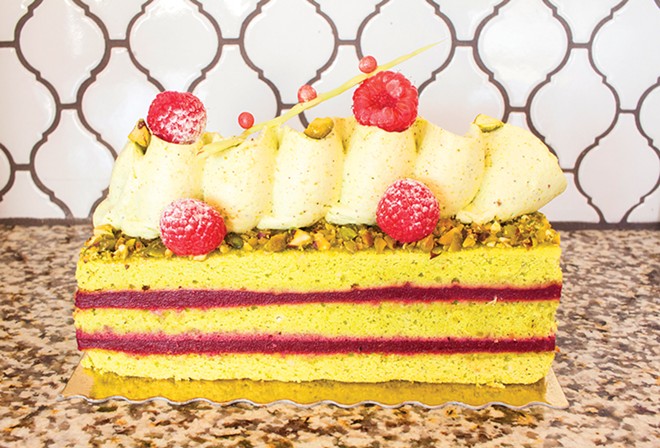 The West County dining scene has many options to help you refuel after a challenging hike up and down Rockwood Reservation's steep grades. Clancy's Irish Pub (40 Old State Road, Ellisville; 636-391-6154), a fifth-generation family-owned establishment that dates back to the 1930s, is worth a visit for the Irish Bites alone. If you're more into Latin American cuisine than corned beer and Swiss-stuffed pretzels, Malinche Mexican Culinary Experience (15939 Manchester Road, Ellisville; 636-220-8514) offers outrageously good food based on old family recipes dating back 150 years. Another longtime family restaurant, Nippon Tei (14025 Manchester Road, Ballwin; 636-386-8999), has become the definitive source for sushi in the entire bi-state area over the last couple of years thanks to the skilled hand of the James Beard-nominated Nick Bognar. For more casual eats, stop by Mideast Market (14345 Manchester Road, Ballwin; 636-230-7018), where you'll find excellent Middle-Eastern and South Asian dishes served from an unassuming lunch counter in the back of the grocery store. The gyro is a must-try.

The World Bird Sanctuary may make you feel like you've gone far off the beaten path, it's only a short hop from the heart of Valley Park and a handful of great dining spots. Dalie's Smokehouse (2951 Dougherty Ferry Road, Valley Park; 636-529-1898) brings the Pappy's barbecue legacy within striking distance of the Sanctuary, offering best-in-class ribs, pulled pork and dry-rubbed wings. Young's Restaurant & Ice Creamery (206 Meramec Station Road, Valley Park; 636-225-6677) has been in business since 1954 as a casual, counter-service eatery that serves both sweet confections and homestyle dishes like chicken, fried fish and burgers. The Malt Shop (1751 Smizer Station Road, Fenton; 636-825-2121) is another of the area's longtime favorites, beloved by Fentonites for its burgers and ice cream treats, and no visit to the area is complete without a stop at the Corner Butchery (2099 Bentley Manor Drive, Fenton; 636-529-8400), whose Gooey Louie sandwich is a shining jewel in the sparkling crown that is its lunch counter menu.

Located on the northern edge of north St. Louis County, Sioux Passage Park is a stunning spot for hiking and taking in views of the Missouri River. While in the area, check out Hendel's (599 Rue St. Denis, Florissant; 314-837-2304), a general store-turned restaurant that's been feeding Florissant residents since the 1800s. Just a few blocks away, Made. By Lia (610 Rue St. Francois, Florissant; 314-551-2383) is a charming pastry shop from Lia Weber, whose prowess with sweets earned her the title of TLC's Next Great Baker, and BJ's Bar & Restaurant (184 W. Washington Street, Florissant; 314-837-7783), whose mozzarella-based take on classic St. Louis style pizza will win over your Provel-averse out-of-town friends. The area also has some excellent international cuisine, like the Middle Eastern gem Kaslick Mediterranean Cuisine (7487 N. Lindbergh Boulevard, Florissant; 314-972-8282) or the outstanding Thai Kitchen (8458 North Lindbergh Boulevard, Florissant; 314-695-5039), whose khao soi stands shoulder-to-shoulder with the city's better-known spots for the dish. 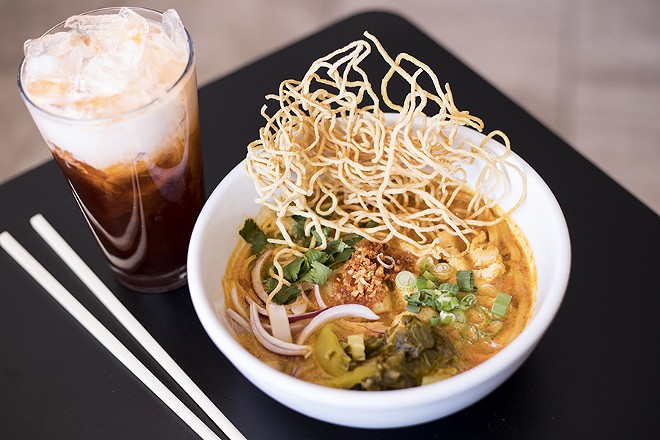 Arguably the area's most significant historical treasure, Cahokia Mounds beckons with the thrill of discovery. For those on the Missouri side of the river, it only makes sense to carry that feeling outside of the park grounds and have dinner in the surrounding areas before making the venture home. Old Herald Brewery & Distillery (115 E. Clay Street, Collinsville, IL; 618-388-8027) pays homage to the former Collinsville Herald newspaper, as well as the city's forgotten brewing and distilling history. Though not even two years-old, Big O's (2001 Hildebrand Street, Madison, IL; 618-593-7629) in Madison has the feeling of a longtime watering hole with surprisingly delicious eats — including breakfast starting at 6 a.m. — served out of its humble digs. Not far away, Tienda El Ranchito (2565 N. 32nd Street, East St. Louis, IL; 618-875-1521), a combination market and food counter, serves some of the best Mexican food on either side of the river. However, you won't want to leave the area without stopping in at longtime eatery Marko's Fish House (820 Madison Avenue, Madison, IL; 618-876-9212) for its famous fried cod, which fans far and wide swear is the best fish sandwich you'll ever eat.

When you think of a trip up the Great River Road to Pere Marquette State Park, your mind rightfully goes to Fast Eddie's Bon Air, the iconic bar and restaurant in Alton that draws people from all over just to experience its cheap eats, cold beer and lively atmosphere. However, the area is also home to other great eateries like the famed Whittmond Hotel (166 East Main Street, Brussels, IL; 618-883-2345), whose family-style dinners will make you feel like you've stumbled back in time to Sunday supper at your great-great grandmother's house. Castelli's Moonlight Restaurant at 255 (3400 Fosterburg Road, Alton, IL; 618-462-4620), another area institution, has been serving its secret family recipe for famous fried chicken since 1937. Another source for fried chicken for those looking for a little something different is CC's Vegan Restaurant (233 East Delmar Avenue, Alton, IL; 618-433-8300), an outstanding source for plant-based cuisine from the skilled hands of Trezel Brown. Her vegan mac and cheese, fried chicken and lasagna flip the narrative on what plant-based food can be.

Though the Gateway Arch stands as the symbol of our fair city, visited by folks from all over the world, the area around its grounds still has an off-the-beaten-path feel. The once thriving Laclede's Landing has seen better days, for sure, but there are a handful of places that are determined to make the area a destination again. Kimchi Guys (612 North 2nd Street, 314-766-4456), the outstanding Korean fried chicken spot from the Landing visionary Munsok So, could make the area a culinary destination on its own. For a more formal experience, longtime steakhouse Al's Restaurant (1200 North 1st Street, 314-421-6399) is an absolute icon of the area, it's steamboat-themed bar a St. Louis landmark in its own right. Just across the highway, the delightful coffeeshop Café de Blaire (442 North 4th Street, 314-737-7701) is in the middle of downtown but has the feel of a warm, neighborhood spot thanks to its wonderful coffee drinks, pastries and ice cream. Of course, if it's ice cream you crave — and enough bacon to take ten years off your life — there's nowhere better than Crown Candy Kitchen (1401 St. Louis Avenue, 314-621-9650), the St. Louis landmark soda fountain and lunch counter that may rival the Arch as the area's biggest icon.