Chris Ward always knew his pizza was good, but it didn't get to next-level good until one night when he was sitting around Party Bear Pizza and Tiny Chef's kitchen with his girlfriend and business partner, Melanie Meyer. The two of them often bounce ideas off one another at their small, counter-service operation inside south-city pinball dive the Silver Ballroom, and on this particular night, Meyer had a revelation.

"Why not spread a layer of garlic purée on the crust before putting on the sauce?" Meyer suggested, prompting Ward to immediately begin experimenting with the idea. Their combined efforts resulted in Party Bear Pizza's signature punch of roasted garlic that infuses every bite with an earthy, pungent flavor. It mingles with the piquant, subtly sweet pizza sauce, transforming this base from regular marinara into a marvelous bomb of the stinking rose — a perfect foundation that made all the difference for Ward's pizza recipes.

Meyer's pizza sauce idea, a stroke of absolute genius, is just one of many ways she and Ward have turned a place that could come off as totally bizarre into something that makes sense. The pair are fully aware that, unlike their garlic purée idea, a restaurant that serves both pizza and Korean street food is an unlikely concept. They also knew that if anyone was capable of pulling it off, it was them. 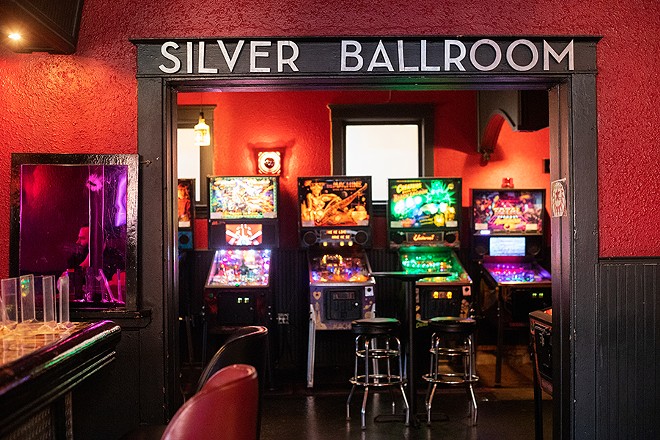 That Party Bear Pizza and Tiny Chef has been so well received has everything to do with Meyer and Ward themselves, two earnestly warm and charming people who are clearly having a great time exploring their own culinary paths while cooking together. For Ward, his journey to the kitchen began when he was an eighth-grader in Rushville, Illinois, and his parents decided to buy a pizzeria. From the get-go, Ward caught the pizza bug and always dreamed of opening a place of his own one day, even though he first pursued a career in journalism.

His break into the pizza business came when a friend sent him an off-handed email with a link to a Craigslist advertisement that stated: "For sale: A party bear." The joke escalated to the point that Ward and his friend found themselves the owners of the human-sized, Hawaiian shirt-clad stuffed bear that became the inspiration for Party Bear Pizza.

Meyer's journey started both earlier and later than Ward's. Born in South Korea, Meyer was adopted as a baby by a family who lived in Missouri. After cooking at several restaurants around town (including Lulu's Local Eatery and the Restaurant at the Cheshire), she felt a calling to explore her Korean roots through food and began teaching herself how to make everything from kimchi to bibimbapto tteokbokki, and hoped she'd be able to open a restaurant of her own one day. 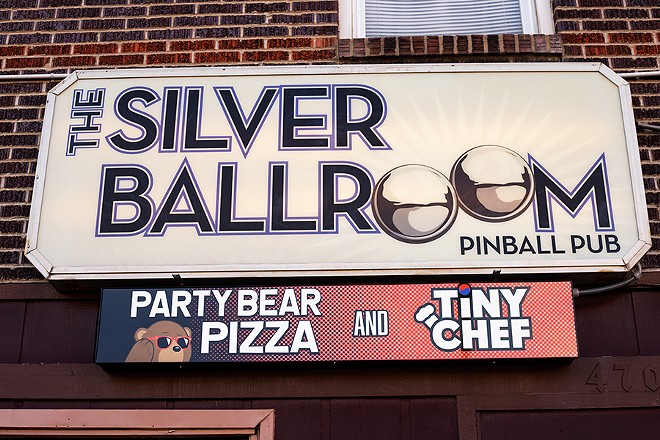 That chance came when she and Ward heard that the Silver Ballroom had an opening for someone to take over its food service, a window-service operation that had previously been home to Devil Dogz. The pair decided that, rather than choosing who would take over the space, they'd go into business together, coining the name Party Bear Pizza and Tiny Chef in the same spirit as all such great duos, like Batman and Robin or Butch Cassidy and the Sundance Kid.

Meyer and Ward can now comfortably add themselves to that list of legendary partnerships. To his credit, Ward's Party Bear Pizza does a great job reinterpreting St. Louis-style pizza for the non-Provel set. His crust is thin, but not cracker thin, and crisps up magnificently so that there is no soggy center as is often the case with St. Louis-style pies. It can handle toppings quite well — a good thing considering the pizzas are slathered with about a quarter-inch thick layer of garlic and sauce and a generous sprinkle of mozzarella cheese. 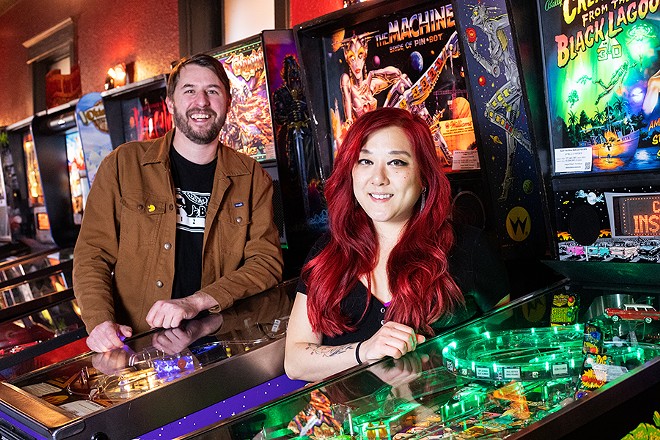 Party Bear's menu is not huge, but what it does, it does well. The Garlic Sticks are pure comfort, a mix of garlic, cheese and dough that is like the pizza version of garlic cheese bread. It's simple, but a showstopper, as is Ward's favorite pizza. Billed as the Hoosier, this fun combination of ham, mushroom and onion somehow evokes the city's famous ham-on-garlic bread Gerber sandwich. It's no wonder Ward speaks so highly of it: It's Party Bear's best offering.

While Party Bear offers the easy comfort you want out of a pizza counter in a bar, Tiny Chef's Korean fare pushes the boundaries of the sort of food you'd expect from such humble digs. Meyer cooks with purpose; this is not simply a parade of excellent dishes but a journey of self-discovery. This passion is evident in her outstanding bibimbap, a bowl of warm, sticky rice covered in a flawlessly-cooked over-easy egg with fragrant pickled carrots and shockingly crunchy kimchi. The dish is served with your choice of protein, but there's no real choice: The char sui pork belly is so delicious she could open a restaurant that serves only it and be a roaring success. Sticky from a soy-based glaze, the meat is scented with flavors of peppercorns, Chinese Five Spice and anise and is so wonderful it will haunt you until your next visit.

Kimchi fried rice is another of Tiny Chef's revelations. More than simple fried rice, Meyer's tastes as if it has been enhanced with the funky spice of gochujang, a fermented Korean chile-soybean paste. The rice has a deep, subtle heat, but it's topped with kimchi, which gives it a jolt of fiery brightness as well as crispy texture.

Meyer shows off her culinary prowess in other dishes as well. Her Korean tacos, topped with succulent soy and garlic-kissed bulgogi beef, are accented with kimchi, jalapeños and the restaurant's signature spicy Dragon sauce or orange-ginger-plum Pixie sauce (I opted for both). The result is a dish that is a perfect balance of sweet, salty and spicy. She's generous with her fillings, too, though this causes the soft flour tortilla wrapper to break up as you bite into it. A double layer of tortillas would help.

Her nachos, made with fried wontons, are positively smothered in Dragon and Pixie sauces, jalapeños, kimchi, cilantro and, on one of my visits, char sui tofu — bar food, but the best bar food you've ever had. Even a hummus special was an unexpected surprise. Here, Meyer infuses a chickpea base with Korean chiles, then tops it with sesame oil and kimchi. In place of plain pita for dipping, the flatbread is accented with gochugaru chile flakes, adding an extra dimension of spice to this magnificent dish.

Although not a fusion restaurant by a long shot, Tiny Chef's hummus, or the garlic spread on Party Bear's pizza, shows the beauty that can come from a simple conversation and a little experimentation with someone you respect. It's clear that Meyer and Ward are having a great time working together at this gem of a place and that their mutual admiration inspires each other to be better at what they do — and thankfully, we all get to reap the results.