MABEL SUEN A collection of dishes from The Bellwether (from left to right and top to bottom): lamb meatballs, short rib ragout, scallop carpaccio, pork steak and chocolate-beet cake.

Two years ago, when Brian Schmitz needed some quiet time away from Polite Society, the popular Lafayette Square restaurant he owns with his business partner Jonathan Frederick, he'd sneak off to Element. It was the perfect escape: close enough so he could get to and from his restaurant in a matter of minutes while seeming worlds away at the same time, a feeling he attributes to the elevator ride up to its third-floor lounge. Element was where he went when he needed to think, and he'd often find himself settled into a barstool with a glass of wine and a notebook, jotting down ideas about menus, service, design and general musings about the restaurant business. When Element closed in October 2018, that respite disappeared — but fortunately not forever.

Today, Schmitz — together with Frederick, bar manager and partner Travis Hebrank and chef Thomas Futrell — finds himself bringing those ideas to life in the very space he drafted them. The Bellwether, which opened five months ago in the former Element digs, is the second restaurant from their Be Polite Hospitality group, which includes Polite Society and the forthcoming City Foundry daytime spot Good Day. 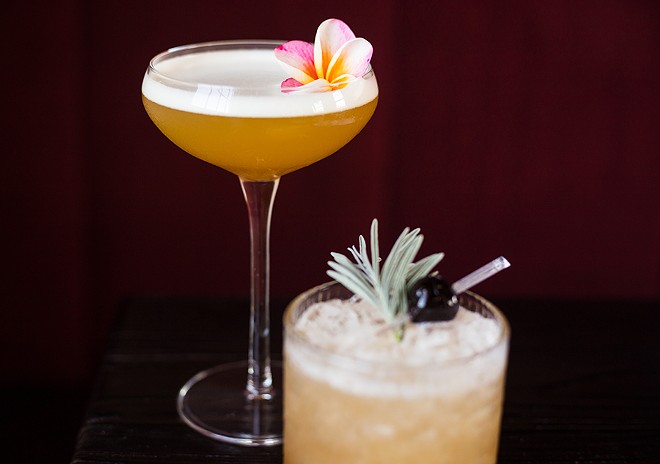 If you'd asked Schmitz and company, they would've been content leaving their restaurant group at two, at least for the time being. Although the partners often talked about new concepts and what growing their business would look like, those conversations were usually more abstract. That changed, however, when they were approached by a realtor friend who was tasked with finding a new tenant for the Element space. At first, the friend was merely seeking their advice as restaurateurs on what to do with the property. Gradually, those musings became more concrete, and the trio found themselves presented with an opportunity to take it over themselves.

Schmitz and his team relished the chance to breathe new life into a stunning place that, while at one time a hotspot, had waned in popularity and ultimately closed. Because they'd all regularly patronized Element, they were able to analyze it with both a customer's perspective and a restaurateur's eye. They also had the benefit of hindsight, seeing what worked and what did not at the two-level space that, while impressive, proved challenging to operate.

Their first item of business was addressing the space itself, which they tackled by combining the restaurant and bar within the building's third level. The move meant that the Bellwether's kitchen is now located on a different floor than the dining room, but it also means that the energy is concentrated into one area. It's a tradeoff that makes the room feel filled and buzzing with life without being crowded or loud.

Though the reconfiguration is the biggest change from the old tenant, the aesthetic shift is also significant. In place of the former cool, industrial vibe, the Bellwether is warm and downright sexy. The luxe velvet and tapestry-appointed room feels like a Venetian café; Moroccan-inspired lanterns give a distinct North African touch. As gorgeous as it is, however, it's hard to compete with the stunning outdoor patio that, if you catch it at the right time, gives a sweeping view of the sunset. Indoors or outside, it's one of the loveliest places in town to dine. 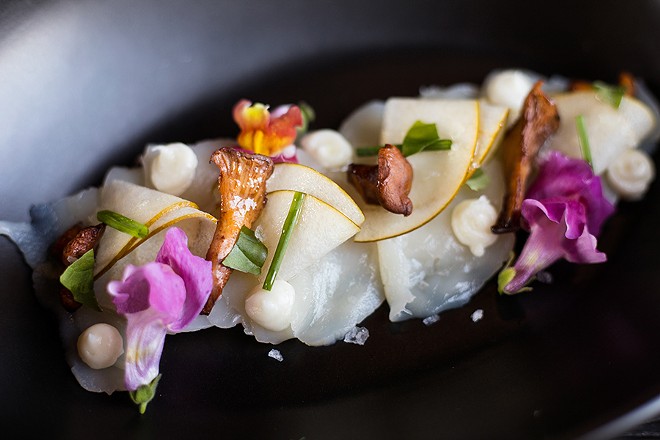 That beauty is not limited to the atmosphere. Under chef Futrell's guidance, the Bellwether is a thrilling restaurant that is eclectic enough to maintain interest without being so far out there that it loses its point of view. Recognizing its place as more of a destination spot than Polite Society, Futrell upped his game, imbuing his dishes with sex appeal that matches the environs. The scallop carpaccio perfectly encapsulates this effect. The thin slices of shellfish are so creamy you feel as if you are eating a tempered pat of butter that melts on the tongue. Slivers of Asian pear bring out the scallops' natural subtle sweetness, and a bacon-spiked lemon vinaigrette adds a whisper of smoke without taking over. If there is a better scallop dish in town, I haven't seen it. 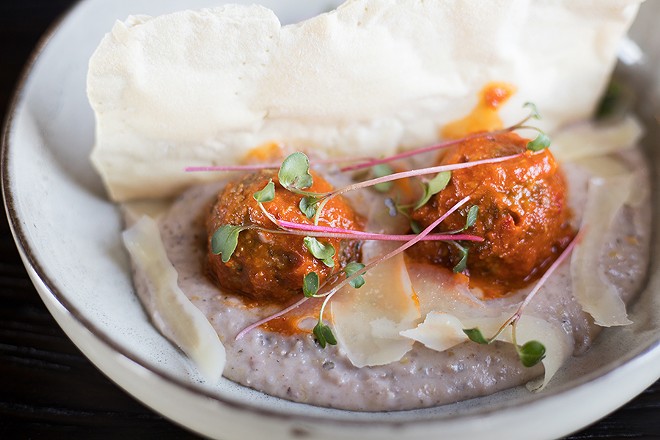 A simple watermelon salad is anything but. Futrell compresses the fruit, concentrating what seems like the flavor of an entire melon into a square the size of a sugar cube. The squares are marinated in sherry vinegar and lime, which adds to their vibrancy, then paired with feta, mint, basil and pickled watermelon rind for a wonderful alternative to a caprese salad. Lamb meatballs are another standout small plate. The meat itself is tender and spiked with heat, but the plate's real highlights are the shockingly creamy grits — so rich you wonder if Futrell is secretly a Southern grandma — and lavash crackers made with lamb fat, a subtle yet powerful touch.

Equally impressive is the red pepper piperade, a Basque-influenced stew-like mélange of tomatoes, poblanos and capers, ladled over a crispy potato cake that resembles a giant smashed Tater Tot. This alone is reason enough to order the dish, but Futrell ups the ante by drizzling the plate with a luscious black pepper cream that is so rich it's like a fresh cheese. It feels like a haute riff on a vegetarian slinger  — in other words, it's perfect. 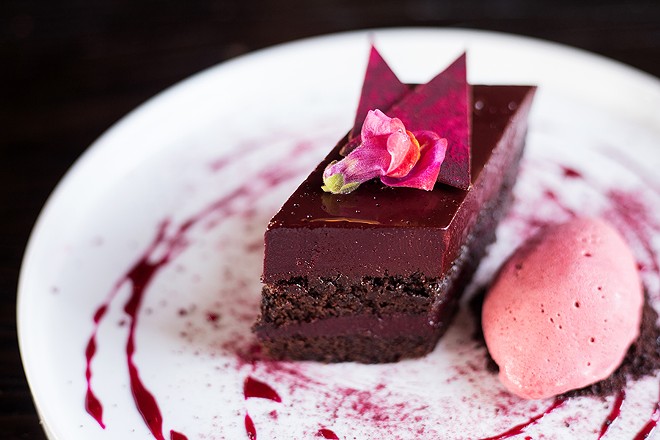 Entree-wise, the butcher's steak provides a refreshing alternative to the tired steak and potatoes template. Here, Futrell rubs the beef in cinnamon and coffee before grilling, then pairs it with fragrant coconut jasmine rice and a peach-chile sauce. The salmon is a more traditional preparation, though no less flavorful. A delicate pea nage and smoked paprika accent the fish. My only quibble is that it was slightly overcooked.

The Bellwether may not be the place you'd think to order a burger, but it should be. The burger is a marvelous mess of perfectly seasoned ground chuck covered in molten sour pub cheese, mushrooms and bacon jam that meld together into a cheesy-gravy concoction so good you can hear angels singing when you take a bite. 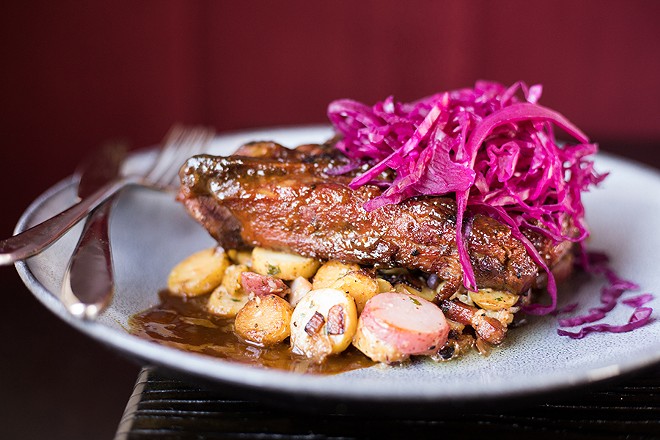 And the pork steak is every bit as good — if not better. Futrell cooks the meat sous vide for eighteen hours, then finishes it on the grill. Inside, it's positively succulent; on the outside, there is a touch of char to give it a suggestion of backyard barbecue. A sweet and tangy Carolina barbecue sauce evocative of a nostalgic brown sugar and ketchup meatloaf glaze finishes the pork. The next time an out-of-town friend visits and wants to know what St. Louis food means, serve them this.

However, the Bellwether's pastas — perhaps its most significant menu difference from Polite Society — may be its biggest surprises. One would never be tempted to call this an Italian kitchen, but Futrell and his team are turning out some of the city's best pastas, like the saffron fettuccine, a wonderful seafood pasta so full of flavor you feel as if the ocean's entire shellfish bounty is contained in each bite. The English pea ravioli is also breathtaking. A hearty ravioli shell is stuffed with ricotta cheese, then smothered with red-wine-braised chicken and peas finished with a mouthwatering sauce made from the chicken's pan jus. Crisp pieces of chicken skin add crunch and salt to this decadent dish. 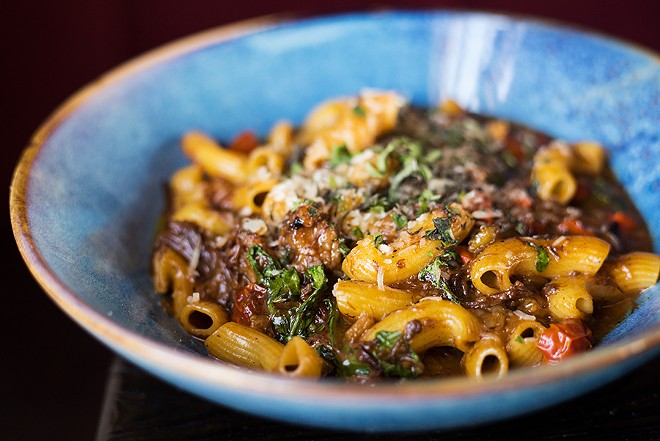 However, the star of the pasta selection — if not the entire Bellwether experience — is the short rib ragout. This masterpiece, comprised of rigatoni noodles, caramelized fennel and braised short ribs, is what would happen if the most talented Italian grandmother home cook was asked to make pot roast. Sherry vinegar and cherry tomatoes are cooked to the point that they burst with flavor, providing a zing of refreshment that cuts through the decadent beef jus. Two weeks later, I am still fantasizing about this magnificent feast. 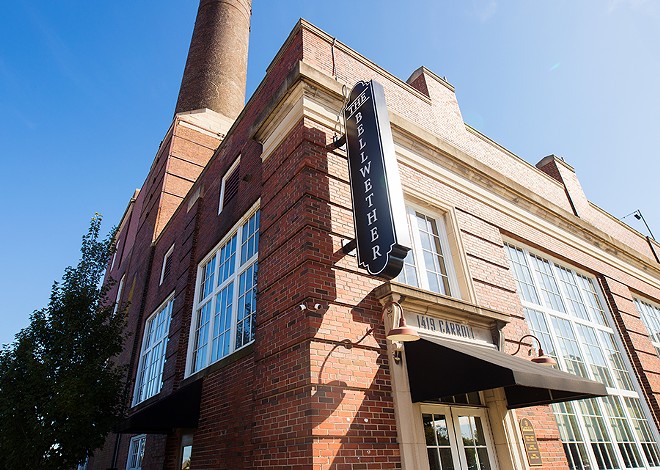 Pairing this dish with a glass of Sicilian red from Hebrank's thoughtfully selected list is about as welcome an escape from the rest of the world as one can hope for. If the space was a respite for Schmitz and company before they got their hands on it, now it's a place you'll never want to leave.