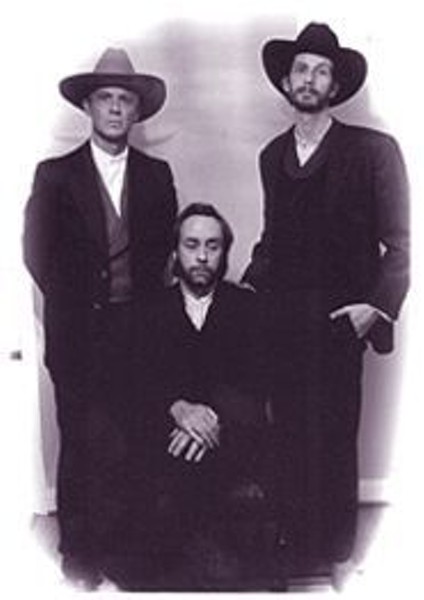 Not only now but in their day, the 19th-century James Gang were models of moral ambiguity. They robbed banks but supported their families; honored the practice of fraternal love, yet manipulated and were betrayed by those nearest, if not dearest. These paradoxes are artfully and enthrallingly explored in Joe Hanrahan's The Ballad of Jesse James. This three-man show presents native Missourians Jesse and Frank, with cohort Cole Younger, as inevitable offspring of the most riven period of American history, the Civil War. Playwright/performer Hanrahan has written a cinema-style narrative, which begins with an extended flashback. He plays Frank as an old man, reliving his wild past in a touring medicine show with equally ancient Cole (Larry Dell, who plays other characters and provides guitar accompaniment). Describing their fantastic exploits, Frank explains, "We all lost brothers," and he's talking about the war as much as the desperado days of the gang.

For these men, geography was destiny, and there was no "compromise." A Union state, Missouri harbored myriad Southern sympathizers who joined rebel bands in groups called irregulars. Frank left home to fight with Quantrill's Raiders at the start of the war and was joined by Jesse, who found a sponsor in "Bloody" Bill Anderson. With a motto ("Lay waste") and a cheer (the chilling rebel yell), the irregulars invaded Lawrence, Kan., in a bitter border war. "He was a natural at this work," comments Frank about Jesse, who takes special relish in quoting from Proverbs while slaying a chaplain.

Barely two years after Lee's surrender, the nascent gang begins a string of robberies to retrieve "carpetbagger money" lodged in local banks. "I never thought of myself as an inventor," Jesse marvels. "Guess everybody's got one good idea." These guerrillas are motivated by justifiable anger about the Union's lingering hostility toward Missourians who'd served on the other side -- and by an appetite for mayhem whetted by wartime. How you gonna keep 'em down on the farm after they've looted Paree?

The skill of Hanrahan's script is that he explores the social and economic conditions that produced the James Gang and manages to seat his argument in a recognizable -- even appealing -- historical moment. There are names and dates in this narrative, but there are also remarkable pieces of stagecraft. Most notable is a scene in which the gang robs its first train (west of the Mississippi, that is -- the Reno brothers get the nod for originating the crime). The cast steps off the stage, and Younger displays a raffish charm as he tells the audience, "We'll not be relieving the lovely ladies." Meanwhile, Jesse terrorizes the engineers and later begins writing press releases, in part as alibis for crimes the gang is unjustly accused of. "Jesse didn't invent the train robbery, but he sure did perfect it," notes Frank.

But trouble looms -- the Pinkerton Detective Agency, guided by the "eye that never sleeps." One pivotal scene is enacted three times (and explained more coherently with each retelling). This portrays the gang's last expedition -- an ill-fated mission to Minnesota (Jesse's idea), where a bank robbery goes awry and the fraternal gang is shot up. Jesse had enlisted Cole's younger brother, much to Younger's displeasure. Scattering to the four winds, the James boys escape; the Youngers surrender. At the weekend's performances at the Missouri History Museum, the dim lighting underscored the shadowy unfolding tragedy, as Cole decides to stay with his injured brother (who miraculously survives long enough to serve prison time).

Jesse James should be required viewing at schools because of its unflinching vision of complexly criminal characters, as well as a believable historical context. This gang is literally a family, depending on others at their risk. (Jesse was eventually murdered by the younger brother of a new recruit, after the Younger men were in jail.) There's no glamour in the bloodshed but plenty of understanding, thanks to a superb cast. David Wassilak plays Jesse as a sternly self-righteous killer who never asks for pity. As Frank, Hanrahan has a curmudgeonly dignity, yet there's a dramatic frisson every time the character slays. Larry Dell imbues Younger with an insouciance -- this is just a job, not a mission -- that's just right. Between vignettes, he provides wistful period balladry on guitar. Director Mary Schnitzler has an agreeably light hand -- one can imagine this story being screamed from the stage, with plenty of gunshot f/x -- but subtlety pays off here. And her skill and the actors' care cut larger-than-life legends down to size.