The 10 Most Important Burritos in Burrito History

Share on Facebook
Tweet
Submit to Reddit
Email
Burritos have been on my mind as of recent, and not just because of the whole pendejada involving Chipotle putting short stories by authors on its cups and bags...none of whom are Latinos. I'm doing something with burritos that will come out...soon, and I think I'm going to have one tonight at 2 a.m. just for the hell of it.

But back to the Chipotle mess: while America loves to gorge on the cylindrical gods, they seem to not care about its past, its history, its pioneers (a topic I cover ad nauseum in my book, Taco USA: How Mexican Food Conquered America). So let's rectify that, shall we? In no particular order, behold the 10 most important burritos in burrito history! 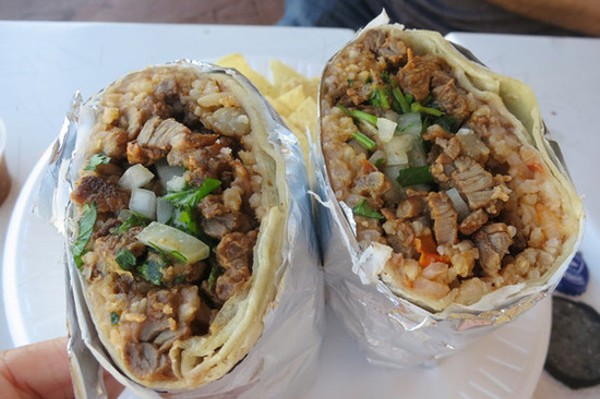 A cylindrical god
While America loves to gorge on the cylindrical gods, they seem to not care about its past, its history, its pioneers. So let's rectify that, shall we? In no particular order, behold the 10 most important burritos in burrito history!
Not the space burrito in question, but intergalactic enough
10. The Intergalactic Breakfast Burrito:
Taco USA begins with the amazing scene of America's astronauts enjoying breakfast burritos in outer space. Astronauts have been eating Mexican food up in the heavens since the 1980s, and what was once considered a joke is now so crucial to the NASA diet that they've spent hundreds of thousands of dollars trying to figure out how to make a tortilla that will last in space for months without rotting. Doesn't matter; according to astronauts, their favorite space tortillas come from an unnamed tortilleria in Houston, which many sneak up with them.
Fergusson's recipe
9. The Earliest-Ever Burrito Mentioned in English:
Burritos are only recent immigrants to the United States. The earliest mention dates back to Erna Fergusson's 1934's Mexican Cookbook. Notice how Fergusson describes them as "little burros," as "burros" is still the name associated in Arizona and Sonora with what the rest of the world calls "burritos." Is there an even-earlier recipe out there?
Another random burrito
8. The Burritos that Fed Braceros:
Burritos did not start getting eaten en masse until the late 1940s and early 1950s with the advent of the bracero program, the joint U.S.-Mexico agreement in which Mexico agreed to subject its citizens to cheap wages (that were still better than what they got in la patria) in American agricultural jobs. To seem like benevolent massas, the American farmers would feed their workers burritos. Only problem? Almost all the braceros came from central Mexico, where flour tortillas were unknown, let burritos. Which meant that braceros despised burritos--welcome to America!
Mission Inn
7. The Frozen Burritos of Riverside:
Gabachos making fortunes off burritos would become a trend, and the best non-Chipotle example is with OC resident Duane R. Roberts. In 1964, he released the first frozen burrito, eventually making millions off of bachelors, school kids, and 7-11 fans. Roberts made so much money that he was eventually able to buy Riverside's iconic Mission Inn and refurbish it. Burritos make AND buy history, folks!
History-making bastards!
6. Chipotle:
As much as Chipotle is annoying me right now, I'm also not going to deny their pioneering status--they're the Rick Bayless of burritos. For it was Chipotle CEO Steve Ells getting "inspired" by San Francisco's Mission-style burrito that America has loved the most. It's Chipotle and its copycats that spread to college towns across America, hooking an entire generation on its foil-wrapped bombs. And illiteracy notwithstanding, Chipotle has done a great job in pushing for the use of non-GMO, non-hormone meats and veggies.
"Where's my burrito?! Where's my burrito?!"
5. The Burrito that Gave Homer Simpson a Scar:
Only fictional burrito allowed, because, hey: it's The Simpsons! Just further proof that it's the most-Latino show on television--until Bordertown comes on the air, at least...
The finest taquería in the Mission
4. The Mission Burrito: No way I'm going to let Chipotle be on this list without the tradition they ape besting it. The ovesized tortilla stuffed with most everything, prepared on a counter, and wrapped in a foil is how they've eaten burritos in San Francisco's Mission District since the early 1960s, when Febronio Ontiveros first started serving them at El Faro. The City's traditional barrio still has dozens of taquerías (the name given to places that specialize in burritos), despite the decade-long gentrification push. Next time you're up there, forsake the Chinese and Italian food and get thee to the Mission.
3. The Burrito That Proved a Burrito is Not a Sandwich:
Qdoba is one of the largest Mexican food chains in the United States, earning its millions by selling burritos. It was also the subject of a lawsuit in Massachusetts after trying to open a spot in a Boston suburb. A sandwich shop in the same shopping plaza sued to stop the move, arguing a burrito was technically a sandwich. A judge threw out the suit, hereby setting a legal precedent than any pendejo knew: a burrito is not a sandwich.
Photo by The Mexican
2. The Del Taco Bean-and-Cheese Burrito:
I've gone on record multiple times proclaiming my love for the Del Taco half-pound bean-and-cheese burrito that costs $1.08 with taxes, and not just because it's so delicious. Eating this burrito is consuming living, breathing history, because the first burritos to capture the fancy of Southern California (the burrito capital of America) were these. Del Taco has not fundamentally changed its recipe in its 50+ years, because why bother with perfection?

And speaking of perfection: The most important burrito in burrito history is no contest...
No pictures of Jesus on a tortilla in our archives, so this
1. The Burrito That Made Jesus Appear on a Tortilla:
Everyone has heard the story about how Jesus appeared on a tortilla in a southeastern New Mexico town long ago--how Maria Rubio set up a folk shrine that attracted tens of thousands of pilgrims for decade until the tortillas tragically shattered. What few people remember, however, is that the tortilla in question was prepared because Rubio was making burritos for her husband's lunch. See, folks? Jesus IS Mexican--so bow before your burrito savior and BELIEVE. Then eat this sacri-licious miracle again and again and again...
More slideshows

The "Moving Forward" Black Pride Festival in the Grove
28 images
1/11
A cylindrical god
While America loves to gorge on the cylindrical gods, they seem to not care about its past, its history, its pioneers. So let's rectify that, shall we? In no particular order, behold the 10 most important burritos in burrito history!
Play Slideshow