If you take a bird's eye view of the last few years, St. Louis' food scene has been all about perfecting various culinary genres. There was barbecue, fried chicken and Neapolitan pizza — and 2016 was no different with its emphatic embrace of ramen.

But the biggest trend in 2016 had nothing to do with noodle bowls per se. Instead, the common thread that unified the city's dining environment was subtler, and much less easily quantifiable: It was the year that chefs and restaurateurs followed their hearts and took the leaps they'd been waiting to take. Whether it was the former culinary educator and consultant who put down roots at his dream café in Southampton, the veteran corporate chef who turned his passion for local food into a CSA-inspired restaurant, or the longtime chef-for-hire who fired up his smoker and showed this town the barbecue prowess he'd always had within, this year, the story is about those who had the courage to show us their true colors.

This theme was also present in the year's most prominent restaurant closing — Gerard Craft's decision to shutter his acclaimed institution, Niche. Citing an overwhelming feeling that the restaurant no longer represented who he was as a chef, Craft transformed his flagship into the family-friendly breakfast, lunch and dinner spot Sardella, which opened too late in the year to be ready for review (it will be considered for next year's list). "We open restaurants we want to eat at," Craft said.

And this year, that's what St. Louis' tastemakers gave us: the places they want to eat at — and as it turns out, that's where we want to eat, too.

When it comes to restaurateurs who followed their hearts, no pair is more representative than Mark Hinkle and Greg Ortyl. The friends met through the Children's Heart Foundation, and this January opened their Webster Groves restaurant as a way to honor the memories of their late sons, Oliver and Oakes. In a phone call earlier this year, Hinkle told me that when he and Ortyl went to look at the building, a small oak leaf blew in and rested on the doorstep at the very moment they were getting ready to step through the doors. He took it as a sign that they were on the right path.

These days, the packed house — reservations book out as much as two months in advance — is the sign that Hinkle and Ortyl are doing things right. Together with chef Jesse Mendica (like Hinkle, an alum of Annie Gunn's), they have created a restaurant that is nothing short of impeccable. Mendica and her team execute everything from blue crab gratin to mammoth steaks with aplomb, bar manager Chelsea Little serves up an exciting cocktail program and the service team makes everyone feel as if they are guests at a terrific dinner party. Olive + Oak has been a phenomenal success, but there's no doubt it's deserved. This is the sort of place that makes you feel like the good guys are winning.

A ramen restaurant may not have been exactly what chef Chris Bork had in mind when he envisioned the restaurant of his dreams, but when co-owners Casey and Jeremy Miller approached him with the idea, he jumped at the opportunity. Having previously worked with the Millers at the Mud House, Bork knew they would give him the freedom to express himself creatively in the kitchen, even if that meant straying from the traditional ramen template.

That's exactly what Bork has done at Vista Ramen, and it's what makes the place such a success. Though noodle soups make up the entirety of the restaurant's entrée-sized offerings, Vista is decidedly not a ramen shop. Instead, it's a modernist canvas for Bork to showcase his immense talent in everything from smoked scallops to Thai sausage to pumpkin miso agnolotti. Bork's kitchen is producing the city's most interesting cuisine these days, earning him a place at the table of St. Louis' top chefs.

When co-owners Christine Meyer and Michael Miller started their freshman effort, Kitchen Kulture, they thought they'd be selling t-shirts. Thankfully for us, the owner of the Tower Grove Farmers Market wouldn't let them hawk their wares without offering food as well. From that market stall, their Asian-inspired, hyper-local prepared foods business took off, gaining them a following that would lead them to open a full-fledged restaurant. Their new spot, Kounter Kulture, is a tiny takeout operation in Lindenwood Park, but what the place lacks in real estate, it more than makes up for in its shockingly big flavors. Every bite at Kounter Kulture — whether it's the sweet, black peppery Japanese fried chicken or the Southeast Asian-inflected shrimp and grits — leaves you scratching your head at how so many disparate yet complimentary flavors can coexist in one dish. They may serve their food out of a humble takeout box, but Meyer and Miller's impeccable cuisine would be at home on the city's finest china.

If you were to judge this book by its cover, chances are you'd drive past Twisted Tree, assuming it must be a generic sports bar serving guests at the adjacent Holiday Inn. I had those low expectations, but must admit I have never been so wrong about a restaurant in my life — and after discovering its pedigree, I understand why it's such a smashing success. The Sunset Hills steakhouse exists as an homage to the Pear Tree, an institution in the rural Missouri community of Bevier that burned to the ground in 2012. Known for its aged steaks, onion rings and batter-dipped lobster tails, the Pear Tree was a must-visit stop for the region's wealthy hunters, who descended upon Bevier in their leisure time. With the help of the Syberg family, the Pear Tree's owners brought the spirit of their restaurant back to life at Twisted Tree, showing even non-hunting St. Louisans why the original place was so legendary. Steaks are wet and dry-aged well in excess of 100 days, resulting in a complex depth of flavor. Just like at the old place, salads are served family-style and come with the restaurant's signature warm garlic croutons, which alone are reason enough to dine here — though if you fill up on them, you might not have room for a slice of "Wedding Cake," a glorious almond buttercream confection that brings tears to the eyes faster than any exchange of vows. 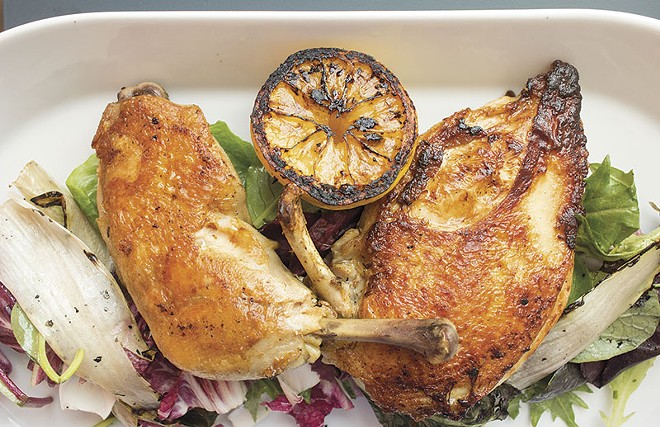 A scholar of the arcane German philosopher Hegel, restaurateur Ben Poremba is so often in his own head that his ideas can seem too cerebral, if not downright odd. So when he announced his vision for Parigi as an Italian restaurant set in interwar Paris, you had to wonder how he could possibly pull it off. But while the idea may have seemed uber-conceptual, the reality makes perfect sense. An Italian restaurant refined by French technique, Parigi stuns with magnificent housemade pastas, bruschetta di caponata and the platonic form of roasted chicken, all prepared under the direction of executive chef Ramon Cuffie. The dreamy setting overlooking Clayton's Shaw Park bears the mark of Poremba's knack for design, incorporating vintage elements with a romanticism that's like a cross between Fellini and the Sistine Chapel. When Poremba says he's going to do something, we should never doubt that he'll go through with it — and do it incredibly well.

Turn the page for more of Cheryl Baehr's picks for this year's best.