As we come to the end of a year seemingly designed to confirm nearly every cynical thought we've ever held, where would we find comfort, reassurance or even optimism? At the movies?

Not so fast, kid. The films of 2017 were, like the year's headlines (or tweets, for those who have already given up on print or hold national office), an assortment of mixed messages. We saw the escalation of a battle over the dissemination and even the very definition of information, as the president picked an almost daily succession of schoolyard fights against those who report the news — even as we saw movies defend the importance of free journalism. We saw racial inequality remain a major problem, but not one unaddressed by filmmakers.

Yet we also saw a rise in gun violence and mass murder matched by films that continue to present such things as defensible or even pretty darn cool as long as the person holding the guns has the right soundtrack. We saw powerful figures brought down by boorish even criminal behavior, and then we saw similar actions endorsed on screen, as long as the perpetrators were suitably labeled as "bad" moms, grandmas and grandpas.

In short, as both a nation and in our films, we were inconsistent and incoherent. Sometimes we stood up to the wrongs of the world; in others, we wallowed in them.

The films of 2017 were sometimes corrective, sometimes cautionary, but nearly always as conflicted and confused as the world they tried to represent. This list of the brightest moments of 2017 includes films that spoke up for change, conceded defeat or sometimes admitted they were just as confused as the rest of us.

British director Ken Loach had announced his retirement a few years ago, but as he watched the rise of the extreme right and the continued failure of the economic system to provide a safety net for the working class, he came back in fury. I, Daniel Blake is the story of a reluctantly retired man trying to find employment only to encounter a lazy and indifferent social welfare system. It's an angry film with a powerfully humanist message, guided by warm, realistic performances by Dave Johns in the title role and Hayley Squires as a young single mother he befriends.

2. The Shape of Water

Take two cultural threads from the 1950s — Cold War tension and monster movies — and stir gently to produce a deliriously charming romantic fantasy. Guillermo del Toro's film is what movies would have been like if Jean Cocteau and Roger Corman had put their heads together and taken over a Hollywood backlot in 1960.

The smartest comedy of the year was both a broad, warm, character-driven comedy and a pointed satire of contemporary economics and business. Director Maren Ade's political commentary wasn't afraid to wear a set of hideous joke-shop fake teeth to make a point.

With his 48th theatrical film, Woody Allen continues to ignore fashion and pursue his interest in the magic of storytelling and the inexplicable power of art, this time aided by Vittorio Storaro's otherworldly photography and an earthy, gut-wrenching performance by Kate Winslet.

7. The Trip to Spain

More great improvisation and dueling egos in Michael Winterbottom's film help Steve Coogan and Rob Brydon preserve their status as international treasures. Coogan also deserves praise for his nervy performance in The Dinner as a character so convincingly irritating that you wish you could reach through the screen and slap him.

Defying categorization, Todd Haynes' adaptation of Brian Selznick's semi-graphic novel was a children's adventure for adults, a dizzying journey through history and a gorgeous collision of movie techniques both classical and modern, with an uncanny performance from young Millicent Simmonds as a deaf girl making her way through the streets of 1927 Manhattan. 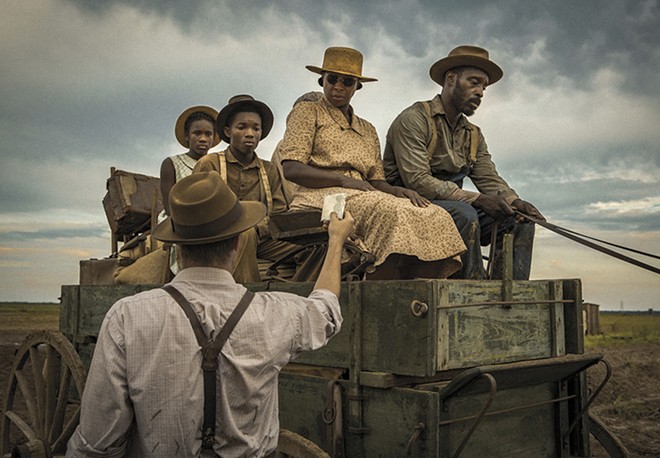 An understated epic about race and class in the rural south during World War II, Dee Rees' film was lifted by a complex narrative, efficient production design and a powerful ensemble of acting talent.

In a good year for non-fiction films, the standouts were Sabaah Folayan and Damon Davis' locally-filmed Whose Streets?, Errol Morris' The B-Side: Elsa Dorfman's Portrait Photography and Matthew Heineman's City of Ghosts.