Thai Kitchen Is So Good, It Should Bring City Slickers to Florissant

By the time Andie Ongartsutthikue immigrated to the United States twenty years ago, she was already a seasoned restaurateur. It wasn't just that she'd watched her mother work in professional kitchens while growing up in Thailand; Ongartsutthikue herself owned an eatery there.

But her U.S. ambitions would have to wait about fifteen years after emigrating. Though she and her late husband briefly owned a restaurant, the stay-at-home mom did not fully realize her culinary dreams until 2012, when she finally opened a place of her own.

That effort, Thai Kitchen, opened smack dab in the middle of an O'Fallon strip mall — not exactly a part of town where you'd expect to find a bastion of authentic Thai cuisine. Ongartsutthikue did not let that stop her; in fact, the area's dearth of Thai restaurants is what prompted her to choose the spot in the first place. Though residents of the exurb may not have been familiar with her offerings, she was confident that her family recipes and fierce commitment to quality ingredients would bring in diners. 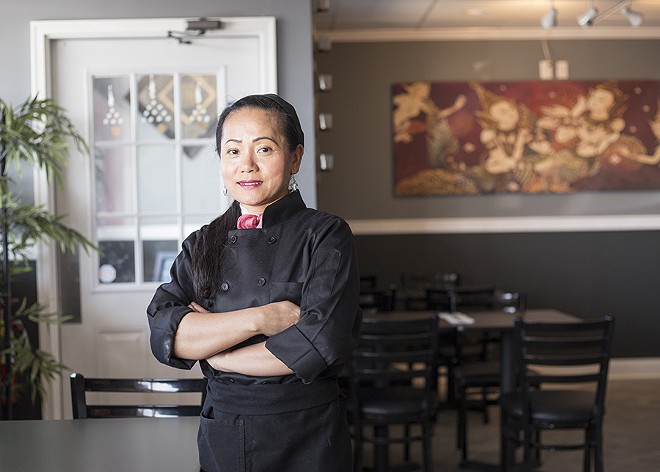 She was right. The O'Fallon Thai Kitchen developed a legion of loyal patrons. The restaurant proved so popular that Ongartsutthikue decided to open a second location this past December, in another unlikely spot: A dated, nondescript strip mall off Lindbergh Boulevard in Florissant.

Unlike O'Fallon, Florissant is not lacking in Thai food, or international cuisine for that matter. The delightful Pearl Café sits just a block or so down the road. In fact, Thai Kitchen is just one in a string of noteworthy international restaurants that occupy this stretch of the Florissant-Hazelwood corridor. There's Pueblo Nuevo, Kaslik Mediterranean Restaurant, the Indian spot Aroma Grill, the small Saudi-inflected café inside Worldwide International market and even a host of Middle Eastern markets. This area may not get as much attention from the trend-setters and food press, but it's no less cosmopolitan than South Grand, which famously boasts cuisines from more nations than Epcot Center. 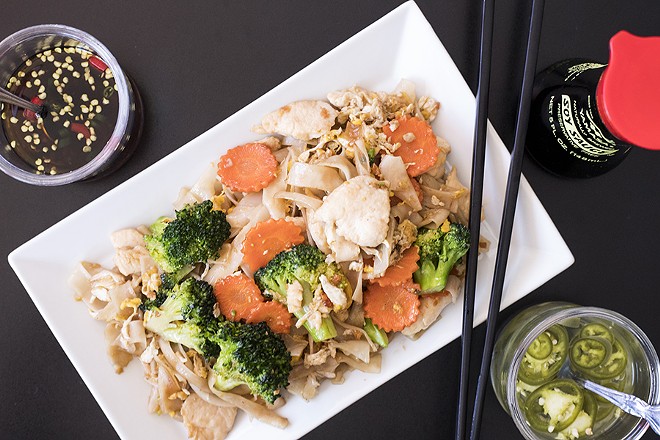 Still, when you pull up to Thai Kitchen, you may wonder if Ongartsutthikue made a wise decision opening here and whether you've made one choosing her eatery for dinner. The restaurant sits between a decades-old tanning salon and an "Oriental massage" outfit (their words, not mine) that add a layer of seediness to the environs — even for this Florissant expat who is no stranger to north-county strip mall dining.

On top of that, Thai Kitchen completely covers its windows with an ornate window shade that prevents prospective patrons from peeking inside. But when you step through the front doors, you have to wonder if the window covering is less about concealing (or keeping out the glare) and more about fostering a dramatic separation from what's outside. The difference in atmosphere compels a double take: The restaurant has the polished, modern brightness you'd find in a renovated home kitchen: sparkling granite countertops, marble-like tile floors and a contemporary color scheme of cool light and dark grays. Thai-inspired artwork, tapestries, statues and dishes decorate the space, just enough to give it personality but not so much as to look like a caricature.

If the look of the restaurant is the initial clue that Thai Kitchen is the real deal, your first bite of Ongartsutthikue's larb gai confirms that impression. Tender ground chicken kissed with fiery red chiles is tempered with a punch of razor-sharp lime juice and fresh herbs. It heats and cools in the same bite, an exciting effect.

Traditional Thai spring rolls are perfection of the form. Herbs nestled into a sticky rice paper roll are so fresh, you'd think they were still attached to their stalks in the garden. Cool mint, tarragon and cilantro marry egg and tofu for a symphony of texture and flavor. If these are freshness embodied, the crispy cheese rolls exemplify richness. Sheets of rice paper are stuffed with cream cheese, rolled up like a cigar and dropped in the deep-fryer. The crispy, golden exterior flakes off in layers like a buttery croissant, revealing its molten contents. Compared to their first cousin, crab Rangoon, these rolls' delicate rice paper wrapper provides a better goo-to-crunch ratio. 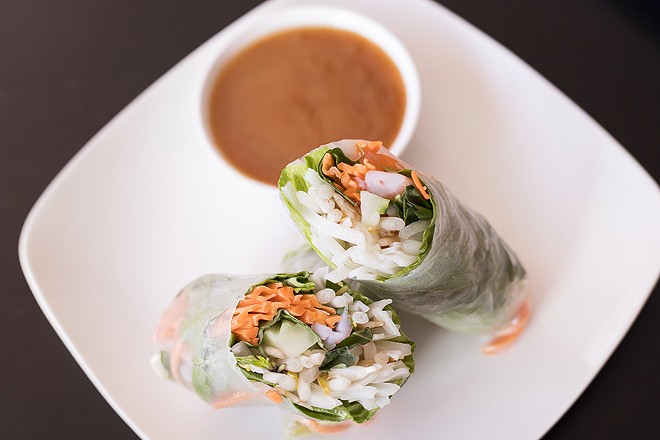 Ongartsutthikue is not afraid of spice, infusing a traditional papaya salad with the sting of red chile that is strong enough to leave a mark. The heat is muted by sweet lime, which dresses the shredded papaya, along with al dente green beans, carrots and tomatoes. Alone, the fruits and vegetables have crunch, but crumbled peanuts provide additional texture.

Thai Kitchen's menu consists of familiar Thai dishes, though the recipes are uniquely Ongartsutthikue's, having been passed down for generations on her mother's side of the family. Her version of the northern Thai noodle soup, khao soi, for instance, is spicier than others. The warm heat is more haunting than assertive, sneaking up on the back palate and lingering. Ribbons of rice noodles and hunks of tender chicken bob in a rich curry-coconut milk broth that is brightened by pickled greens, raw red onions and fresh cilantro. Crispy fried egg noodles add a layer of crunch. In this town, you can't speak of khao soi without mentioning the beloved restaurant Fork & Stix; this version is equally excellent.

A tangier, more tomato-forward presentation of curry is the base of the gang quah shrimp, a rich, brothy concoction meant to be served over rice. Tomatoes and bell peppers accent the savory curry, but the star ingredient is pineapple, cut into chunks and warmed by the broth. This softens the fruit and concentrates it, making each bite explode with juice. Paired with the curry, it's evocative of a sweet-and-sour dish, though infinitely more sophisticated. 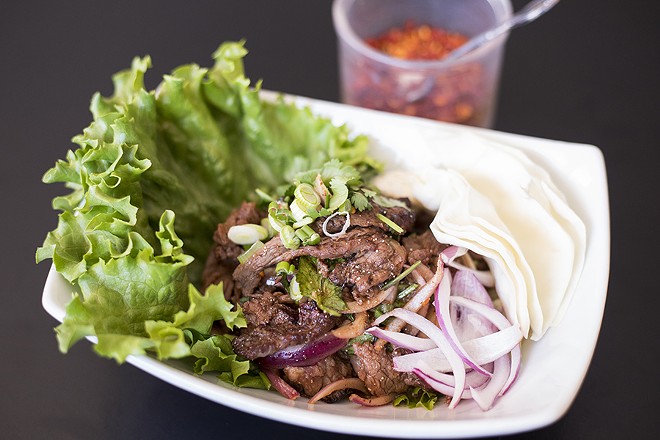 The first bite of Thai Kitchen's nam tok beef sets off fireworks in the mouth — not from its heat, but from the bright lime juice that dresses the meat. The flavors are brilliant and the meat tender and caramelized around the edges. It's flawless.

The only slight misfire on my visits was an off-the-menu Thai basil and crispy pork special. The flavors were exquisite — five spice and star anise fortified the pork cooking jus, and snappy green beans were perfectly cooked. The problem was the pork itself. The meat was chewy, lacking the finesse shown on other dishes.

That finesse was evident in the panang grouper, a marvel of texture. Somehow, Ongartsutthikue manages to keep the fish's exterior crispy even while smothering it in luscious red panang curry. Everyone at the table agreed this was their favorite dish. 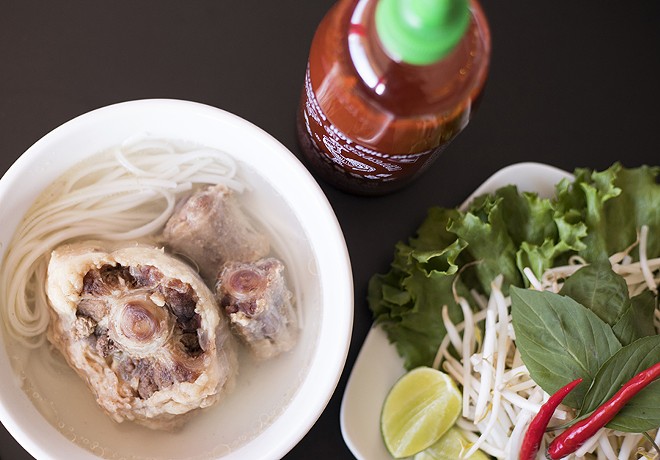 While pho is not traditionally Thai, the style on offer dazzles from Ongartsutthikue's deft touch. The broth is delicate, but also heady with rich beef flavor. Unlike other versions of the Vietnamese soup, this one has simple flavors; there's no star anise, cinnamon or sweetness — just pure beef flavor like a light consommé that dances on the tongue. Slices of rare beef poach in the liquid alongside rice noodles and traditional accoutrements (jalapeños, bean sprouts, basil, lime) that infuse the liquid with flavor. It's pure warmth, evocative of the simple pleasure you get from a grandmother's chicken soup.

The reference to childhood comfort is also literal: Thai Kitchen offers a delightful kids' chicken noodle soup that appears to be nothing more than pieces of meat and rice noodles. The broth, however, has a subtle umami depth, spiked with enough soy to be interesting, but not too much to offend a youngster's picky palate. 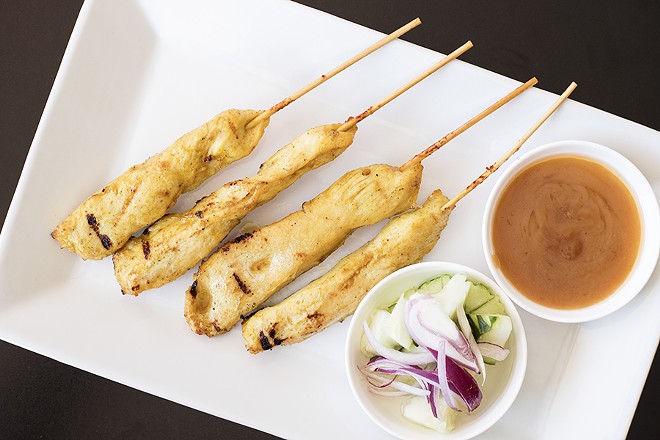 That Ongartsutthikue offers such a quality children's menu shows just how much thought she puts into her restaurant — including the location. On the surface, that Florissant strip mall — or a St. Charles County one, for that matter — may not seem like the ideal place for a top-tier Thai restaurant, but Thai Kitchen will make you check that preconception.

And that's a good thing. After all, who wants to live in a bubble when such wonderful family recipes traveled halfway across the globe to get here — and all you have to do is drive twenty minutes north to enjoy them?