PHOTO BY MABEL SUEN Guests try their hand at the taps at Tapped.

If you want to know why a place like Tapped needs to exist, consider the scene that played out during one of my recent visits. A gaggle of beer bros had gathered in front of the restaurant's self-service taps and were engaged in a robust conversation designed to show off their esoteric knowledge. Though they'd assembled in front of the section devoted to stouts and porters, a couple of them wandered over to the IPAs, likely pontificating on the virtues of New Zealand hops versus U.S. Cascade ones. As the group made their way back to their table, one lingered and — after looking around to make sure he was completely alone — dumped his glass. Then he walked over to the fruit beers and poured himself a blood orange radler.

I could be entirely off base here, but I'd bet the farm that this noble imbiber of what's basically the beer version of orange-ade didn't advertise his choice to his buddies for the same reason I'll choke down a 1000 IBU brew after being beer-splained by a cicerone: shame. We can debate whether this is an internally or externally motivated phenomenon, but for some reason, the act of drinking — one of the most intimate and subjective things a person can do — comes with the notion that there is a right and a wrong way to do it. Ask for white zinfandel and you have bad taste. Put cream and sugar in your coffee and it's sacrilege. Request a straightforward, decidedly un-hoppy lager and, well, you obviously know nothing. In certain sets, the snobbery can be palpable.

Lindsay and Ryan Reel didn't explicitly set out to buck this phenomenon and create a craft beer safe space, but it's a welcome byproduct of their quest to bring a new beer and wine tasting experience to town. After visiting a self-pour wine bar in New Orleans, Lindsay Reel was floored by the setup that allowed her to taste a wide range of wines without the investment of an entire bottle, or for that matter, an entire glass. She was certain she had a great idea for a restaurant. 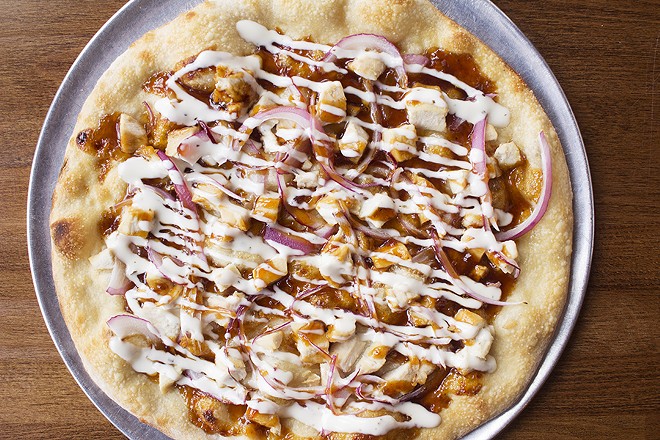 Though not industry professionals (she's a pharmacist; he's worked in retail management), the Reels had always dreamed of opening a restaurant and bar, but they weren't willing to put their careers and life savings on the line for anything less than inspired. Once Lindsay Reel experienced the New Orleans wine bar, she knew she'd found just that. She began doing research on self-pour systems.

The Reels knew that, in a beer-loving town like St. Louis, they would have to find a way to serve both wine and beer on tap, but it took finding the I-PourIt system to figure out how to do both. That accomplished, they set to work developing a beer-centric tasting room concept.

If finding the system was difficult, finding the right location proved easy. The Reels were regulars at the Maplewood restaurant A Pizza Story, so when that spot closed, they knew it would be perfect for Tapped. They connected with the owners of A Pizza Story and worked out a deal to take over the storefront and purchase the wood-burning pizza oven, recipes and other restaurant infrastructure. After giving the place a light remodel, the Reels opened their first-of-its-kind in Missouri tasting room in early May.

A self-pour bar might inspire images of out-of-control debauchery, but Tapped is subdued and orderly. Upon entering, patrons show identification and a form of payment. They're then given a watch-like wristband with a fob. A wall of 48 beer taps lines one side of the room (roughly eight wine taps are on the other side in the corner), each with its own wood-framed electronic tablet listing the beer's name, style and tasting notes. To pour a beer, you simply grab a glass from the shelf below the taps (yes, beer nerds, they offer different glassware for different styles), scan your fob on the tablet of your beer of choice and drink away. You're charged by the ounce, so you can have as little or as much as you like — just not too much. The system will cut you off after you've consumed 48 ounces.

Beer, and particularly regionally-produced craft beer, is why you visit Tapped, but the Reels wanted the food to be more than an afterthought. Drawing inspiration from the low-key pizzerias they've frequented on trips to California wine country, the pair created a menu of upscale bar food anchored by the wood-burning oven left over from A Pizza Story. Though they bought the former tenant's recipes, Ryan Reel tweaked the dough, adding in Six Mile Bridge hefeweizen, which gives the crust a yeastier flavor and heftier texture. It serves as the base for several different pies, including a margherita that pairs a basil pesto drizzle with fresh mozzarella and sliced tomatoes. Though not authentic like its predecessor, it's a respectable, pleasantly gooey riff on the classic.

An asparagus and coppa pizza delivered both ingredients as promised, though the latter was more like thick-sliced ham than the paper-thin charcuterie I'd hoped for. A blend of five Italian cheeses provided ample goo, though it also masked most of the other flavors on the pie. It's a fair option, though I'd opt instead for the "Tapped BBQ," a well-executed version of the ubiquitous barbecue chicken pizza that features a piquant bourbon-based barbecue sauce as the base. Red onions add texture and punch, and ranch dressing provides a cooling factor for this sneak-up-on-you spicy dish. 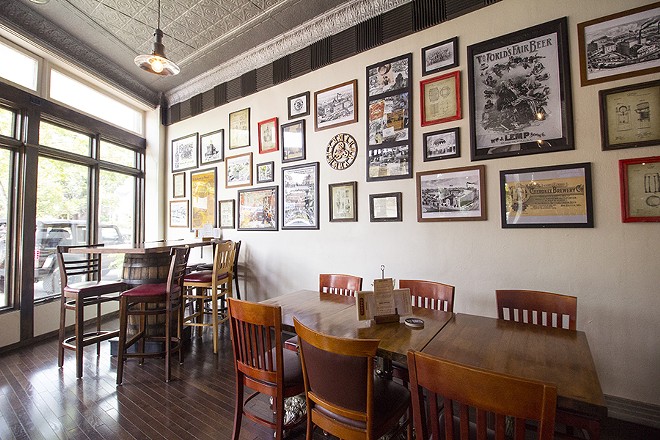 In addition to pizza, Tapped serves updated takes on traditional bar food, like excellent disc-shaped ravioli filled in-house with ground beef, herbs and cheese. In place of the standard marinara, a chunky tomato bacon jam serves as a dipping sauce. Though understated in its pork component, it proved so tasty, I gobbled it up with a fork.

Spinach artichoke Rangoon is a take on crab Rangoon that replaces the crab and cream cheese with rich, though not especially flavorful, spinach dip. Another appetizer, the Bavarian pretzels, are exactly what you'd want at a beer hall — plump, pillow-soft and covered with salt. A whole grain mustard sauce is provided for dipping, as is a creamy, though generic, nacho cheese-style sauce.

Tapped's wings are plump, juicy and covered in a delectable spicy bourbon glaze that tastes like a cross between bourbon barbecue and soy sauce. Red pepper flakes are liberally incorporated in the glaze, giving it a heat that is significant but not obnoxious. 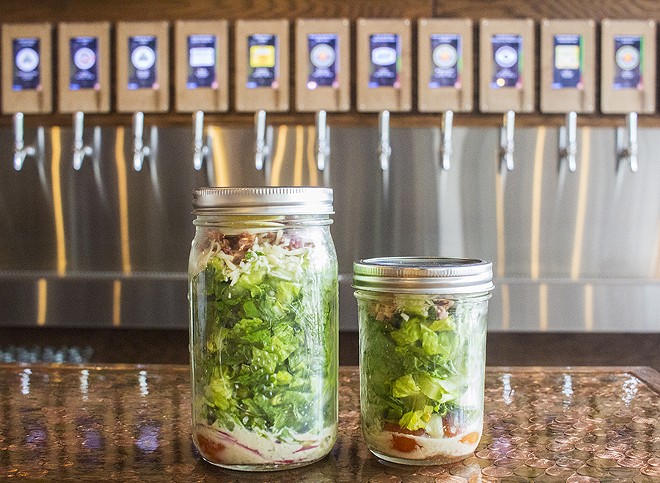 A selection of sandwiches is also available, including beer-battered cod served on a hoagie with straightforward tartar sauce. The fish has a pleasantly crunchy texture; my only issue is the way it's engulfed by the large bun. The stars of the plate are the jalapeño-flecked hush puppies, which should be a dish in and of themselves.

You could get the "Killer Hoagie," stuffed with a gigantic kielbasa and sauerkraut. Then again, you could also get the sausage and kraut plate, which would allow you to feast on two pieces of this magnificent sausage. The kielbasa is not house-made; Ryan Reel admits they simply buy it and cook it, though that shouldn't take away from this glorious, maple-essenced beast of a sausage. The meat is grilled to the point it splits open, revealing pockets of char and grease that beg to be paired with a beer. This is the best thing at Tapped.

Actually, I take that back. The best part of Tapped is made clear in a little tidbit Lindsay Reel explained to me. When she and her husband were putting together the restaurants' drink selection, they were encouraged to carry certain beers that were the top sellers at other restaurants around town. They agreed. But to their surprise, these beers have sold significantly less than some of the other labels. 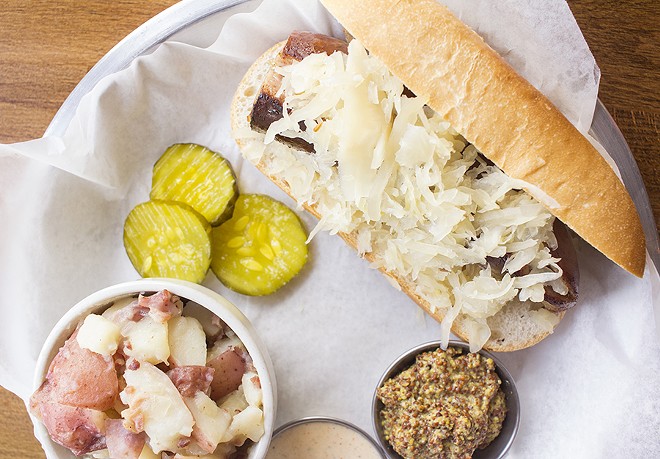 Lindsay Reel attributes that to how easy it is to try different things at Tapped; the investment in a two-ounce pour is so low, she posits, it encourages people to delve into unfamiliar territory. When they do, they often find something they like even more than their standard go-to.

I like her theory, but I'm convinced there's another reason for the discrepancy: When left to make our selections in private, we're guided not by what we think we should drink, but instead by what we want to drink — as long as our friends aren't looking.