If you order the Mexican Flag Burrito at Taco Circus — which you absolutely must — you'll notice several things: its utterly jaw-dropping heft, the succulent pork steak carnitas that are so overstuffed into its flour shell you wonder how it doesn't burst, the perfectly placed trio of queso blanco, salsa verde and salsa ranchero that evoke Mexico's flag, and an actual tiny paper flag, planted onto the burrito, that pays homage to our southern neighbor's indelible impression on U.S. food culture.

In the five years since opening Taco Circus as a humble diner in Bevo, Christian Ethridge has planted his own flag in St. Louis as the unofficial king of Austin-style Tex-Mex. When he first moved to town, he did not have such lofty intentions. He'd simply followed his then-wife here so that she could attend Webster University's film school and ended up cooking in kitchens around town to support his family.

However, something about the St. Louis food scene struck him, a feeling that stuck with him even when he returned to Austin following his ex-wife's graduation. Ethridge had always loved cooking, and he dreamed of opening a place of his own one day. Thinking back on his time in St. Louis with its growing restaurant community and low cost of living, he couldn't help but feel that to make those dreams a reality, St. Louis might just be the right place to go. With a restaurant idea in his head and his dear friend Mikey Carrasco by his side, he again set off for the Midwest to open Taco Circus.

Originally, Taco Circus wasn't even supposed to be as big as the tiny, diner-style setup that characterized its first incarnation. Ethridge had always planned on serving Tex-Mex, but he wanted to do so as a drive-through restaurant. As he looked around town, though, he quickly realized that the buildout on a prime, corner location that the drive-through concept required would cost far more than the shoestring budget he had to spend. Instead, when he stumbled upon a small storefront in the Bevo neighborhood, he decided to pivot to a taco-counter setup like the ones he'd grown up visiting in Austin.

Ethridge's bet that his brand of Tex-Mex would play well in St. Louis paid off. Taco Circus became an immediate success, generating buzz not just for its wonderful food, but for his and Carrasco's insistence that they approach their quick-service food with the care and ethics often reserved for upscale dining. This meant sourcing quality local ingredients such as ethically raised meat and produce as well as making as much in house as possible. It was a heavy lift for a small daytime spot, but their efforts paid off in the form of a loyal following and serious buzz that made them one of the city's favorite taco spots.

As popular as Taco Circus was perceived to be, its business was inconsistent. As Carrasco tells it, the restaurant did great business on the weekends and could draw a somewhat consistent crowd for dinner during the week. However, because it was tucked away into a neighborhood, the weekday lunch business was not enough to sustain the restaurant. Though Carrasco loved the place, he knew he needed a change and left the restaurant.

Ethridge still planned to shift to the drive-through taco shop he'd always wanted. He'd even started looking around at spaces but was stopped in his tracks by an offer he couldn't refuse. Sean Baltzell and Casey Colgan of the Grove arcade bar Parlor had recently taken over the former Three Flags Tavern space in Southwest Garden, and they were looking for someone to assist them in bringing to life their vision for another nightlife hot spot. They knew of Ethridge and Taco Circus and thought it would be the perfect fit for the space. 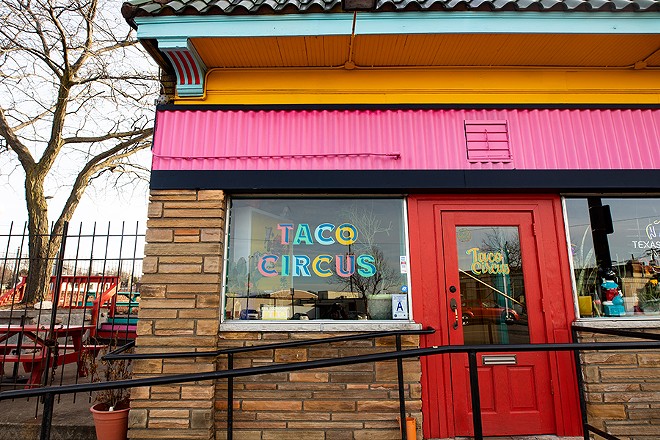 As soon as he looked at the building, Ethridge knew he'd found his spot. He loved the feel of the interior and was completely enamored with the patio, envisioning it as a lively destination for day-drinking, happy hour and late-night cocktails — exactly the sort of thing that was missing at the original Taco Circus. He agreed to help, and the partners got to work turning the former upscale restaurant into a vibrant Tex-Mex joint. 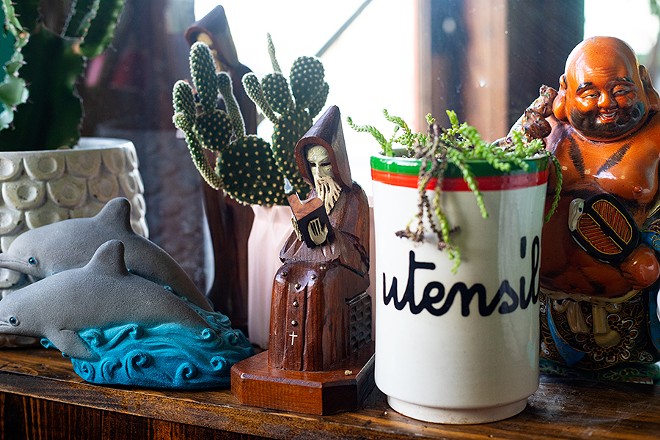 Ethridge's aesthetic point of view is undeniable at the new Taco Circus. A former graffiti artist with a playfully irreverent streak, he's outfitted the restaurant and bar (two separate rooms) in neon pink paint, wacky tchotchkes and campy posters and psychedelic artwork. Outside, brightly colored wooden picnic tables dot the large patio, and a multi-colored geometric mural on the fence serves as an eye-catching backdrop.

Ethridge wanted the restaurant to be over-the-top fun in both looks and food, and he has delivered on both. The talented Cesar Correra is now leading the kitchen and Carrasco has returned. The aforementioned Mexican Flag Burrito is a masterpiece of the form, not simply for its flashy details but because of its flavor. Pork steak carnitas, one of the optional filling choices, melts in the mouth thanks to the luscious ribbons of fat running through the meat. Creamy queso blanco underscores the richness, while bright salsa verde cuts through it. The highlight of the sauces, however, is the warmly spiced red ranchero sauce that kisses the dish with smoky sweetness. Forget Maull's: This is what you want slathered over your pork steak any day of the week.

The Vegetarian Feast version of the classic fajitas may lack the meaty heft of the pork-steak-filled burrito, but it is equally satisfying. Taco-seasoned Match Meats "beef" is so juicy and rich, it could easily be mistaken for ground beef. Alone, it would be a wonderful fajita filling, but the Taco Circus team cannot be contained, filling the platter with piquant escabeche, seasoned rice, creamy refried beans and guacamole. It's enough for four people to share, though the wonderful flavors make that a difficult proposition.

Taco Circus' huevos rancheros, a.k.a. the St. Cecelia Plate, are exactly the ridiculous hot mess they should be. Ground beef, barely drained so that its rendered fat mixes with its New Mexican red chile seasoning, completely smothers a platter of tortilla chips, rice and refried beans. Melted cheese and four eggs crown the dish, though the eggs were the one disappointment; they were advertised as being served "sunny" yet they arrived overcooked and browned. At first, I thought this was a flaw of the kitchen, but after reviewing my receipt and seeing the modification "over-hard," I understand this to be a server error, not a cooking one, but it still detracted from the overall dish. 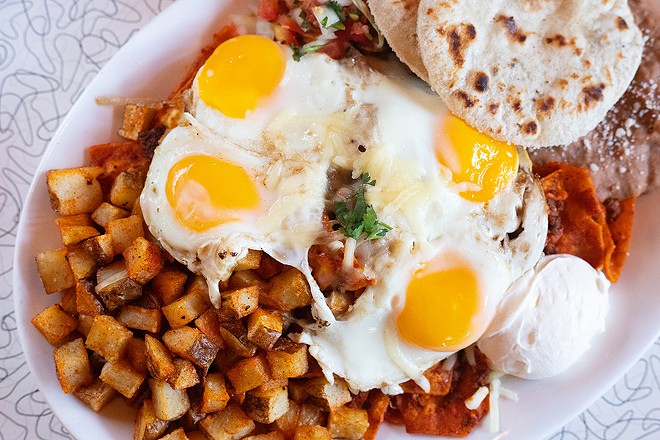 Fans of the original Taco Circus can rest easy: The breakfast burritos are just as wonderful as they were at the old place. Overstuffed with fluffy eggs, cheese, seasoned potatoes and sage-infused breakfast sausage, these warm roll-ups of comfort make you understand why Ethridge's efforts generated so much buzz in the first place.

The restaurant's namesake dishes also show that it has not lost its touch in the move. Simple street tacos are anything but thanks to the wonderful, flawlessly cooked meats that grace their housemade tortillas. The al pastor pairs succulent, lightly seasoned pork with juicy pineapple that infuses the savory meat with tropical sweetness. Even more dazzling, the grilled chicken thigh al carbon features tender dark meat kissed with grill char that is enhanced by its pleasantly bitter spice rub. This wonderful meat, wrapped up in a plain, warm tortilla, is all you need to know that Taco Circus is the real deal.

The fillings for Taco Circus' tacos are so flavorful, they shine with minimal trimmings. However, the restaurant cannot help but show its playful side, offering a selection of Kingshighway Tacos that are dressed with different garnishes according to each one's personality. The Broadway is the restaurant's take on the taco nights of a Midwesterner's youth: a wonderful mess of ground beef dripping in cooking liquid and chile seasoning that's liberally dressed with tomatoes, lettuce, cheese and sour cream. An authentic Mexican taqueria offering this is not — which is precisely the point. It pays homage to the nostalgia of American-style Tex-Mex.

The Tijuana Fish Taco is another outstanding offering. Made using pangasius swai, a Southeast Asian catfish, the flaky white meat is delicately breaded in cornmeal and, though fried, is not at all greasy. Rich Mexican-style street corn and vibrant tomatillo cream pair beautifully, giving the taco a Southwest flourish. 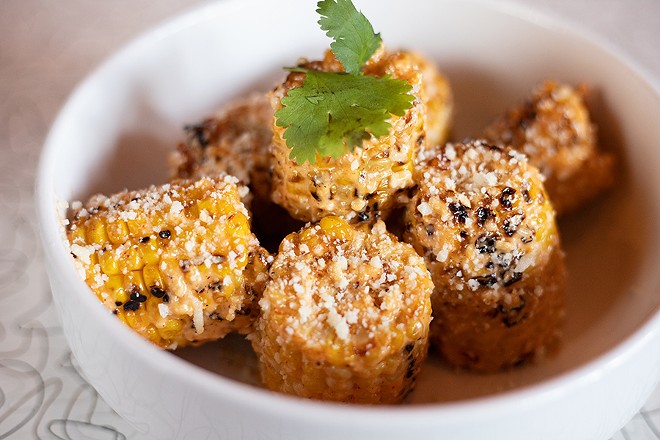 The portions at Taco Circus can be downright monstrous — an intentional decision by Ethridge that nods to the larger-than-life Tex-Mex spots he grew up frequenting in Austin. Do not let this dissuade you from ordering appetizers like the spicy bean dip, a fiery, deconstructed take on seven-layer dip, or the chips and queso, which serves a dip so velvety and subtly seasoned you'll want to pour it over everything. However, the first-course standout — and one of the standouts of the entire Taco Circus experience — is the street corn. Served on the cob but cut into manageable, two-inch-thick pieces, the corn is grilled with the perfect amount of char, then coated in a layer of mayonnaise, sour cream, lime juice and chiles that is restrained enough to not cover up its natural flavor. It's magnificent.

The only thing capable of erasing your memory of that glorious street corn is Taco Circus' Purple Margarita, a cocktail so strong it comes with a warning and a two-drink maximum. Of course, you wouldn't expect less from a bar inside of what's become St. Louis' biggest restaurant party — Ethridge's approach for Taco Circus all along. Now that all the pieces are finally in place, his impression on the city's food scene is bigger and better than ever.