The Survival of David Clohessy

DANNY WICENTOWSKI After nearly 30 years of leading SNAP, David Clohessy reflects on a career of controversies, press revelations and the battles still to come.

During one of our recent interviews, I ask Clohessy to reconcile the apparent contradiction. For years, a handful of conservative Catholic blogs and religious pundits, most prominently Catholic League President Bill Donahue, who once called Clohessy "a con artist driven by revenge," pounced on the easy argument: that Clohessy is a hypocrite.

After all, here was the head of SNAP, protesting in front of churches, demanding bishops divulge names and histories for priests accused of abuse, and yet ...

"For nine years," Clohessy says, completing my sentence, "I knew about my brother and didn't call the police."

But to say that Clohessy failed to act isn't, strictly speaking, the truth. After first learning that an abuse allegation had followed his brother out of a parish in 1993, he says he confronted Kevin over the phone — and went as far as contacting police departments in the Missouri towns of Kirksville and Taos.

He says those efforts came to nothing. He didn't have any evidence to offer, didn't know of any witnesses or even how many victims might be out there.

Still, the case presents a distinct contrast: Over the years, Clohessy and SNAP had launched numerous public campaigns to alert parishes to the past presence of accused priests — sometimes coming right out and calling them "predator perps" before lawsuits had been filed.

Asked about it now, Clohessy maintains there was no hypocrisy and that he did exactly what he would have advised another survivor in the same situation to do.

"During that period, we were painfully aware of what it took to 'out' a priest," he says. "I knew what it took. Kevin never admitted it, never been charged, never been sued. A church employee had reported him and nothing happened. Is there any reason for me to think that if I said, 'Hey, I think he did it, too,' that the bishop would do anything different? Of course not."

When it came to his brother, Clohessy was on his own, and out of the spotlight. He called the cops, called Kevin and says he gave his blessing to "dozens" of reporters persuing the story. Many considered it, but nothing hit the public eye until the Globe's piece in 2002.

That piece had a lot to do with Clohessy. He says he connected the Globe reporter with Donna Cox, knowing that her story would intersect with Kevin — and he knew this because Cox was the one who first told him that church officials had removed Kevin from service in 1993.

Still, this was hardly the first reporter he talked to about Kevin. As the New York Times' Bruni would later write, Clohessy thought it was unlikely the Globe would publish his brother's name, since he had never been formally charged or sued.

That is, until the diocese itself put it in the public record. In 2002, church officials in Jefferson City confirmed to reporters that a credible accusation had been made against Kevin. It was out in the open.

Today, there's almost no trace of Kevin Clohessy. It appears he worked for a time in a funeral home in Columbia until at least 2012, and his funeral director's license is still active with the secretary of state. From there, the trail goes cold.

Clohessy's actions would forever damage his relationship with his parents. They believed Kevin had been falsely accused, and that rift was never fully healed. The brothers have barely spoken in the last two decades. Clohessy says their last substantial conversation was in the 1990s.

There is no easy reconciliation here. Two boys, both abused by the same priest, went on to lead very different lives. Kevin was compelled to stay in the church, and he was protected, at least temporarily, by its fortress of secrecy. David left the church and tried to tear its walls down from the outside.

It's complicated. It's simple.

"The safest, easiest thing to do, at any time, in any situation, is to do nothing," Clohessy says. "Ultimately, the plain and simple truth is I did out my brother. I did what I thought I could do. I don't know how I could live with myself if I didn't." 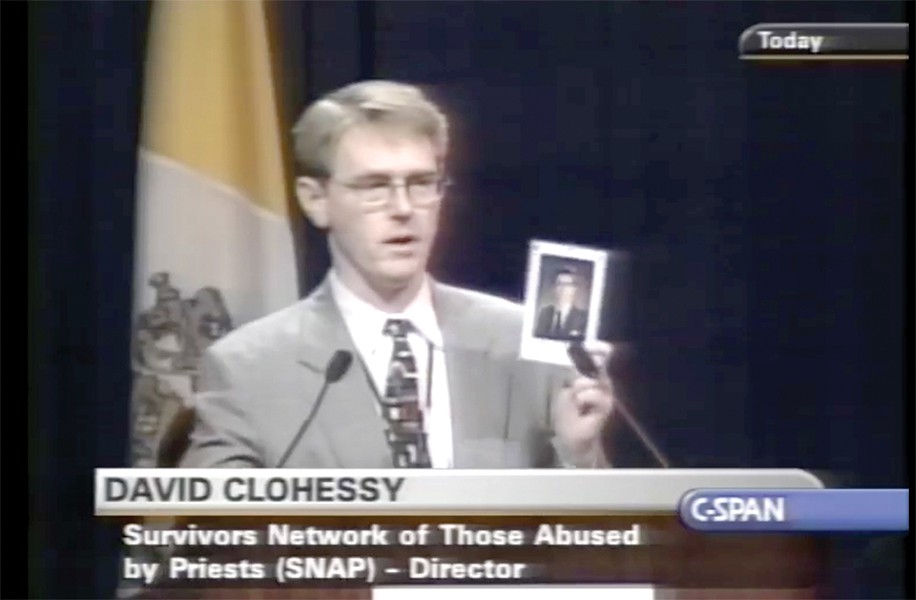 David Clohessy leans back on the living-room sofa and watches his black-haired poodle, Vinnie, snoring in a furry pile by his lap. This is the sofa on which Clohessy often falls asleep while wearing the prescribed medical compression garments that help move fluid around his body, a task which, until recently, was accomplished by his now-removed lymph nodes.

"I'm not ever going to be 100 percent again," he admits. "One of my greatest failings is that I'm not able to maintain balance. This crisis can so easily become all-consuming for me."

That's what a crisis does, though. It consumes. And in 2018, Clohessy couldn't sit the latest crisis out, no matter what his title at SNAP was.

In August of that year, the Pennsylvania Office of Attorney General released the result of an explosive two-year grand jury investigation, which had evaluated hundreds of thousands of pages of documents and heard testimony from dozens of witnesses. The report named 300 priests, who were accused of abusing more than 1,000 children in cases stretching back 40 years.

And for the first time, Clohessy notes, the report named bishops, the "enablers," as he calls them, who shuffled previously accused priests to other parishes in the diocese — or, in the case of nine Pennsylvania priests, relocated them to Catholic rehabilitation facilities in St. Louis.

Clohessy turned up outside the Cathedral Basilica of Saint Louis to protest and demand the archdiocese release more information on the priests and investigate whether there were other local cases of potential abuse — the same sort of demand he's made hundreds of times in the past.

There are some things that were different, however, from the SNAP of old. Barbara Blaine, whose mid-support-session laughter had sparked an epiphany for Clohessy, had died suddenly of a heart condition only a few months after her own resignation from SNAP in 2017. The third member of SNAP's longstanding triumvirate, Barbara Dorris, who served as the outreach director, also resigned that year. (Reached by email, Dorris declined to be interviewed for this story.)

But SNAP is moving on. In 2018, SNAP'S board appointed Zach Hiner, a former assistant to Blaine, as the group's new executive director. Its website lists dozens of support groups for victims, including St. Louis.

In 2015, Clohessy again approached the diocese in Jefferson City about the "effects of betrayal" he suffered during four years of abuse by Whiteley. He asked the diocese to post names of problem priests, warn Catholics living near Whiteley's home in Florida and pay $200,000 to cover the cost of decades of therapy. This time, the diocese responded, eventually writing him a check for $40,000 but rebuffing his other requests.

The progress for victims has been slow like that. Clohessy, though, shows no signs he's looking for an exit strategy. There's too much to do: The attorneys general in Missouri and Illinois launched investigations in the wake of Pennsylvania's, but Clohessy has already condemned both for being "woefully inadequate" projects for relying on the church's voluntary disclosure of personnel files.

This is the next chapter of the story, the one which Clohessy and SNAP helped author for nearly three decades. Dioceses across the U.S., which for so long resisted naming priests, are now falling over themselves to do so.

"Bishops see the writing on the wall," Clohessy says. "They see that unless they make belated, grudging, pseudo-reforms, judges and lawmakers are going to make real reforms."

That substantive legal action is what Clohessy still waits for — he wants the legislature to amend the laws around statute of limitations and create a "civil window" for victims to sue their abusers as adults. He has little regard for the Missouri attorney general's announcement in September that it had found 163 priest abuse cases in the files of the Archdiocese of St. Louis since the release didn't include the priests' names and only twelve of those cases are still prosecutable.

Five months have passed, and none of those cases have progressed to criminal charges. Clohessy isn't holding his breath. He wants Missouri to empower its attorney general, Eric Schmitt, the way Pennsylvania did its own Josh Shapiro — with a grand jury and a fusillade of subpoenas, the sort of resources needed to drag a full accounting of the state's predator priests into the light.

For Clohessy, that day in 2002 when he faced the bishops in that Dallas hotel was just the beginning of a story he knows will outlive him. It's a simple story, of victims taking action in the face of stupefying odds. It's a complicated story, filled with impossible choices, broken families and endless lawsuits. But it's what comes next that matters most.

For Clohessy, Goliath isn't the church — it's the things that keeps survivors silent, alone and unbelieved. It is power. It is institution. And Goliath still stands.

"What gives me hope is that every single day, a survivor tells their husband, their mom, calls the police, calls a journalist, goes to AA, gets their GED," Clohessy says. "We were once powerless, we're not powerless now, and I would beg victims of any kind of violence anywhere: Err on the side of action."

Clohessy's own place in history began with action. It was during that 2002 speech to the U.S. Catholic bishops, which is preserved in video by C-SPAN archives.

At the time, Clohessy was busier than he'd ever been, fielding dozens of calls per day on the SNAP phone lines. He heard from victims who were just starting to understand what happened to them. They were survivors who had recognized their abuser's name in a Spotlight story. They were people who had believed, for years, that maybe they really were the only ones.

It just couldn't be.

As he spoke to the bishops that day, Clohessy reached inside his jacket pocket and produced a photo of 27-year-old Eric Patterson, one five cases of suicide involving five former altar boys. The story of their alleged abuse by a Kansas priest would be reported one month later in devastating detail by both the Wichita Eagle and Boston Globe. The stories would eventually lead to criminal charges — and so Clohessy was beating the newspapers to the story. Of course, the bishops would read the details soon enough, but he was going to tell them about it anyway.

"One perpetrator, some of you may know of," Clohessy said, his words struggling through his tears. "Father Larson in Wichita Kansas. Five young men — He sexually violated five young men, and five of them have taken their own lives."

Clohessy held up the photo. He said Eric Patterson's name. And then he did something that, oddly, is not included in the written version of the speech currently available on the website of United States Conference of Catholic Bishops.

Clohessy asked the crowd to pass the photo around the room. He asked them "to think of Eric, and say a prayer for him and his family."

Clohessy left the stage, and the C-SPAN camera tracked him as he approached the nearest table, his hand extended with the photo of a dead young man. A bishop took it.

The camera followed the photo as it was passed, hand to hand, bishop to bishop, down the line.