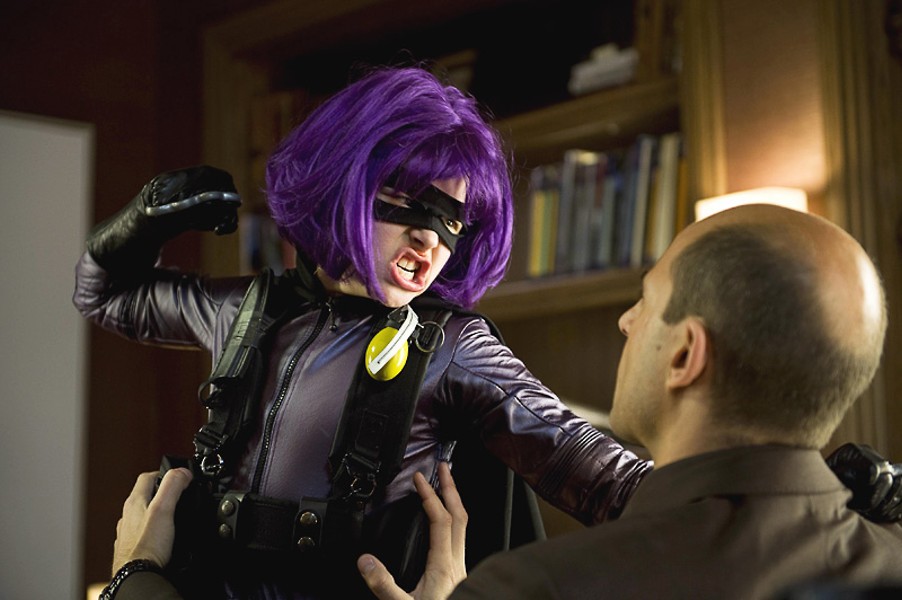 Kick-Ass, the Matthew Vaughn-directed adaptation of Mark Millar and John Romita Jr.'s graphic novel, sets itself up as an unadulterated exposé of the teenage mind. Tired of being mugged by high school thugs in a Manhattan that's notably scummier than the real thing, our hero Dave Lizewski (Aaron Johnson, a hot young thing given a nerd-over) wonders, in a hilariously put-on and intermittent Brit's New Yawk accent, "How come nobaddy's eva tried to become a suppahero?"

In a New York that is part past, part near-future and part Canadian soundstage, Dave soon learns the hard way that trying to intimidate thieves while wearing a ridiculous green wetsuit/superhero getup elicits first laughter and then a beat down. But as soon as he's back on his feet — this time with damaged nerve endings and steel bone reinforcements, thus minimizing his ability to feel pain — he's back on the streets, looking to fight more crime. His bumbling attempt to battle a four-man crew attracts a cell-phone cam-wielding crowd — which in turn scares off the bad guys. "Who are you?!?" asks an amateur videographer. Ready for his close-up, Dave sneers, "I'm Kick-Ass!" With that phrase and Dave's heroic antics catapulted into the memespace, Kick-Ass is real.

Vaughn approaches the teenage brain as not necessarily a function of age — adults and prepubescent girls are here equally afflicted with an identifiably adolescent lack of impulse control and concern for consequence. As Dave's double life takes shape, we're introduced to Mindy Macready (Chloë Moretz), a pigtailed blonde preteen whose daddy Damon (Nicolas Cage), a wild-eyed ex-cop-turned-ex-con, trains her to take a bullet and twirl knives for the inevitable day when "some junkie asshole pulls a Glock." The happy family sees the viral Kick-Ass video on the local news, and a lightbulb goes off: There's suddenly a socially acceptable context for their hyper-violent bonding exercises — and for Damon's jones for revenge against the Mafia don who set him up and sent him to prison. Soon, Damon/Big Daddy and Mindy/Hit-Girl, who, unlike Kick-Ass, are actually good at ass-kicking, are wasting drug dealers behind the scenes, while Kick-Ass gets all the media cred. Eventually, they'll have to join up to wage full-on, caped-crusader-on-gangster war.

In a rare twist for a long-in-the-works film that strives to be current, the characters' reliance on technology isn't contrived. In its first half, Kick-Ass offers a fairly astute, if light, assessment of how new media has given fresh outlets for the age-old instincts of both heroism and hero worship. In an accurate mirror of teen technocratic priorities, Dave seems to be in the crime-fighting game less to save lives and more for the MySpace glory. But no hero (or would-be franchise-kickstarter) gets off that easy, and thus Kick-Ass launches into its second hour, a mess of random source cues and progressively brutal action set pieces. As narrative and thematic clarity fall by the wayside, Kick-Ass devolves into a show reel for its own ancillary characters; expect to see a lot of slutty Hit-Girls toting mock bazookas this Halloween.

For all of its self-conscious edge, Kick-Ass feels as though Vaughn took all of his potentially powerful material and filtered it through distancing devices. It's a teen-angst movie filtered through the comic-book form, in which the characters themselves only respond to reality as filtered through comic books, TV and social networking. Most offensively, it takes the strain of Asian pop culture centered on uniformed schoolgirls coolly and competently kicking the asses of grown men, which has already been filtered into American pop culture by Quentin Tarantino, and reduces it to shallow shock lines. Are we really supposed to get excited about a little girl saying words like "cock" and "douche"? Anything passed through this many filters would come out weak. Never as shocking as it thinks it is, as funny as it should be or as engaged in cultural critique as it could be, Kick-Ass is half-assed. 