Not long after Mandy Estrella opened Mayo Ketchup, she got to talking to some customers who had first experienced her cooking at a long-passed catering event.

"It's been two years since we've had your food," they told her. "We've been waiting for you to open a restaurant."

No one understands that sentiment better than Estrella. For fifteen years, she's been working toward this moment, a journey that began in Orlando, Florida, where she was introduced to authentic Caribbean food thanks to her now-ex-husband. Estrella fell in love with the flavors of his Dominican Republic homeland, and, after they moved back to St. Louis, she was determined to recreate them for her family.

She didn't stop there. Once settled back in St. Louis, Estrella was struck by its lack of Caribbean restaurants, an odd void considering the area's sizable Caribbean population. Emboldened by her growing proficiency in authentic Dominican, Cuban and Puerto Rican cuisine, Estrella decided to take matters into her own hands.

If you'd have asked her when she started doing pop-ups and catering four years ago, Estrella would have admitted her desire to open a restaurant of her own. However, lacking the funding to take on such an endeavor, she decided to first build her brand, nicknaming herself "Plantain Girl" and building buzz for her cooking in the city's Caribbean community. If her blond locks and Midwestern upbringing raised eyebrows at first, her devotion to Caribbean culinary traditions and cooking prowess earned her the respect of the local community. It also earned her a significant following.

Catering events led to collaborations with restaurants and bars, like the Crafty Chameleon and Six Mile Bridge brewery. Eventually, she was approached by Derrick Langeneckert about running the food service for his Tower Grove South brewery Alpha Brewing Company, where she served up her Caribbean specialties under the name the Alphateria.

When that partnership abruptly ended in March of this year, Estrella knew that it was time to finally take the leap and open her own restaurant; she just needed to find the right space to do it. That all came together when she and her partner, Bradley Payne, came across the shuttered Laredo on the Square on the corner of Park and Mississippi avenues in the heart of Lafayette Square. Though not exactly turnkey, the space did not require expensive renovations, allowing Estrella to open it without breaking the bank. She and Payne revamped the old bar into a fast-casual order counter, put on a few fresh coats of paint and opened for business in late August. 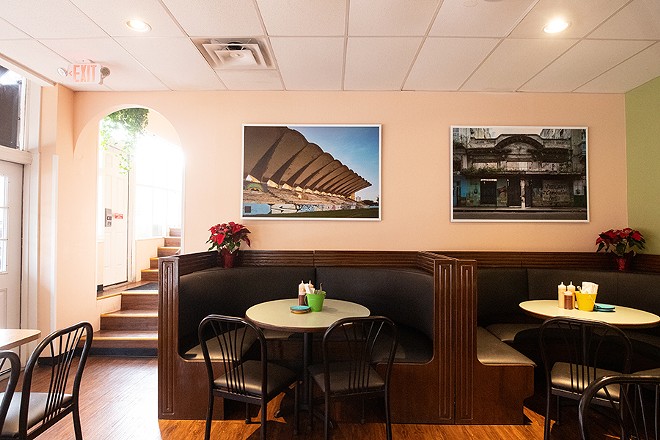 Named after the ubiquitous Puerto Rican condiment, Mayo Ketchup offers guests the Caribbean specialties they have come to love while giving Estrella the room to build upon her repertoire. It feels so right, as if she has been in the space forever; it's a vibe that results from a combination of loyal neighborhood support and a knowledgeable and efficient service staff that feels more like a family than a group of coworkers. 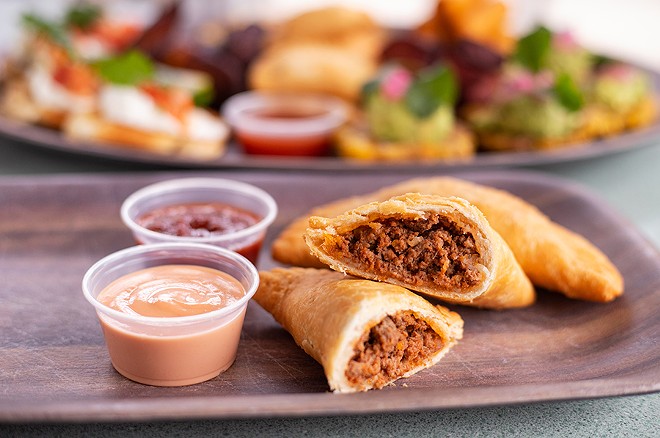 What ultimately makes the restaurant feel so soulful, however, is Estrella's cooking. You taste her passion for the Caribbean's vibrant culinary heritage in dishes like her beef empanadas, flaky, golden-brown pockets stuffed with juicy, seasoned ground beef. The smaller cheese versions are no less spectacular, full of molten, funky white cheese. Estrella serves these gooey fritters with a side of tart guava sauce that electrifies the otherwise rich dish.

For her Cuban bruschetta, Estrella covers toasted Cuban bread with mild goat cheese whipped to the consistency of crème fraiche. The bread is so porous that the cheese concoction soaks into its crevices, making this an appetizer that is far more satisfying than it appears. Tomatoes, onions and cilantro garnish the toasted bread, adding brightness to the decadent dish. 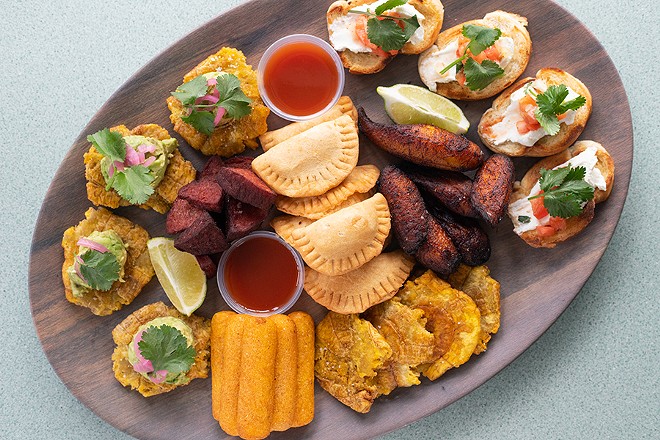 As a proper Caribbean restaurant, plantains make a frequent appearance throughout the menu. Buffalo-style tostones (twice-fried plantains), a fun riff on Buffalo wings, are soaked in a piquant hot sauce and served with ranch and celery sticks. The result is a wonderful Caribbean American bar-food hybrid. She also offers tostones con aquacate, topping individual plantain discs with smashed avocado and pickled onion. It's a thoughtful alternative to chips and guacamole. 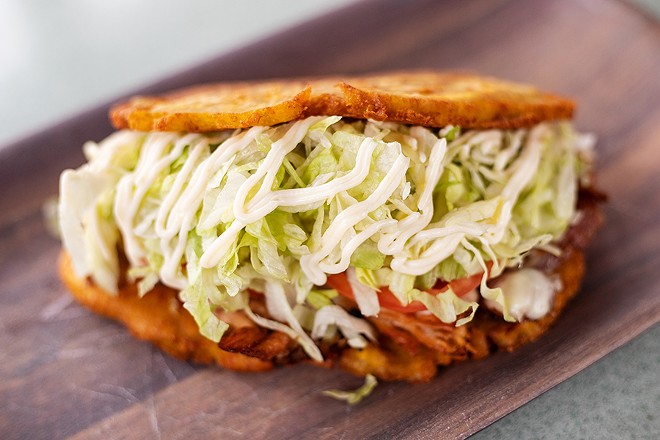 Plantains also serve as a base for one of Mayo Ketchup's signature sandwiches, the jibarito, though calling it a sandwich might mislead diners into thinking it's a handheld endeavor. It's not. Two huge rounds of smashed and fried green plantains are stuffed to the brim with succulent roasted pork (steak is an alternative option), lettuce and tomatoes. Swiss American cheese is melted over top and mixes with the accompanying garlic mayo for form a decadent concoction akin to a cheese sauce. It's difficult to eat without making a huge mess, but the flavors make the effort worthwhile.

Estrella's Cuban sandwich is the most respectable version I've found in town. Roasted pork and ham are pressed with Swiss American cheese, dill pickles and mustard between two slices of Cuban bread. The salt from the ham, pork jus and cheese might be overly decadent, but the mouth-puckering pickles and mustard cut through this to brighten the sandwich. Estrella absolutely nails this classic dish.

Mayo Ketchup's bowls evoke the sort of slow home cooking you'd expect from a Dominican grandmother. Pollo guisado features chicken braised with a whisper of citrus that's so tender it falls apart with barely a tug of a fork. The meat is served over red beans and white rice with a pickled onion, avocado and cilantro garnish. The highlight is the layer of seasoned braising jus that seeps to the bottom of the bowl, making the rice something akin to a Caribbean risotto.

For the pernil, Estrella serves slow-roasted pork shoulder over an aromatic arroz con grandule. The combination of rice, legumes and sofrito (a bell-pepper- and herb-based puree) is at once aromatic and earthy and serves as a warm canvas for the tender meat. 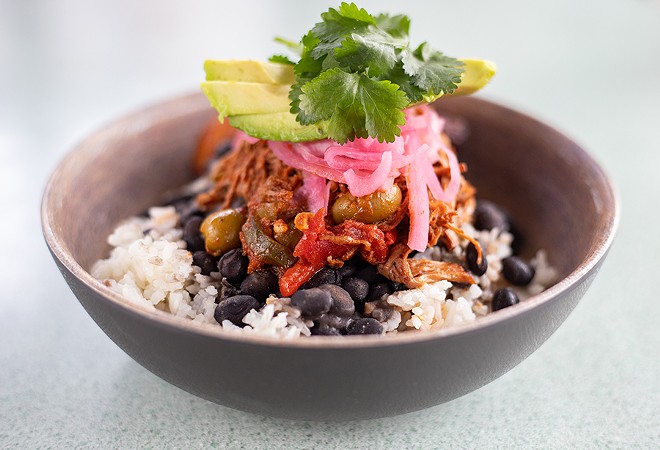 The ropa vieja is a bowl of pure, warm comfort. Like a Caribbean-style pot roast, tender flank steak is braised to the point that it falls apart, the meat and cooking juices served atop black beans and white rice. Like with the pollo guisado, the jus infuses the rice, giving it a rich, beefy flavor that is brightened with a garnish of pickled onions. As a cherry on top, Estrella serves the ropa vieja with maduros, or flash-fried sweet plantains, that offer the perfect amount of sweetness to end the meal.

Estrella has perfected her plantains over the past fifteen years. Sticky and slightly crisp from their natural, caramelized sugar on the outside, soft but not overly mushy inside, the maduros are the work of a seasoned hand who has more than earned her stripes in the business. Now that she can finally do what she does in a space all her own, the sky's the limit.