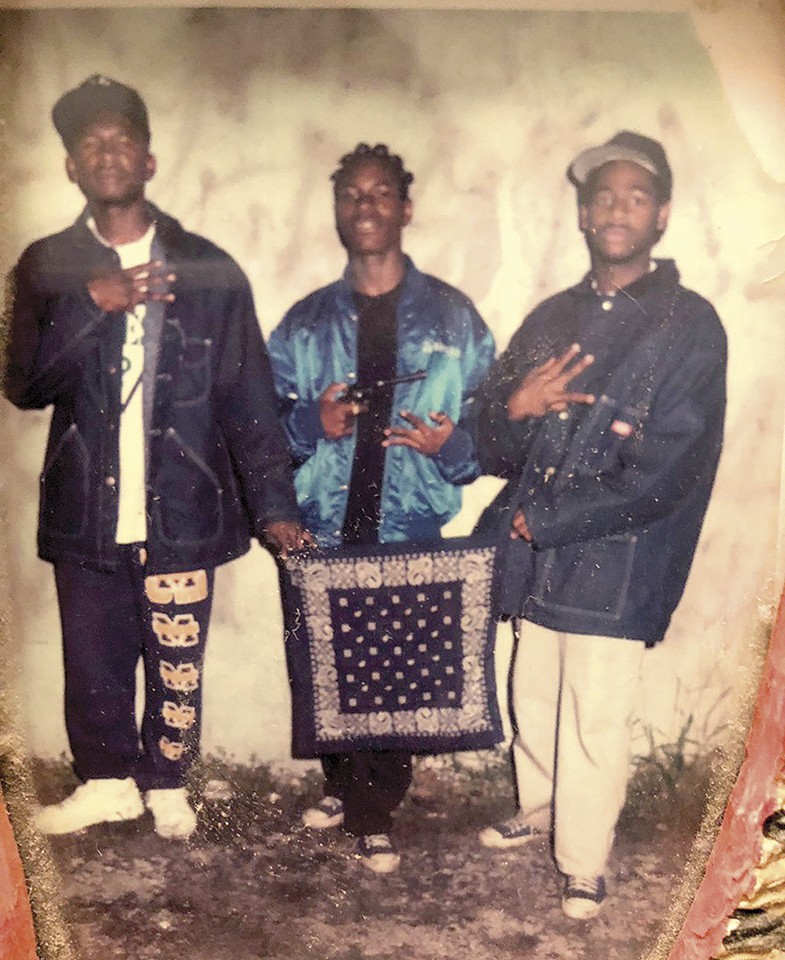 For all his talk of death, the real legacy of Real Talk lies in the kids who lived. And despite the chaos in their respective communities, some recent graduates insist Muhammad made all the difference.

Take Xavier Hill. He grew up in Wellston, a poor north-county suburb that encompasses stretches of crumbling houses that wouldn't look out of place in the aftermath of an airborne bombing campaign. Even in middle school, Hill says he was aware that the people around him were surviving any way they knew how.

"I paid attention to the street gangs. To see someone sell dope or to see a shooting, that was normal to me," says Hill, talking on the phone from a Navy base in Florida. "I saw that growing up all through my life."

When he was in sixth grade, his mother took him to an after-school Real Talk session. Hill didn't want to be there. He wanted to be playing basketball.

"All this stuff Sultan was talking about, I thought, 'This is a waste of time,'" he remembers. Not only that, but the burly ex-Crip wasn't letting him doze off. "He demanded I pay attention, he demanded respect back from me. I thought he was just extra."

But street life didn't remain a backdrop for long. By the time Hill entered University City High School, he realized that everything Muhammad had warned him about was actually happening.

It was the difference, he says, between watching basketball on TV and playing it yourself. He got into fights. A friend offered him weed. (Hill says he turned down the offer.) Starting in ninth grade, he began losing friends and classmates to gang violence.

But he resisted the call of the street life, even as his old friends went to jail.

"That could have been me," says Hill. Instead, he had what his friends apparently lacked: a part of him that was listening to those Real Talk meetings. "I knew that [Muhammad] tried this and this is where it led him. I wasn't quick to do it myself."

Death on the streets doesn't only claim gang members. In high school, one of Bri Bulley's friends started dating a boy in a gang. When rivals came to kill him, they shot his girlfriend too. Another friend was killed when he tried to buy a phone from a fifteen-year-old; the teen stabbed him to death.

"I hope people understand that, to these kids, there's way more to life than the gang language and drugs," Bulley says. "There are kids experiencing it, but there are kids who are coming from it and making something from their life."

To an observer of the after-school Real Talk sessions, the kids may look bored, slouching in their chairs as Muhammad lectures them about funerals and prison. But the words are finding their targets.

"Kids are like sponges, we soak up everything, even if we don't know it," Bulley notes.

Now a correctional officer at the St. Louis Workhouse, Bulley remembers listening as Muhammad warned about the possibility of running into bad cops. His words stuck with her.

These days, she's surrounded by inmates, some barely seventeen. She often wonders what would have happened had they attended Real Talk — maybe they could have avoided St. Louis' infamous medium security facility, awaiting court hearings for months on end.

Bulley says she tries to transmit the wisdom she gained from Muhammad. "Y'all don't have to come back here no more," she says she tells the inmates. "Y'all gotta do something, go to a job, go to school. There's way more to life than getting fast money out there, doing dumb stuff and coming here."

Some kids, though, aren't ready to hear that message until they're already behind bars. Brandon Walker and his sister Erianna Henderson had grown up in separate houses, she in University City, he in various spots throughout north county. They both were referred to Real Talk.

She was just starting high school, and he was in eighth grade. On the weekends, they'd get together with Muhammad at Saint Louis Bread Co. to talk and play chess. Henderson's grades improved, and soon she was attending after-school Real Talk sessions not out of obligation, but from a sense of belonging.

For a time, that was Walker's story, too. "When I met Sultan, he helped me change my life, he helped open my eyes to see something better," he says.

But it didn't stick. Today, Walker's voice sounds distant over the prison phone line. He's spent two years behind bars, the result of multiple convictions for gang-related felonies — burglary, theft and unlawful use of a weapon.

To Walker, those meetings with Muhammad at Bread Co. represented rare, treasured moments. Unlike virtually every other adult in his young life, Muhammad believed in him.

"He was like a father figure," Walker says. "I ain't never have anybody listen to me or listen to me how I feel. He said that I'm not like my friends, that I'm different, that he saw it in my eyes."

But outside of those meetings, Walker's immediate environment had only one source of stability, and that was the gang. They looked out for each other, and his gang brothers did what his family never could. They didn't just buy him shoes and clothes (although they did that); they showed him love.

Walker says he's been approved for release this December, and he wants to return to the Real Talk sessions — which his little sisters still attend — to talk about the "path of destruction" that led him to prison.

Compared to his former brothers in the gang, though, Walker still counts himself lucky. Four have died on the streets since his incarceration. He's alive, and he's only 22. If he can avoid the draw of the streets, he'll have the time he needs to make amends and, somehow, start again.

"As a young man, a teenager, we never know who's really there for us until the last minute," he reflects. He's too ashamed to reach out to Muhammad, but he thinks of those weekends with painful longing.

"I feel like I failed him, but I'll always be thankful to Sultan for being in my corner."