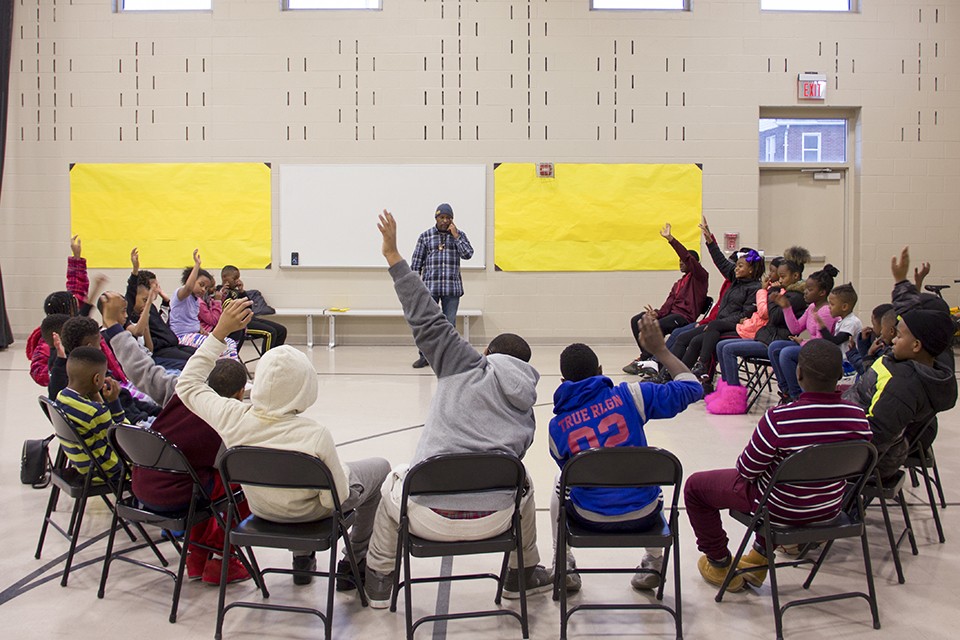 Each Wednesday night, the gymnasium at Pershing Elementary School echoes with the sound of about 30 pairs of feet, a half-dozen basketballs and the frenetic mixture of shrieks and laughter produced by students at play. Around 6 p.m., Muhammad starts the long process of calming them down.

"If I have to deal with you continuing to talk, guess what, that's no pizza — hey, put your cell phone up — remove the hoods — no basketballs — put away the chips. Put them away. Thank you."

Several minutes later, the students arrange themselves in three rows of semi-circles facing Muhammad. He wears a long-sleeved dark sweater crisscrossed with a pattern of white lines and small squares of blue, gold and white. Hanging from beads around his neck is a set of crystals lashed together with copper wire; the pendant looks very much like a heart.

Before he begins the day's session, he warns his audience once again to behave lest they lose pizza privileges. "I mean business," he says, sounding like a substitute math teacher before a lesson. "Mr. Muhammad got to keep it real."

Unlike Real Talk's in-school programs in the district — in those cases, students are formally referred by school staffers concerned about discipline or academic issues — the Wednesday night sessions are voluntary. These are elementary and middle school kids, some who've been getting into trouble at school, others who just need support and a watchful eye.

Muhammad welcomes the students once more, and points out that they'd have a guest helping out today — Shawn.

In 2015, Shawn was charged with three counts of first-degree assault. The charges stemmed from a messy fight that, while not gang-related, ended with Shawn firing a single shot at a fleeing vehicle. The bullet missed the car's occupants, but it still resulted in Shawn's arrest and a bevy of felony charges, as well as a $50,000 bond. After more than a year in county jail awaiting adjudication, he was ultimately sentenced to five years of probation and released.

"This is Lil' Shawn," Muhammad tells his suddenly curious audience. "He's going to be with us for a bit, he's doing some community service. I'm sure he don't mind me telling you this, he made some wrong moves in his life, and he's getting back on track."

Muhammad nods at Shawn and adds, "Welcome back."

After leading the kids in a recitation of the serenity prayer, Muhammad runs through a kind of stream-consciousness lesson plan. He tells the kids about a former student, one of the first Real Talk members. The kid had been bored by the meetings, Muhammad says, but he eventually graduated University City High School and enlisted in the military.

From there, Muhammad mind jumps to the next subject. (He doesn't plan each session note by note, he explains later. Whatever is rattling around his head on the drive to Pershing becomes the day's lesson.)

It's February 14, Valentine's Day, and the news is dominated by a school shooting in Florida that left seventeen dead. School violence is a frequent subject in Muhammad's talks, and the national tragedy carries familiar echoes for the former gang member.

"Unfortunately," he tells the Real Talk kids, "many of our schools in urban America got so much violence going on in them. We don't have enough counselors, educators and mentors who can relate to issues that you all deal with every day growing up in the hood. The stuff happening in the community basically spills over into the school, and not only does it jeopardize the individuals, but they jeopardize everybody else's life too. How do you feel about that?"

The response is the sound of several kids fidgeting in their seats. He tries again.

A dozen hands immediately go up. An uncle shot by accident. An uncle who killed somebody. An older brother who loved racing and wrapped his car around a tree. A best friend shot dead.

Muhammad has a name for this particular dynamic, that shared experience of death's impact — he calls it "the dead homie factor." When he talks to older students, he brings stacks of funeral programs of kids their age, and when he talks about those funerals, his voice carries more than rote sympathy. He's angry; angry that the eulogies are short, angry the remembrances lack substance, angry that a young person's life is distilled down to fluff, things like, "She had a loving and caring smile" or "He attended St. Louis public schools." Angry at legacies lost — and for what?

Three weeks later, on March 9, Muhammad  stands behind a podium in the same gym to deliver the keynote speech at a banquet celebrating Real Talk's tenth anniversary. Though the gym has been set end to end with tables, around a quarter of the seats stand empty.

Seven minutes into the speech, Muhammad pauses to mention a Real Talk graduate who wasn't able to make it to the banquet. In this case it's not prison or death; the graduate was diagnosed with cancer and confined to a hospital, and his condition isn't good. Muhammad asks the audience for a moment of silence for those who should be there but aren't. Heavy tears run down his cheeks.

After the banquet, when Muhammad checks his phone, he finds a text message waiting. The news is familiar: Earlier that week, two of his former gang members, fellow Crips in the late 1980s, had been shot and killed. He starts preparing a eulogy.

Muhammad is tired of death and funerals. But he's certainly used to them.