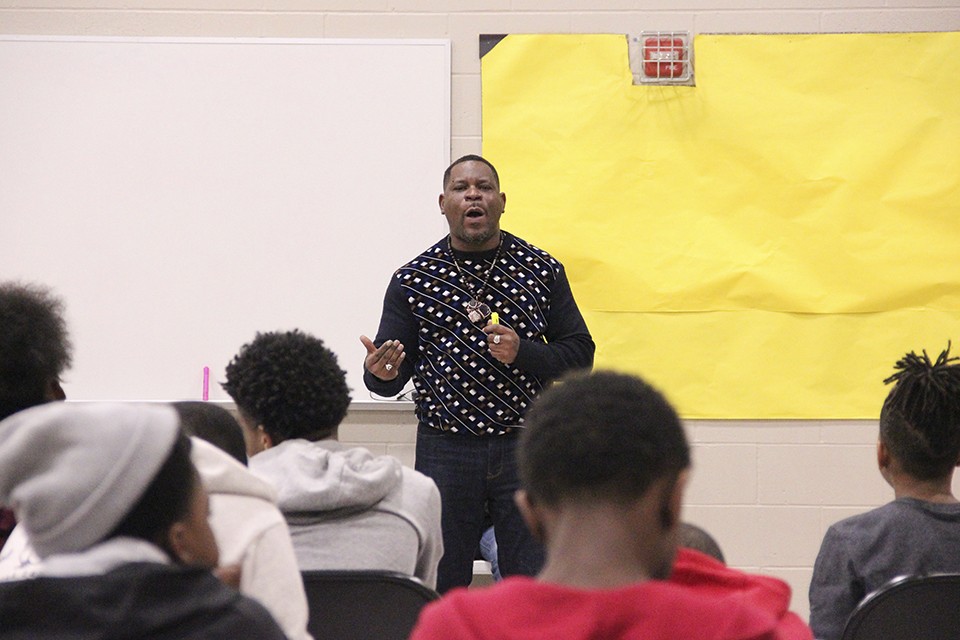 Since 2009, when Real Talk signed its first contract with the University City School District, hundreds of middle and high school students have faced the stern and patient expression that Sultan Muhammad wears when he's waiting for a room to settle down. In 2017, 129 students attended Real Talk programs across four different schools, and another 30 elementary-age students attended weekly after-school sessions.

On a Thursday afternoon in early February, Muhammad's deep voice cuts through the background din in Meshuggah, a coffeehouse on the bustling part of Delmar Boulevard — that's the segment with the bars, restaurants and music venues. Muhammad grew up in the other part, closer to Midtown — in other words, he says, "the hood."

He's now 42, and 25 years have passed since Muhammad's days with the Crip-affiliated 41 Delmar Mob. But he says the hood is as dangerous as it ever was.

As an eleven-year-old, Muhammad's joined his fellow Crips in staking out turf in the Vandeventer neighborhood by Turner Park. They called it "The 4," and it was bounded by Delmar to the south, Whittier Street to the west, Sarah Street to the east and West Belle to the north.

Today, just a few blocks south, the Central West End is a revitalized engine of economic activity, awash in private investment and tax incentives from the city. North city is still full of kids who are hustling.

As a teenage gangbanger, Muhammad's ran into some early gang-abatement programs, and he remembers being impressed by the professional-looking men in suits who would occasionally make the rounds on the streets. He'd go to a few of the classes they offered, but a month later he'd be back to robbing and shooting and smoking.

It was the same story when he became the mentor in the equation. After serving seven years in prison, Muhammad threw himself into getting an education, and by the early 2000s he co-founded a gang-prevention outreach group with a former cop.

At the time, he found himself running into a recurring problem. He was reaching gang members in their teens, but they were like him at their age — stubborn, suspicious and fully convinced they were invulnerable.

Muhammad recalls a request for assistance from a mom in his neighborhood.

"She wanted me to talk to her son and a few of his homeboys," he says. "They were all sixteen, fifteen. When I went to approach them, they looked at me and smiled, and I'm street savvy enough to read people. I knew that the likelihood of me making a breakthrough with them and helping them was real low."

When he went back to the mom, all he could say was, "They know what they doing." (In his retelling, Muhammad adds, "It wasn't three years later, and all of them young men that I'm talking about were in prison for murder, robbery and some other offenses.")

The breakthroughs, Muhammad realized, had to come sooner. The greatest hope lay not in reaching teenagers strapped with guns, but young kids in elementary school, long before they were faced with the opportunity to pick up their first revolver or sell their first gram. The University City School District agreed, and almost ten years ago, it signed its first $25,000 annual contract with Muhammad and Real Talk.

In its current form, Real Talk is more than a gang-prevention group; Muhammad touts it as a generalized "youth empowerment program" that can reach kids whose struggles aren't necessarily tied to gang violence.

And when it comes to Real Talk's impact on gang prevention, Muhammad doesn't portray himself as a savior. He's proud, but he doesn't boast. He talks of "a handful of success stories."

That's because it's difficult to define what such a "success story" should look like. Some of his students in University City benefit from a stable home life that looks nothing like his own childhood. Students are referred to Real Talk for a range of issues, from academic struggles to repeated disciplinary infractions and suspensions.

And some former Real Talk participants go on to join gangs and go to jail, like Shawn. In these cases, the success comes when they resist the temptation to go back — just like he himself did.

The life is tempting, and, yes, it can be fun. It's like Muhammad says — gangs are a one-stop shop, a shortcut, a wish-fulfillment device for people short on support, love or loyalty. The trick, then, isn't always stopping the inevitable once it's already in motion. It's revealing a way out and the tools to reach it. It's letting kids know that they may make the wrong choices, but they can still find their way back.