Your first clue that Sultan is something special comes courtesy of its dolmas. It's not that their presence is novel; you can find rice-stuffed grape leaves at just about any Mediterranean restaurant. Usually, though, they are basic and often even from a can, plopped next to some shawarma as an afterthought.

To liken Sultan's dolmas to such a mass-produced product, however, would be like comparing A5 Wagyu beef to a sirloin from Ponderosa. Here, the grape leaves serve as a delicate wrapper for flawlessly cooked rice, fresh herbs and lentils that are bound together with just a touch of spice-perfumed tomato sauce. Grape leaves are the most common wrapper, but the heaping platter also includes halved red and white onions, eggplant and zucchini, all stuffed with the same delectable filling. You could find a mix like this simmering all day on the stove at a home in Iraqi Kurdistan — and if the taste doesn't clue you into the fact that Mom is in the kitchen making these from scratch, the fact that she fills the plate with a portion that could feed an army will make that abundantly clear. 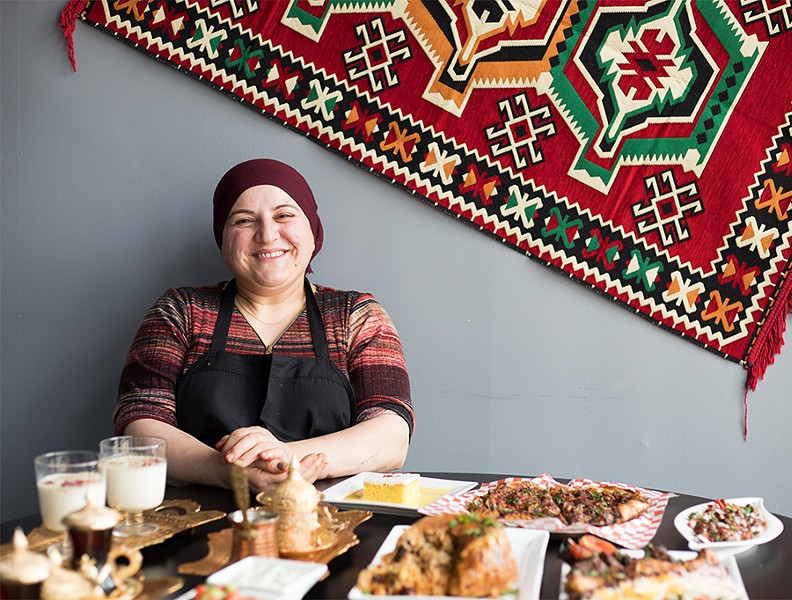 The matriarch responsible for Sultan's exceptional dolmas is Jenar Mohammed, who owns the three-month-old restaurant with her husband, Akram Saeed. A talented home cook, Mohammed dazzled her family with her interpretations of traditional Kurdish recipes well before they fled Iraq in the 1980s. Saeed had become a target of Saddam Hussein's brutal regime after working for the U.S. Army. Fearing for their safety, the family was granted refugee status and landed in St. Louis.

In their adopted city, Saeed worked as a valet, taxi driver and local truck driver while Mohammed stayed at home with the family. There, she perfected her recipes and expanded her repertoire by teaching herself other Middle Eastern cuisines (Turkish, Syrian, Palestinian).

She still wanted more, so Mohammed got a job as a prep cook as Sameem Afghan Restaurant. It was a nice enough gig, but it was no substitute for Mohammed and Saeed's dream of opening their own restaurant. Still, it opened the pair's eyes to the bustling Grove neighborhood and got them exploring available locations to go out on their own. When they came across the former Erney's 32 Degrees at the corner of Manchester and Boyle, they knew they had found their spot.

The Mohammed-Saeed family spent roughly a year doing a gut rehab of the space, turning the former nightclub into two inviting dining rooms. Middle Eastern tapestries hang from the grey-painted walls, and colorful chandeliers with stained-glass globes dangle from the ceilings. A pastry case (on my visits filled with just a handful of orders of rice pudding) takes up half of the back wall in the main dining room. Shelves filled with gorgeous, gilded Turkish coffee serving vessels sit alongside it. (There is no alcohol.)

Sultan has ample seating — roughly 25 tables — but the restaurant is already popular enough to ensure those are full during most dinner services. The dolmas are just one of many reasons for the packed house. Baba ganoush, another ubiquitous Middle Eastern specialty, is a step above other versions. Here, the eggplant dip is chunkier and loaded with tahini, which provides a deep, earthy undertone. Sesame seeds and za'atar add additional complexity; the za'atar especially pairs beautifully with the char-blistered naan that is provided for dipping.

Even the hummus plate and falafel are special, elevating the humble chickpea to a thing of beauty. The former is velvety, spiked with rich tahini and brightened with a flourish of sumac; the latter equally impresses with its crisp, brown exterior and an almost fluffy, couscous-like texture. Again, these are not simply rehashes of common dishes; Mohammed prepares them as if it's the first time anyone has done so. 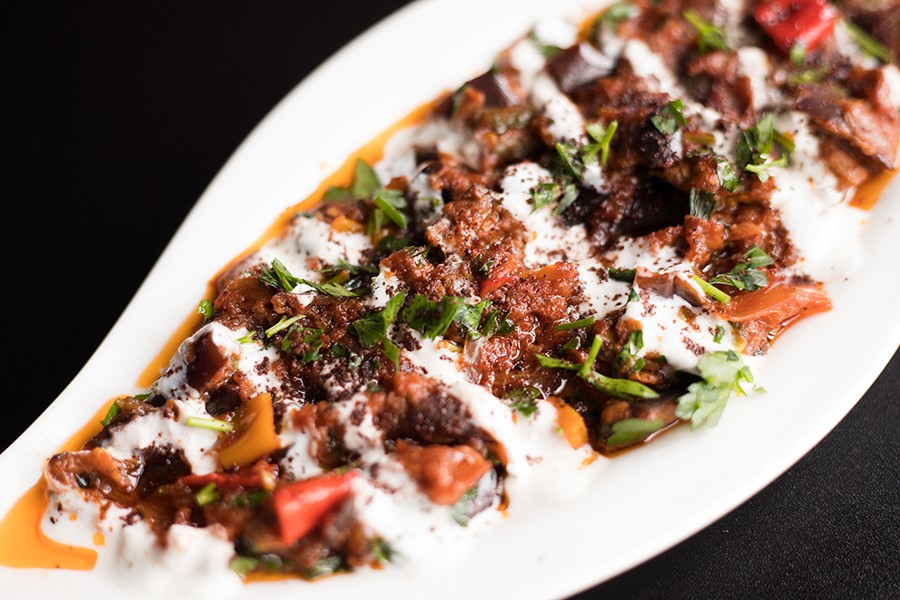 Her talent for eggplant dishes is not limited to the baba ganoush. Saksuka, a mash of grilled eggplant and tomatoes that's generously slicked with olive oil and spiked with garlic, is positively luxurious. Turkish-style fattoush pairs grilled eggplant with roasted red peppers; the concoction is layered onto deep-fried pita bread, then dressed with cool cucumber yogurt sauce, parsley and tart pomegranate arils. It's a symphony of textures and flavors that is both richly savory and refreshing at the same time.

For main courses, Sultan offers several kabobs, served with basmati rice, a grilled tomato and tomato-cucumber salad. The chicken version is mildly seasoned, yet surprisingly dazzling thanks to a succulent texture rarely found in white meat. But the beef kabob steals the show. The ground, herb-flecked meat is so tender you could butter your bread with it. A layer of char around the exterior deepens its flavor. Both show that something as simple as grilled meat can be extraordinary when executed flawlessly.

Lahmageen is billed as a "Mediterranean-style pizza," a description that hardly conveys its complexity. Grilled naan serves as the base for a mélange of minced beef, onions and herbs; the texture evokes rustic tomato sauce, but the flavor is more difficult to wrap your head around — pleasantly gamey, tart, almost cinnamon-spiked. A different flavor reveals itself with every bite. 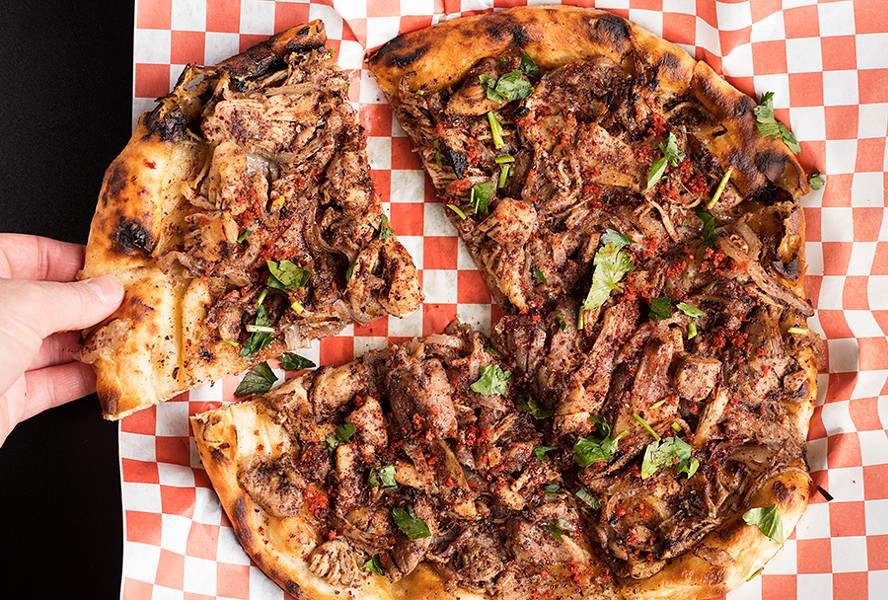 Musakhan is similar in format to the Lahmageen — meat served atop a pizza-shaped flatbread — but it is even more impressive. Pulled chicken that has been roasted with onions, sumac, allspice and saffron is shockingly bright and juicy. The meat is piled atop char-blistered naan, making it like a cross between the most wonderful shawarma you've ever had and a Neapolitan pizza. It's just meat and bread, but Mohammed is able to elevate them to the level of masterpiece. 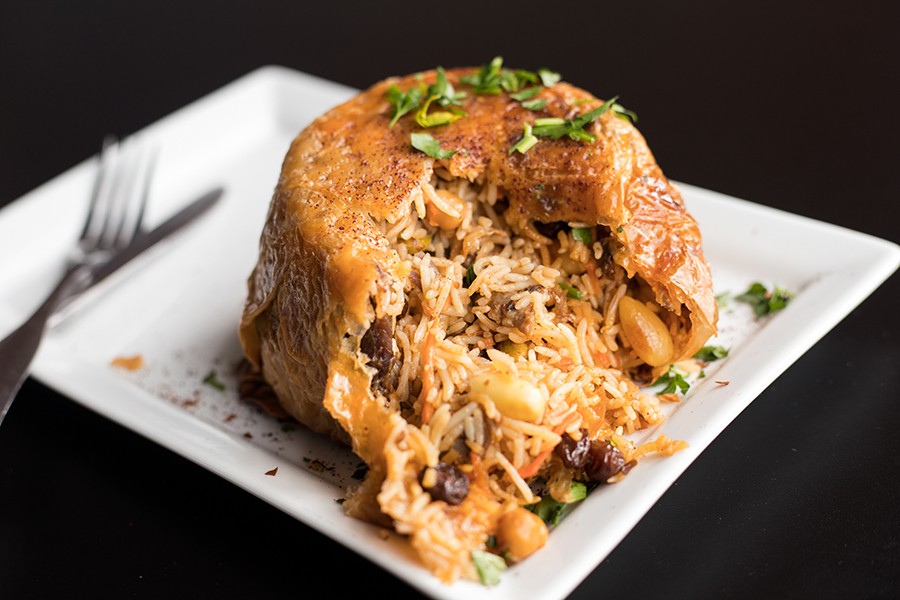 Still, nothing prepares you for her Sultan pilau, a dish that is as impressive to the eyes as the palate. Mohammed calls the exterior of the dish a "phyllo pocket," but it's actually phyllo shell fashioned into a mound the size and shape of a fez. The phyllo layers crisp up to a golden brown and stand about six inches high. You don't cut — you crack into the shell. When it's breached, an intoxicating steam pours out, teasing what awaits inside: rice and mild pulled lamb, accented with almonds, pistachios, walnuts and raisins. It gives you the pleasure of crunch, the satisfaction of savory, the pop of sweetness from dried fruit — it's like a lamb biryani given museum-pedestal treatment.

And therein lies Mohammed's talent. Over and over, she adheres to traditional notions of Middle Eastern cuisine while elevating them with her flawless execution and eye for thoughtful additions. Her efforts make you feel as if you are eating these tried-and-true dishes for the first time, a talent that marries the skill of a chef with the nourishing comfort of a mother's home-cooking. That she can operate in this sweet spot makes Sultan a terrific addition to the city's dining scene — one we didn't even know we'd been missing.