The rules of the dogfight are simple. Each Marine chips in $50 and brings the ugliest girl he can find to the party — winner gets the pot, and maybe the losers get lucky. It's less bloody than the dogfighting done with actual dogs, but no less damaging to the combatants.

It's an unusual set-up for a musical, but Dogfight is an unusual musical. Originally a 1991 film starring Lili Taylor and River Phoenix, it was adapted for the stage by Benj Pasek and Justin Paul (music and lyrics) with Peter Duchan (book). Stray Dog Theatre's production, under the direction of Justin Been, focuses on the opposing worldviews of its leads — one a warmonger, the other a pacifist — rather than the propriety of its distasteful central game, which is a good choice. Been's Dogfight is a story about people on the precipice of a major social shift, rather than one of misogyny run rampant.

Eddie Birdlace (Brendan Ochs) is an eighteen-year-old Marine who has one last night in San Francisco before shipping off to Vietnam. It's November 21, 1963 — the night before President Kennedy will be killed — and Eddie is eager to win the dogfight planned with his friends Boland (Luke Steingruby) and Bernstein (Kevin O'Brien) before they settle that little conflict in southeast Asia. The boys anticipate a quick victory and a hero's welcome when they return — but first they have to humiliate some women.

Of course, none of them think of the dogfight that way. So when Eddie finds Rose (Shannon Cothran), a shy young waitress playing her guitar near the end of her shift, he says all the right things through his remorseless lady-killer's smile to persuade her to come to the party. 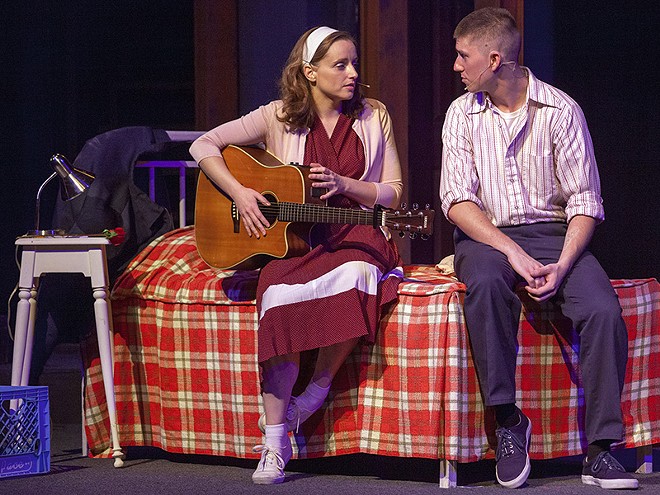 They make a strange pair. Eddie looks for any reason to fight, so jacked up on Marine training and his own confidence that he explains to Rose, "If you want to change the world, start shooting." Rose is a folkie, a pacifist and a songwriter who lacks the self-esteem to perform in front of other people.

Eddie is the protagonist (and certainly the antagonist in the early going), but Rose is Dogfight's soul. After she discovers the rules of the game, she directs her anger only at herself in the song "Pretty Funny." Cothran acts the hell out of it, her face wounded and her eyes hollow as she tries to find the upside of the night — at least she finally had her first date — and then scolds herself for being positive about anything. It is the highlight of the show, and also the turning point; Eddie returns, suffering the pangs of a conscience he doesn't understand, and the two come to an uneasy agreement to go to dinner.

The second act follows the pair as they try to figure out why they agreed to resume their date. There is something otherworldly about it all. Ochs plays Eddie as a cocked fist waiting to strike, and yet despite that he has moments of kindness. Is Rose desperately lonely for attention, or does she see a good man somewhere inside the boy who humiliated her?

The dreamlike quality of Act Two is enhanced by the ensemble, who cycle through multiple roles as the couple passes through the nighttime city. (Jason Meyers deserves special notice for his work as a snooty waiter, a gruff tattoo artist and a smarmy lounge singer.) Rob Lippert's set also lends a fairy-tale quality as it evokes a bygone San Francisco. A balcony with streetlights looms high over the stage, with the silhouette of a distant bridge and the city's skyline in the background. Underneath are a large pair of mirrored doorways. The ladies often check their hair and makeup in these, but Eddie never once looks — self-reflection is not his strong suit.

But it's not really America's, either. At times the audience is dimly visible in those mirrors, but never recognizably so. In 1963, as the country slides deeper into war and a president is killed, there isn't time for introspection. The results are calamitous.

It is a lesson we never remember. Young men are trained to kill, women are there for the taking and the world races ever onward to some uncertain destiny. And yet two people can find one another in that chaos, and come to understand each other, if only they care enough to look deeply into themselves.