Hedwig and the Angry Inch

Text by John Cameron Mitchell. Music and Lyrics by Stephen Trask. Directed by Justin Been

Sometimes you meet up with friends at a bar, see a band lay it out raw and nasty on the stage, and then argue in the street about the merits of the show. Rarely does the evening run that course when you see a play — but Stray Dog Theatre's new production of John Cameron Mitchell and Stephen Trask's Hedwig and the Angry Inch isn't like most plays.

For starters, director Justin Been has transformed the Tower Grove Abbey into a bar with pews. Scenic designer Rob Lippert has recreated the grubby '90s clubs of my late youth with a remarkable eye for detail. The stage is black, the bar at the foot of the stage is black, and a slew of mostly functional TVs are nestled in the metal pipe scaffold that climbs the back wall of the performance space. Crew members in black T-shirts and backstage laminates on lanyards run towels to the bar, which really does serve drinks. It's staffed by two punk-rock hotties who are fashionably bored. All that's missing is the stench of stale beer and last night's puke.

We're all here to see Hedwig (Michael Baird), the international mystery woman who's been implicated in rock star Tommy Gnosis' recent car crash. She's an eight-foot-tall glamzilla in stacked heels, a tight pink dress and a blonde cumulonimbus cloud of a wig, and she explodes on stage with a blistering rendition of her song, "Tear Me Down." One of the bartenders idly fiddles with her choker as the band tears it up behind her — it is a display of near-fatal levels of cool. 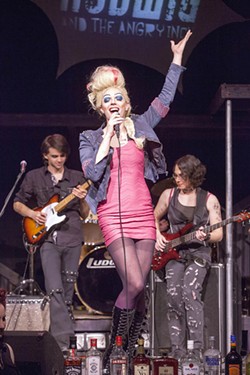 Between songs Hedwig tells us her life story, beginning with her boyhood in East Germany through her botched sex-change surgery and up to her ordeal being marooned in a Kansas trailer park. Left with only an inch-long scar where her penis used to be and where her vagina ought to be, Hedwig is neither wholly male nor female, by her own estimation. Her unique condition between genders fuels her songwriting, which is by turns incisive, cruel and beautiful. "The Origin of Love," easily one of the greatest songs in the annals of the human experience, is delivered by Baird with such delicacy and conviction that a hush falls over the crowd when it ends — it's as if we're all hanging between the sky and the ground, freed from gravity's demands for as long as the song lasts, and then a little bit longer.

What follows in this production, unfortunately, is a protracted, momentum-sucking lull. Hedwig fills it with some vamping, a little audience participation and more back story, only the last of which is really necessary. Baird does his best to keep the energy level high, but the play becomes nothing more than a drag show for this stretch. Business at the bar definitely picked up at this point, but once Hedwig fires up another song the show gets back on track and races toward its big finish.

Baird's commitment to the role is total, bringing Hedwig to thrashing, wriggling life. He delivers the double entendres with acid tang, he sings well and, as one of my companions noted, "He really is a beautiful boy."

So what were we arguing about after the show? Both of my companions are Hedwig devotees who felt the ending was truncated compared to the film and the original staging. There were also grumbles about the band drowning out some lyrics. Perhaps if you're a purist, you'll have the same misgivings.

But this cult hit, at its core, is about rejecting anyone else's idea of who you should be, about declaring "this is who I am, and what I am." And regardless of any quibbles about staging, that is fully evident in this production.

Beyond that, I don't go to the theater to see a museum piece or a music-box rendition of a show. I go to feel something, to experience a piece of art come to life, warts and all. This production has some warts, but the "all" here is also all-consuming.

In "Midnight Radio," Hedwig sings a lyric that references Lou Reed's platonic ideal: "And all the strange rock and rollers/You know you're doing all right." "All right" is that moment when you're emotionally spent, your makeup is smeared, your heart is broken and you're well and truly fucked-up — yet when your song comes on the radio, that other shit fades away. This version of Hedwig is extremely "all right" in all the right ways.0x006E