Written by Pete Townshend and Des McAnuff. Directed by Justin Been. Presented by Stray Dog Theatre through October 26 at the Tower Grove Abbey (2336 Tennessee Avenue; www.straydogtheatre.org). Tickets are $25 to $30.

Director Justin Been is well aware of the pitfalls in attempting to return to the past. In his program notes for Stray Dog Theatre's current production of The Who's Tommy, Been writes that he would "prefer not to return to shows he's done before," referring to the 2011 edition of the show he directed for Stray Dog. But Pete Townshend's rock opera set up shop in his head, and he had to get it out.

The urge to compare the earlier production (a steampunk-tinged, sepia-toned look at post-war England that was warm and highly emotional) to this new version is understandable but unfair. All we have now is this Tommy, which is a more intellectual, high-tech and sleek staging of the show. If Been's creative vision is sharper and more thought out, it's no less powerful a musical under his direction. The story of a boy who retreats into his own mind for years, and who eventually emerges as a young man who sees every living person as a miracle, flaws and all, is here cut loose from 1950s England and made more universal. Let them among us who has not emotionally retreated from the current world in a time of stress play the first game of pinball.

Scenic designer Josh Smith helps contemporize the show with his stark white set of columns and walls; set dead center in the stage is the orchestra, who play a large role in the show. Costume designer Eileen Engel dresses the cast in contemporary black outfits piped with neon colors and details, further modernizing the setting.

Kevin Corpuz is the fully grown Tommy, who appears on an elevated platform before the show even starts. This is his memory of what happens, and as the ensemble arrays itself on stage below, he fades into the darkness. The first fifteen minutes of the show blur by, an unbroken procession of vignettes that show the wedding of Captain and Mrs. Walker (Phil Leveling and Kelly Howe) an air raid and the presumed death of Capt. Walker in war-torn Europe. Been designed the projections, which include footage of paratroopers, a timeline projected on the lip of an overhang and falling snow. This is all aided by audio engineer Jane Wilson's inspired sound design, which is best described as a cinematic soundtrack.

Corpuz haunts the set, moving through his memories and observing as his younger self (played by Alora Marguerite Walsby at age four and Leo Taghert at age ten) witnesses the violent return of his father, an event that traumatizes Tommy into deafness, muteness and blindness. In one stunning scene, Been zooms in on Tommy's internal world as his mother tries to engage with him; muffled voices and washes of static fill the theater. 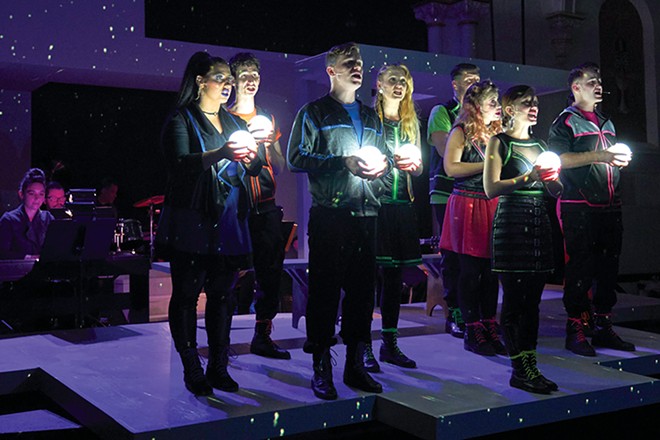 The ambitious technological element of the show is not without its problems. Music director Jennifer Buchheit and her band do excellent work, but one of the two guitarists seemed to suffer equipment trouble in the first act, and his playing wasn't always heard. In a guitar-driven show such as Tommy, the loss was evident.

Several vocalists sounded like they were straining their voices, or perhaps the strength of their voices strained the headset microphones (Molly Marie Meyer's searing turn as the Acid Queen rattled my brain; I suspect she's never needed a microphone in her life). Whatever the reason, there were several instances of distorted high notes. Still, that's rock & roll (and live theater) for you.

And then there was Kevin Corpuz and Leo Taghert's joint performance of Tommy. They pass the role between each other, Taghert becoming the ghost in Corpuz's memory. The younger Tommy watches Corpuz's jubilant performance of "I'm Free," as if part of Tommy is still hidden.

The finale of the Been's second Tommy is essentially unchanged from the first. The ensemble sings "Listening to you, I hear the music/Gazing at you, I get the heat," as they arrange themselves in the shape of an arrow, Tommy at the point, directed right at the audience. As one, they cease performing and instead sing to the audience directly, completing the circuit. It remains one of the singularly joyous endings in theater, this energy exchange between crowd and cast. No longer are we locked deaf and dumb in our seats — we're free to join the show.