JOHN LAMB Mary Dale and Pat Pilford (Will Bonfiglio, Shannon Nara) have had it up to here with Method acting.

There is a foreign element stalking America. It undermines the social order, drives wedges between husbands and wives and stops beloved comedienne Pat Pilford from being elected president of the Screen Actors Guild. Friends, I'm talking about Method acting.

Welcome to the wild world of Charles Busch's comedy Red Scare on Sunset, which riffs on McCarthy-era America, old Hollywood, gender roles, celebrity gossip and the soft-focus biographical feature. Stray Dog Theatre's current production of the show is a high-tech/low-brow marvel that thrives on both the strength of its performances and the growing sense that what Busch and director Gary F. Bell are really skewering isn't 1950s America. There's also a tasteful nude scene involving a Lady Godiva fantasy sequence. It's a delightfully weird show; you should see it for yourself.

We open on a broadcast of the Pat Pilford radio show, which is derailed when Pilford (Shannon Nara) fires her co-star on-air because he's a communist sympathizer. Nara plays Pat as a fire-breathing version of Lucille Ball — only louder, blonder and much crasser.

Pat's best friend is Hollywood good girl Mary Dale (Will Bonfiglio, in drag), who is so downright wholesome that her initial entrance is accompanied by soft lights and swelling strings. Mary is apolitical, and gently chides her friend for firing a man based on suspicion, as well as for gossiping about other celebrities' personal lives. (Pat is unswayed. "We have a right to know who's boffing who," she sneers.) 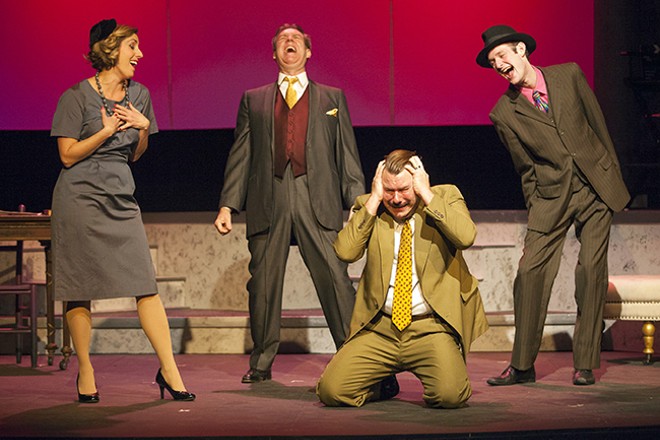 Bonfiglio cuts a willowy silhouette even in Mary's billowy mid-calf skirt, which is always paired with gloves, hat and pearls. (Costume designer Amy Hopkins appears to have raided Doris Day's closet.) He's good in heels and even better at portraying the breezy laugh that always seems to be on Mary's lips. She loves acting, her new beach home and her husband Frank (Stephen Peirick), a brooding theater actor whose film career is bottoming out. Peirick and Bonfiglio have great chemistry, and you have to respect the former's strength; dipping a tall man in heels and then swooping in for a kiss should be an Olympic event.

Frank senses a career rebirth when actress Marta Towers (Ariel Roukaerts) claims she could get him into Yetta Felson's Method acting class. "We could do No Exit," she purrs seductively, which causes Frank to lick her hand in excitement. He takes the plunge, and soon learns to his dismay that the Method views movie stars as the enemy — its dream is a world without a star system, color film, age-defying camera filters or top billing. Its practitioners are all communists, and they blackmail Frank to get rid of Mary to further the cause and help destroy America.

Director Bell keeps the action moving along briskly, which is a necessity in a play that has attempted murders, failed seductions, a brief extract of Mary's new musical biopic Godiva Was a Lady and much skullduggery. The smallish cast doubles and triples up on parts to fill out the constellation of stars in Hollywood (Stephen Henley in particular impresses while disappearing into several roles), while a large screen above the wide Tower Grove Abbey stage provides scene titles, rising moons and that aforementioned fantasy sequence starring a coquettish Bonfiglio. There's also a layer of special effect sounds that underline double-takes, hunches and shocking discoveries (no sound designer is credited).

When the dust settles, Mary has been swayed to Pat's red-white-and-blue-or-death worldview. She bravely lists the names of people she knows who may be communist sympathizers and/or Method actors — it's a whiplash-inducing scene. In the historical past, she's betraying her friends and co-workers. In the context of the play, she's heroic. In the real world, which is quite close at hand in the closing minutes of the play, there is a sense of anticipation. We have our own national obsession with Mother Russia and possible collusion — should we be rooting for her to name one name above all others, or are all witch hunts equally wrong? It's a strangely serious finale for a play that gives so many laughs along the way.