Midway through Stray Dog Theatre's current production of Steel Magnolias I decided Robert Harling's play felt quite a bit like a double-size episode of Designing Women. That's not a criticism; I have happily watched entire seasons of the smartly written sitcom. And beyond the superficial similarities — both feature Southern women gathering to gossip and support each other through tough times — it's more a feeling that an evening with these characters, so immediately familiar and comfortable, is time well-spent.

That's thanks to director Gary F. Bell and his strong cast of six, who collectively keep the mother/daughter relationship of M'Lynn and Shelby Eatenton (Jenni Ryan and Eileen Engel) front and center. That relationship is tested in ways small and large, but never found wanting. Bell's eye for character and detail, and the fine work of Ryan and Engel, result in a show that progresses with delicacy toward an astonishing finale, even if you already know how it all ends.

When the play opens, M'Lynn and Shelby are preparing for the latter's wedding day with a last-minute trip to Truvy's beauty parlor, the social center of Chinquapin, Louisiana. The regulars filter in, all close friends of many years and all excited about the impending wedding. Truvy (Sarah Gene Dowling) is brassy, Clairee (Liz Mischel) is the football-mad widow of the former mayor and tart-tongued Ouiser (Andra Harkins) is the wealthiest and most curmudgeonly person in town. Only Truvy's new assistant Annelle (Alison Linderer) is an outsider, a quiet young woman who's hiding some secrets. 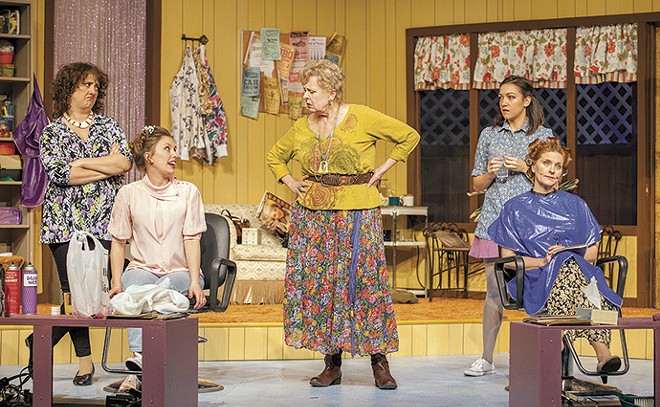 While Truvy works on Shelby's hair (a Princess Grace up-do wreathed by baby's breath, over M'Lynn's objections), Shelby discusses her dream of growing old with her husband and having lots of grandkids. M'Lynn stares into the distance at this point, unexpectedly troubled by Shelby's imagined future. We learn that Shelby is severely diabetic, and her doctor has warned her that giving birth will be very dangerous — but what Shelby wants, Shelby gets.

Throughout the two years covered in the play, the women get a little older, a little wiser and much closer. Truvy comes to view Annelle as the daughter she never had, Clairee and Ouiser find new and ever more hilarious ways to antagonize each other, and Shelby has her baby, bringing more worry for M'Lynn. Jenni Ryan gradually compresses M'Lynn to a guarded smile and cautious speech as she attempts to function in a world in which her beloved, aggravating daughter blithely flaunts all common sense. When Shelby's kidneys fail she treats the whole ordeal as a minor inconvenience, while M'Lynn becomes practically a shadow from worry.

But M'Lynn also has a mother's strength. In a last-ditch attempt to save Shelby, she risks her own life. It's here that Bell, Engel and Ryan bring Robert Harling's memorial to his sister Susan — the inspiration for Shelby and the entire play — to life once again. M'Lynn and Shelby, surrounded by their closest friends, marvel at one another in a long, quiet moment. The profound love that Engel and Ryan project is both humbling and empowering.