Words and music by Marc Blitzstein. Based on the play and film The Little Foxes by Lillian Hellman. Directed by James Robinson. 0x000APresented through June 24 by Opera Theatre St. Louis at the Loretto-Hilton Center (130 Edgar Road, Webster Groves; 314-961-0644). Tickets $25 to $129.

Henrik Ibsen's drama Hedda Gabler is more than three hours long, but it never feels like it. Stray Dog Theatre's astonishing new production of the classic is a marvel of economy, squeezing the decay of a new marriage and the destruction of a bold woman into that short amount of time. It's a fascinating and enthralling journey from beginning to end, and that's due in no small part to the outstanding work of director Gary F. Bell's cast, who are Ibsen veterans all at this point.

The five principals all starred in last year's A Doll's House, which was also at Stray Dog, but in Hedda Gabler they surpass the lofty heights they collectively achieved then. There are no wasted moments, and no lazy gestures nor creative missteps. This production is profoundly alive in every sense of the word.

Nicole Angeli's Hedda is the daughter of a famous general, and appearances matter to her. She married Jørgen (Ben Ritchie), a historian of the handcrafts of medieval Brabant, because she had no better offers. After a six-month honeymoon tour of Europe, she's tired of his tedious conversation and lack of imagination. She has no female friends (blame her infamous haughtiness and overt cruelty), and society's expectation that she be solely a housewife bores her to no end. Jørgen even expressly forbids her to play with her father's dueling pistols, which leaves her no outlet for her rage.

Ritchie has disappeared into Jørgen, a middle-class twit who is oblivious to social cues. He speaks through his twitching nose and covers his frequent chortles with a dainty fist. When he discovers that his old academic rival Ejlert (Stephen Peirick) has gotten control of his alcoholism and published a history of Western civilization that everybody in Christiana is talking about, Jørgen fears his easy track to a university professorship will be obstructed. Hedda, however, briefly brightens, exclaiming that the rivals' competition for the job will "be like a duel!" — and that she can stage-manage her husband into crushing the other man. 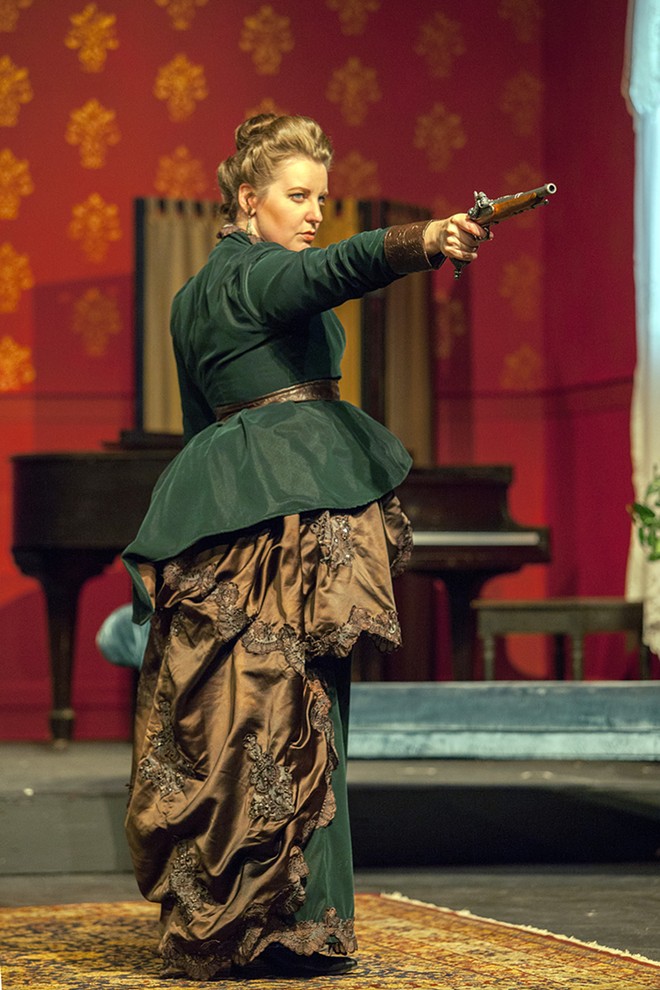 Yet Ejlert and Jørgen disabuse Hedda of even that little joy, leaving her with only Judge Brack's visits for pleasure. Brack (John Reidy) is a brilliant conversational foil for Hedda, but the undertow of cruelty in him grows with each visit. "You've never been stimulated by anything," Brack observes, both subtly implying that he could rectify that and making a threat in the process. "I'm glad I'm not in your power," Hedda tells him late in their verbal games. That will change, however.

All of these relationships are fraught with old rivalries and affairs, which Ibsen reveals through wryly comic dialogue. The cast ably twists the words to show who's still fighting and who's forgiven. (Jørgen is an exception, his sole past relationship being with his beloved old house slippers. They are happily reunited.) Thea (Rachel Hanks), Ejlert's authorial collaborator and typist, is the only one who refuses to duel this way. She says what she thinks and pulls no punches. "You tried to set my hair on fire in school," she accuses Hedda shortly after arriving. "Nonsense, we were very close," Hedda counters.

All these quiet battles come to a head on the night of Jørgen's belated stag party, and the whirlwind final act sees all the plots and schemes undone. Hedda, all her cruel fantasies destroyed by the fact that she can't really manipulate anyone outside her own house, bundles up her remaining bitterness and self-loathing, writing the end with a final exclamation point.

In his director's notes, Bell notes that Hedda is "swirling in a pool of fear, slowly drowning with every breath," and that's how Angeli portrays her. Swathed in rich fabric from foot to neck (courtesy of costumer Amy Hopkins), she snipes and belittles everyone drawn into her orbit. Her bright eyes stare toward a horizon she desperately wants and will never reach, moving ever farther away from the people she antagonizes. That distance between her and everyone else is her armor, and it fails her in a singularly feminine way. It's a fascinating performance, certainly the best of Angeli's career, and it stays with you long after Hedda Gabler disappears.