Stone Turtle Is Something New for Dogtown: a Date-Night Restaurant

How has the Dogtown neighborhood received its newest addition, Stone Turtle? Our server on a recent visit put it like this: "We've been told that we fit right in and are different enough to stand out at the same time."

In Dogtown, the fitting-in part is easy: Install an old-looking wooden bar, stock it with beer and whiskey, put some fried food on the menu and blend right in to the landscape. In fairness, it's not just the historically Irish neighborhood that turns to this tried-and-true playbook. Every city in the country has this sort of everyman pub. The past few years have been filled with restaurants pushing us out of our burger-and-fries rut, but the good ol' bar and grill still remains a staple because it's like Jack Johnson at a pool party: a crowd-pleaser that's nearly universal in its appeal.

Stone Turtle has the fitting-in part down. A corner storefront in the neighborhood's main intersection of Tamm Avenue and Clayton Road, the restaurant simply looks like it belongs. An exposed brick archway separates the dining room from the old-timey bar, which is stocked to the hilt with whiskey. A tin ceiling adds to the historic feel; candlelight dances off its metallic sheen and illuminates dark wooden tables and banquettes made from church pews. If you close your eyes and imagine what a Dogtown gastropub should look like, this is the picture. 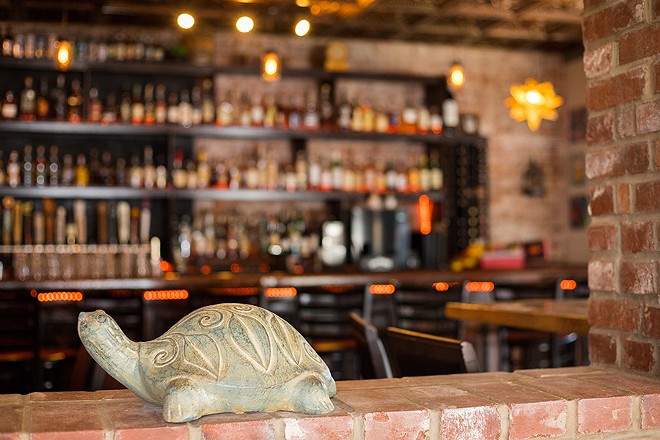 It's the standing-out part that's hard to do, especially at a place that is trying to elevate — not go against — the grain. To that end, Stone Turtle is off to a good start as well, offering the only real upscale dining option in Dogtown. Previously, if you wanted burgers, pizza or sandwiches, the neighborhood had you covered. If you were looking for a steak or pork chop, before Stone Turtle, you were out of luck.

Nick Funke, Stone Turtle's principal owner and general manager, saw the opportunity to change that when he came across a space in the heart of Dogtown. The St. Louis native has worked in the business for many years, from Barcelona and Flaco's Cocina in town to several restaurants in New York City, where he lived for eight years. He moved back to St. Louis in 2016 determined to open a restaurant of his own and reached out to his former colleague Maz Nooran to be part of the project. Nooran, who owned Momo's Greek Restaurant and Flaco's Cocina, liked Funke's ideas, and the two paired up with associate Adam Tanksley to realize their vision. 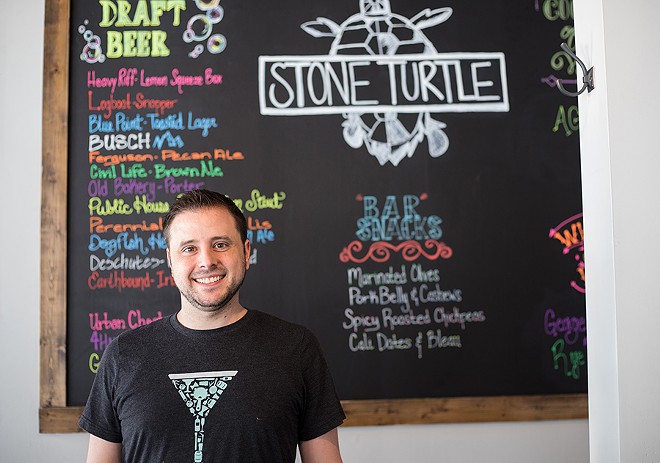 Funke and his partners initially assumed Stone Turtle would be a bar first, with food as a thoughtful background component to a strong whiskey-and-cocktail program. Those details are there, but they have taken a complementary role to the food — a situation that came about once chef Todd Bale came into the picture. A high school friend of Tanksley, the Johnson & Wales grad developed a menu of elevated American gastropub fare that seemed to demand its share of the spotlight. As Funke explains, it's not that Bale's food is all that fundamentally different; it's that the details he adds turn the ordinary into something special.

Stone Turtle is at its best when it strikes this balance between being familiar enough to be comfortable but quirky enough to keep things interesting. Its wings exemplify this high-wire act. Plump, fried and meaty, the appetizer has the heat and tang of a traditional Buffalo-style preparation, but here they're derived from a mango-and-habanero glaze. The combination gives a backbeat of subtle tropical sweetness to the fiery pepper sauce and softens its sting. 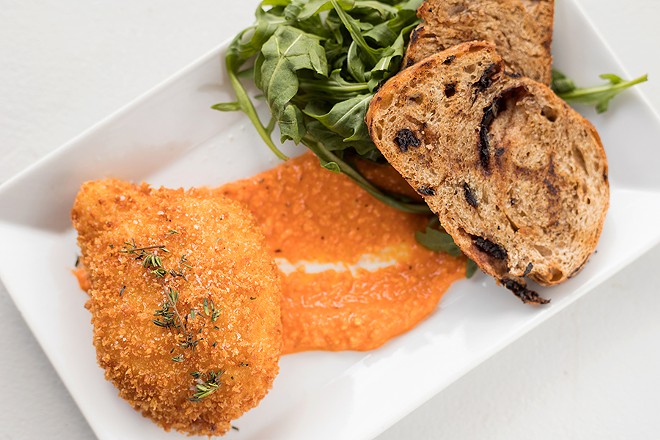 Fried burrata is a luxurious stand-in for mozzarella sticks. The silken cheese is coated in breadcrumbs and fried to a golden hue. When pierced with a fork, the molten burrata pours out onto the plate, mixing with piquant romesco sauce to form a creamy red-pepper concoction.

In addition to appetizers, Stone Turtle serves a handful of bar snacks meant to be nibbled on while drinking. Dates stuffed with blue cheese are fine enough but would have been better cooked. Served raw, the fruit doesn't concentrate and caramelize, which is what makes dates so good when paired with funky cheese. A bowl of seasoned cashews with hunks of pork belly was overly salty — from the spice blend, not the pork. Quizzically, that was bland and chewy.

The pork is a much better component on the "Turtle Mac & Cheese" appetizer, a decadent crock of noodles smothered in three-cheese sauce and bacon, then coated in crisped corn flakes. The slight tang of goat cheese infuses the sauce with a hint of funk, making for a haute pasta version of party potatoes.

Stone Turtle's lobster roll is its biggest disappointment: The room-temperature shellfish salad had a muddy taste and was so saturated in runny mayonnaise dressing it was soupy. The texture was off as well; the meat was pasty like tuna salad, as if it had started to break down, and though I saw pieces of lobster claw, I also spotted tiny tails that made me question whether the kitchen had mixed langostinos or crawfish in with the lobster. The mixture was overstuffed onto a bun that became soggy from the dressing and impossible to eat without a fork. Clearly, it's not the size of the roll that matters. 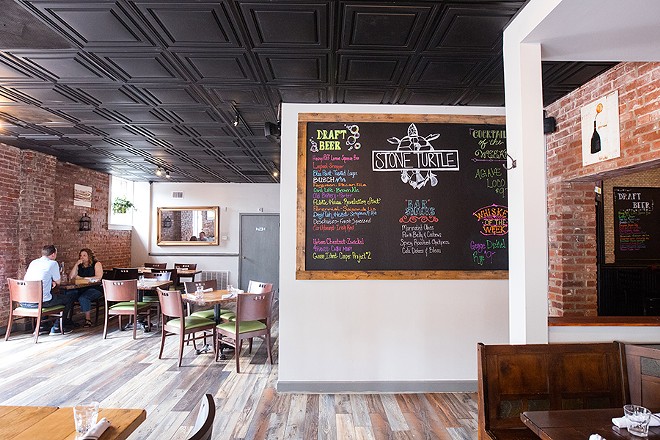 The rest of the main courses, however, were downright pleasant. An off-the-menu morel pasta dish shows that the kitchen can do much more than just bar-and-grill food. Penne noodles were tossed with a delicate lemon-and-herb sauce, which allowed the mushrooms' deep earthiness to shine through. This dish could be at home on the menu at any of the top Italian restaurants in town.

In place of traditional beer-battered cod, Stone Turtle uses a crushed-cornflake batter to coat its fried pollock. Old Bay seasons the fries and the fish, giving it the flavor of an East Coast seafood basket. The most pleasant touch, however, is the accompanying lemon aioli, a bright departure from traditional tartar sauce.

A perfectly cooked, thick-cut pork chop is Stone Turtle's best entrée, glazed with a savory pan jus and infused with grill char that gives it the sweet taste of a backyard cookout. Served atop creamy grits, this is the elevated pub fare that Dogtown was missing. 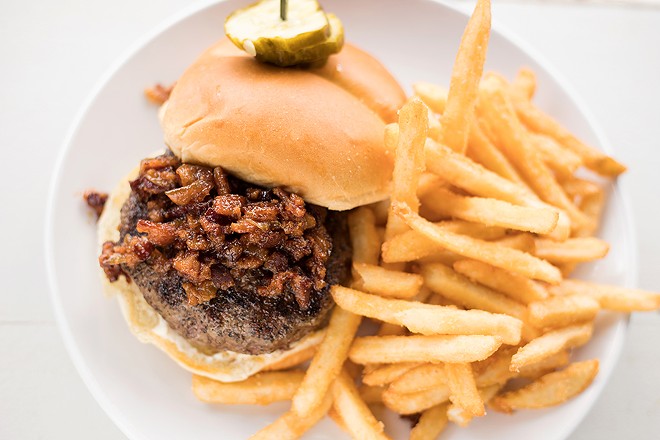 And though no one could have argued the neighborhood was missing a good burger, Stone Turtle's version proves there is room for another excellent option. Thick, juicy, well seasoned and perfectly cooked to medium-rare and some change, this is the quintessential bar-and-grill burger.

That it sits on a bun sized so that it is positively tailor-made to the patty makes it noteworthy. Smother it in velvety beer-cheese sauce and place a liberal dollop of sweet-and-smoky bacon-onion jam on top and it becomes the best bacon cheeseburger of your life, one that certainly stands out from the crowd — even as it fits in at the same time.