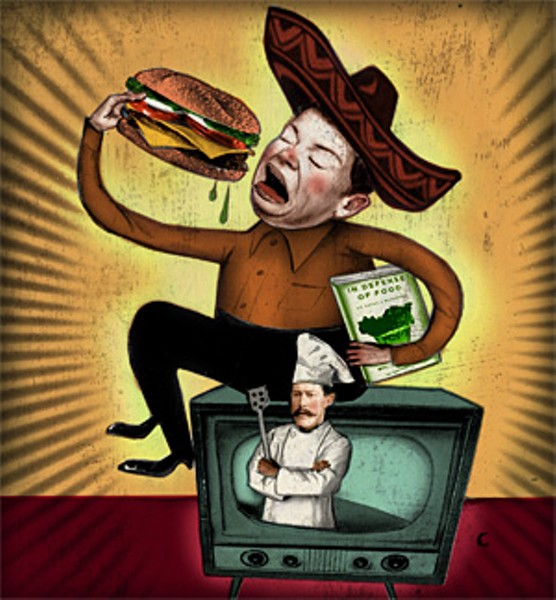 As an adult I've come to prefer Christmas Eve to the holiday itself. Christmas Day peaks too soon, the presents opened and clucked over before breakfast. Christmas Eve lingers like the finish of a fine Bordeaux, a quiet anticipation, suffused with the twinkling lights of the Christmas tree, broken only by the occasional expletive as, once again, I fail to wrap my wife's present in a single attempt. So when I realized that this week's column would be published on Christmas Eve, I decided to undertake — in no particular order, and with a child's disregard for practicality or even reality — my Christmas wish list for the St. Louis food scene.

Really Good Air Purifiers for Restaurants That Allow Smoking: Should St. Louis adopt a city- and county-wide ban on smoking indoors? I say yes, but we can debate that till we are blue in the face. (Though the smokers will probably pass out first.) Until the issue is settled, restaurants that allow smoking, even in partitioned rooms, should operate as many top-quality air purifiers as is feasible. Cigarette smoke has no place near an experience that, from street food to haute cuisine, is so focused on the senses.

A Moratorium on Flourless Chocolate Cake: It's dense. It's luxurious. It's boring. Along the same lines, a moratorium on crème brûlée and any dessert described as "molten."

An Appearance on Iron Chef America for Niche's Gerard Craft: Yes, Gerard Craft has received more national attention this year than any other St. Louis chef, but there is no reason he — or the city's culinary scene in general — should rest on the laurel of being named a Food & Wine magazine "Best New Chef." We need to keep St. Louis in the consciousness of foodies everywhere, and love it or hate it, Iron Chef America is the rare show that gives real chefs national exposure. Plus, Craft could totally wreck Bobby Slay. And while we're on the subject...

More National Exposure for Other St. Louis Chefs: St. Louis restaurants are getting exposure thanks to the sheer number of food-related TV shows: Sweetie Pie's and Iron Barley on Diners, Drive-ins and Dives; Pappy's Smokehouse on an upcoming segment of Man vs. Food. As much as I enjoy those restaurants, I'd love to see a column inch here or there for some of our other under-the-radar restaurants and chefs. Not only is the attention good for the St. Louis restaurant scene, it will also force our chefs to bring their A game all the time. Who's to say that out-of-towner at the corner table isn't an editor from Gourmet or Food & Wine?

An Honest-to-God Authentic Upscale Mexican Restaurant: Regular readers of this column know that I love tacos and tortas from taquerias more than just about anything. But whenever I'm chowing down at La Vallesana, Tower Tacos or another favorite, I think of the work of American chefs like Rick Bayless and Diana Kennedy and long for the hundreds of Mexican dishes I've never had. Maybe Barack Obama, a reputed fan of Bayless, will inspire a surge of would-be Topolobampos and Frontera Grills.

A Moratorium on Fried Calamari: Not because I don't love it. But we all need a break. Order the appetizer special instead. It might suck, but at least you'll have tried something new.

The Continued Growth of the Midtown/Grand Center Restaurant Scene: Yes, the economy is in a crapper so foul that it makes the infamous toilet from Trainspotting look like a suite at the Four Seasons. But we shouldn't let that obscure one of the city's most welcome recent successes, the boom of restaurants near Saint Louis University: Pappy's Smokehouse, the U, Triumph Grill, Buffalo Brewing Co., the Fountain on Locust and Wm. Shakespeare's Gastropub have joined perennial favorites Vito's and the Best Steak House for one of the city's tastiest stretches. And if you've driven through the area, you know there are still numerous properties begging to be redeveloped.

A Copy of Michael Pollan's In Defense of Food for Every St. Louisan: This essential treatise is a quick, easy read that might change your life. Hell, all you really need to know is on the front cover: "Eat food. Not too much. Mostly plants. "

More Local and Sustainable Produce: The teeming crowds I experienced at farmers' markets across the area this year suggests the demand for local and, ideally, sustainable produce is only growing. And it was a rare trip to Maplewood or Tower Grove when I didn't spot at least one local chef among the shoppers. But too many restaurants still rely on too much produce trucked or shipped from too far away. Of course, often — especially when dealing with meat — a better, more sustainable product will cost more, so for diners I hope Santa brings...

Willingness to Pay More for Less of a Better Product: I suppose this is my list's equivalent of a child asking for a pony or a fighter jet. Choosing between the $30 grass-fed rib eye and the $18 strip steak — or, nowadays, the $1 burger from the fast-food value meal — is a no-brainer, right? But that's exactly the train of thought that has skewed the American food system almost beyond a train of thought. Treating meat as a commodity keeps the price low today, only to pass the buck to the future health of our environment and ourselves.

A Moratorium on New Italian Restaurants: Whether your taste runs to T-ravs and Provel or osso buco and Parmigiano-Reggiano, this town has too many Italian joints, but not enough variety. By my count there hasn't been an original take on Italian cuisine in St. Louis since Acero opened two years ago. Take a break. Read up on Frasca in Boulder, Colorado, or any other example of the nation's new wave of Italian restaurants. Then we'll talk.

Peace and Prosperity: This has been a difficult year for St. Louis restaurants. The past few months, especially, have seen several establishments close their doors, and the worst, some economists claim, is yet to come. So if I could ask Santa Claus for a gift, it would be a steady flow of diners for all of the area's eateries.

Failing that, I'd ask you, the restaurant-loving reader, to consider visiting an old favorite for dinner — or even just for drinks and an appetizer — over the next couple of weeks. If you need to justify the expense, consider it a gift to yourself and your dining companions. No wrapping or assembly required.