STL Mugshots Built an Empire of Shame for $150 a Week

On STLMugshots.com, crimes are content. The site's visitors are treated to an endless scroll of thousand-yard stares, people reduced to their facial expressions at their lowest moments, with each mugshot, each click, leading to separate pages that package the arrest details alongside a column of automatically generated online ads.

On the homepage, an animated wall of prison bars slams across the St. Louis skyline, all-caps text screaming "NEW MUGSHOTS EVERY DAY" — and it's a promise the site has kept since at least 2014, with hundreds of mugshots harvested weekly and supplied directly from a central repository of the region's law enforcement data.

But on April 1, 2021, STL Mugshots suddenly went still. The website is still live, and the weekly newsletters keep coming, but each one displays the same mugshots, the faces never changing from those arrested and booked on March 31.

Functionally, the site is unchanged. It still features a "Matching Game" page, which summons five random mugshots and scrambles them alongside the associated charges — offenses ranging from minor traffic infractions to violent felonies. Refreshing the page yields new faces from the bottomless supply, challenging players to correctly match the face to the alleged crime: Does a bald, middle-aged white man seem like a trespasser, or someone who would drive without a license? Did a short-haired Black woman fail to register her vehicle, or was she arrested for parental neglect, or drug possession, or speeding, or domestic assault?

No matter the circumstances that led to their mugshots, or whether their charges were later dropped or amended or expunged, in St. Louis, they all wound up in the same place. The same website.

That is, until the supply was cut off.

Those running the website have not responded to requests for comment. The site's elusive owner, Edmund Tauk, is currently being sued by former publishers of his mugshot-focused newspaper, Behind the Bars, whose issues were sold in city gas stations for $1 before quietly disappearing at some point in the past three years.

For the people featured on the website, efforts to remove mugshots are met with either silence or demands for proof that a charge has been dropped — while others allege the website's owner demands cash for removal. No law exists to define this process, and even an official expungement by the court is no guarantee for action online. The site's mugshots persist in Google searches and background checks, following their subjects for years.

But there's no mystery here. The end of STLMugshots.com began on March 5, when the Riverfront Times contacted the St. Louis County Police Department with questions about how the website was able to not only post mugshots from every municipality in the county, but with remarkable speed — mugshots were being added in real time, with booking dates showing arrests occurring the same day the images appeared online.

In an email, the RFT asked if the department had a position on the use of its police work: Was it aware that its mugshots were being funneled to a website that exposed arrestee booking information from even minor incidents — or that the mugshots were being monetized alongside "sponsored content" and clickbait celebrity listicles?

"We are now aware," Tracy Panus, a sergeant and spokeswoman for the department, replied on March 11. She went on to explain that the RFT's inquiry had prompted further research into the department's protocols for distributing mugshots. The policy had been set in 2011, she wrote, "at the request of the County Counselor."

As a result, Panus wrote, the department would be reviewing its longstanding mugshot policy — and, as she put it, "looking into a way to change it." 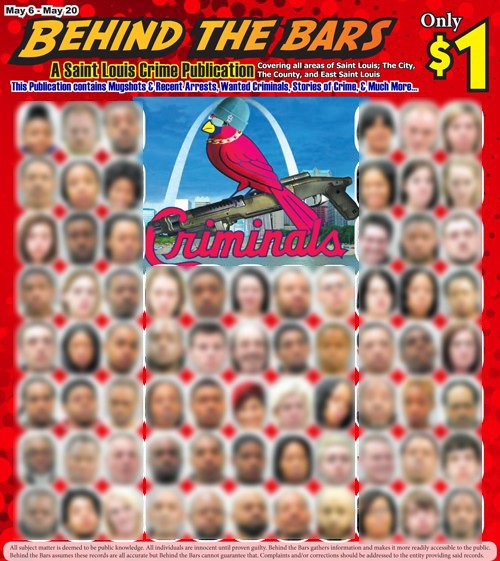 For years, STL Mugshots and the Behind the Bars newspaper comprised a niche media empire that thrived on an inexhaustible supply of new material, courtesy of St. Louis law enforcement.

But the real story of how mugshots travel from multiple police departments to a for-profit website is one that twists through a little-known government agency, the Regional Justice Information Service, better known as REJIS.

Based in St. Louis and founded in 1974, REJIS' website states that it was formed "under a cooperative agreement between St. Louis County and the City of St. Louis." It is governed by an executive director and a seven-member commission appointed by the St. Louis mayor and St. Louis County executive. In Missouri police departments, its footprint is nearly everywhere, functioning as a central hub for information, connecting federal, state and local law enforcement as they run license plates, check warrants and pull up booking photos.

And it is REJIS' ubiquity, and essential efficiency, that helped a local entrepreneur named Edmund Tauk become the king of St. Louis' mugshot publishing industry.

In an August 2018 letter to an attorney representing people suing STL Mugshots, Assistant St. Louis County Counselor Priscilla Gunn, acting as counsel for REJIS, revealed that in 2011 the county had asked the agency to give two publishers "arrest reports and specific data on a continuing and on-going basis."

There was nothing illegal about this. REJIS concluded that records were public under the state's Sunshine Law, which empowers anybody to request certain Missouri criminal records.

The open records law allows news sources, including the RFT, to request police departments provide details of ongoing criminal cases, even though the defendant hasn't been found guilty or innocent. It means stories can quote directly from probable cause documents and, yes, publish mugshots. Beyond just crime coverage, documents and information revealed through Sunshine requests are often key to quantifying the impact of government policies and identifying corruption.

This was something different, but, as Gunn's letter to the attorney repeatedly noted, entirely legal. She wrote that REJIS is "required to comply" with the state's open records law, and therefore would continue to provide Tauk, owner of the Behind the Bars newspaper, with direct access to the region's public safety data.

In return, Gunn wrote that Tauk and a second "requestor," Kyle Prall, the Austin-based founder of BustedMugshots.com, agreed to pay REJIS $150 every week to offset the "programming costs to provide specific information in the format requested."

"REJIS does not sell mugshots or data," Gunn's email continued. "REJIS passed the costs of producing the information to the requesters."

The exchange meant that Tauk and Prall received dozens of mugshots every day, direct from REJIS, with the monthly totals often exceeding 2,000 individual cases. Meanwhile, the public and journalists still had to file Sunshine requests and wait for the county to respond, a process that can take days (and sometimes, weeks) to get a single document. But Tauk and Prall now had nearly instantaneous access to the mugshots en masse.

With the arrangement in place, REJIS opened the floodgates of St. Louis County's crime data. According to Gunn, Prall was the first customer to make use of the data, gaining access in May 2012. The date corresponds with the start of the Busted Mugshots collection of more than 120,000 St. Louis County mugshots still available on the site.

Busted Mugshots stopped updating in April 2019 — just a few months after Prall himself became the subject of a twenty-count federal indictment. Prosecutors accused him of diverting more than $500,000 from sham political action committees backing 2016 presidential candidates Bernie Sanders, Hillary Clinton and Donald Trump. Prall eventually pleaded guilty and, in October 2019, a judge sentenced him to three years in prison.

Tauk ran into no such trouble with the law in St. Louis. He gained access to the REJIS mugshot supply in 2014, around four years after founding Behind the Bars. The sixteen-page tabloid offered eye-catching and often suggestive headlines — one run of issues featured stories titled "East side stripper tells all," "Fried chicken & cocaine" and "Clowning and frowning."