Steve Jobs Captures the Brilliance and the Abrasiveness of Its Subject

Steve Jobs: Genius. Visionary. Asshole. Steve Jobs is not a traditional biography of the Apple founder and, later, its returning hero and savior. We don't peek in on his childhood, or on the battle with pancreatic cancer that he eventually lost. This is much narrower, the tale of how one man revolutionized the computer industry and, as a result, changed the world through sheer force of personality. And as depicted here, that personality was mainly Breathtakingly Narcissistic Jerk, all raging arrogance massively overcompensating for past rejection — but also a personality of dazzling brilliance and foresight and imagination.

You've never seen such a compelling and entertaining and insightful movie about a genius jerk. Ever. Steve Jobs is as smart and as sleek and as essential as...well, as the unibody aluminum Macbook Pro I composed this review on. And it's funny in that snarky, let's-change-the-world-while-we-walk-and-talk Aaron Sorkin way. Sorkin has adapted Walter Isaacson's biography of Jobs in a way that only Sorkin would — by showing us an insider's perspective on three very public Jobs-Apple events: the 1984 launch of the Macintosh, the 1988 launch of Next computer (which Jobs founded after he was booted from Apple), and the 1998 launch of the iMac. We meet Jobs (beautifully embodied by Michael Fassbender, who doesn't much look like him yet manages to be eerie in the impersonation anyway) and become immersed in his unique view on the world during these last-minute preparations for the moments many of us are familiar with (probably most especially the 1998 one, by which time Jobs had morphed into the now-iconically black-turtlenecked figure introducing to us the latest techno-doodad we'd soon discover we couldn't live without). 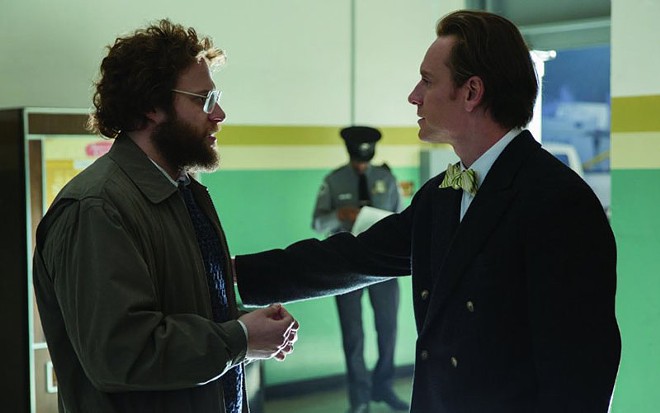 Steve Jobs is almost a stage play, except that virtuoso director Danny Boyle renders it all so cinematically that it could never be mistaken for one. Boyle uses real Jobs locations (such as the San Francisco opera house Jobs used for the Next launch) to glorious effect, letting them make marvelous statements on the outsizedness of Jobs and the mad beauty of Jobs' vision. But there's a stage-intimacy to how we eavesdrop on the interactions between Jobs and a small handful of people before each event, most importantly his head of marketing and best platonic friend Joanna Hoffman (Kate Winslet); and his daughter, Lisa (played, respectively, at ages five, nine, and nineteen by Makenzie Moss, Ripley Sobo, and Perla Haney-Jardine).

Much of what we overhear relates to engineering and marketing and corporate governance, and Sorkin and Boyle do not hold our hands through it. We get it anyway. Much of the rest of it relates to what a monster he was to his daughter, wrapping the family side of Jobs' life up with the work side; it's the same impulses driving everything he does. Which is perfectly understandable. Yet I can't recall a film that so beautifully gets right the complicated yet still creative mess that one person's life can be, or that manages it in such a deeply satisfying way.

And then there's this: All of what we witness has a certain impact only via what we bring with us into the movie. Steve Jobs assumes that we understand how important Jobs was to how we live today. It assumes that we have a long and intimate relationship with the Mac and with Apple products such as the iPod and the iPhone, or with the various non-Apple products that have raced to catch up with their innovations. None of that is in the film, and yet it is there all the same. There is nothing in Steve Jobs that is mythologizing of the man, and nothing in the film that is about the cult of the Mac. And yet it is all about how that happened anyway. If history is all about finding the roots of the present in the past, then this is one of the more compulsory bits of modern history I've ever seen.