TRENTON ALMGREN-DAVIS Nick Dondzila can't get to the gym, so he sets up his own in a parking lot.

For a split second, the bright midday sun flashes off the inner ring of the stack of ten-kilogram weights in the trunk of a blue 2013 Honda CRV, illuminating a young man's face and blond hair. The broad-shouldered athlete leans the weights against the parking chocks of an empty AT&T lot near his home in the Southampton neighborhood. He removes his Red Panda Strength hoodie revealing a teal tank top with a pouncing, crazy-eyed kitten and grabs a few more ten-kilogram and fifteen-kilogram plates, setting them next to the barbell and rubber mats on the pavement. Sitting on a small stool, the competitive lifter slips out of his tennis shoes and exposes his blue-eyed kitty socks. He laces up his white Nike Romaleos 2 weightlifting shoes and turns on a pump-up metal song.

Nick Dondzila, 27, planned to compete in the pinnacle of USA Weightlifting's competitions, the Nike 2020 National Championships this May in Lombard, Illinois. However, it has been postponed until December due to the COVID-19 pandemic.

He has made himself a mobile weight-training facility to continue lifting amidst the gym closures, including his team's, the Lab Gym. A blanket stretches across the CRV's trunk, and the middle row is folded up to fit all the plates, mats, clamps, shoes, a jump rope and barbell. He borrowed the mats and Rogue weights from another local gym, Output Performance.

"I don't need a masculine car. I need something I can put everything into," Dondzila says. 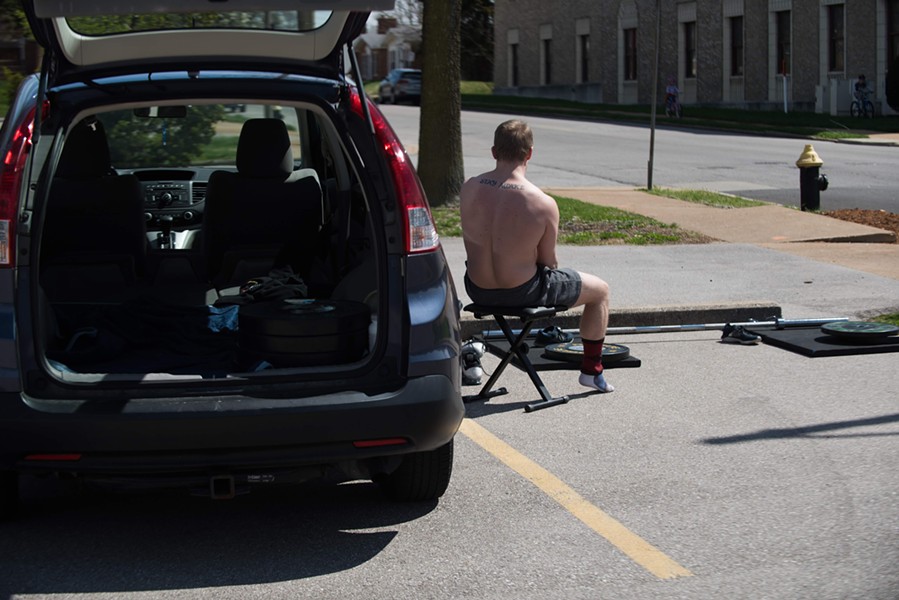 For the most part, the ten-year lifting veteran keeps it close to home, driving to the parking lot across the street, but he has gone to some parks with his gear as well.

At the lot, the music shifts to something more alternative. It is 67 degrees, and there is little shade to be found on the blacktop. A dogwood tree along Eichelberger Street buds its white flowers in the background. After three sets of 90-kilogram snatches and three sets of 100-kilogram power clean and jerks, Dondzila adds twenty more kilograms to the bar. He removes his tank top and slings it over the side mirror of the car. He twists his back muscles, looks at his hands and takes a deep breath, preparing himself for the next rep. He sets up his phone to videotape and walks over to the bar. A little boy and his dad in matching sunglasses eye the shirtless athlete as they walk their corgi.

Dondzila clenches his hands around the bar and heaves the bar to his shoulders. Holds. Then thrusts it above his head. Holds. His face turns red as he grimaces. The weight crashes back to the earth. Dondzila turns around. A "Stay Awake" tattoo referencing a song by the alternative band All Time Low stretches across his wide back. He walks over to grab his chair and sits down.

It is not too long before he does the set again.

"I guess because it's warm out, and it's less comfortable to sit down and relax. I'm just like, 'All right, let's do it,'" he says later.

Dondzila wrestled while at St. John Vianney High School, graduating in 2011. When he went to Loyola University, he lost the competitive outlet that wrestling offered. Dondzila tried CrossFit for a bit. He eventually transitioned into Olympic-style weightlifting. The past few years he has been competing nationally. He medaled at the Chicago nationals in 2017, won the university championships in that same year at 77 kilograms, earned a silver medal at the 2017 American Open Finals, won the American Open Series 1 in 2018 and captured bronze at the senior nationals in 2018 for the Lab Gym.

In the first week of March, just prior to the stay-at-home mandates, the athlete, coaching himself, placed third overall in the 2020 American Open Series 1 in Columbus, Ohio. He has one of the best clean and jerks in the nation. In Columbus, he finished second in the clean and jerk, lifting 175 kg (385 lbs) in the 77-kilogram (170-pound) class.

In the parking lot, he does the best he can with what he has.

"Theoretically, I don't have enough weight to push certain strength portions. So, I am slowing what I do down a lot, making it harder because I can't get as high of weight as I want," he says.

Along with adjusting the program due to the limits of his makeshift gym, Dondzila has looked up blueprints online to build a wooden squat rack to supplement his mobile training regimen.

"With what's happening in the world right now, it's demoralizing because I don't even know the next time I will compete is but ... today is day one: I wrote it out. I have a plan, and I'm going to try to progress things. ... What else am I going to do? Get some sun. Burn. I might just wear a swimsuit tomorrow," he jokes.

Besides weightlifting, Dondzila works on software-developing projects, searches for a developing job and hangs out with his father during the stay-at-home mandate.

His father plays pool competitively in local pool halls. "He's young, only 52, but still gets a little nervous," Dondzila says about his dad and the pandemic. Since they cannot go play pool together, they watch movies and build puzzles.

Weightlifting has been something that Dondzila has used to stay competitive, be fit, overcome his girlfriend driving away in an RV and, now, as a way to keep busy during the pandemic.

"Yeah the gravity has turned on today," he says sarcastically between reps, sweat dripping on his forehead.