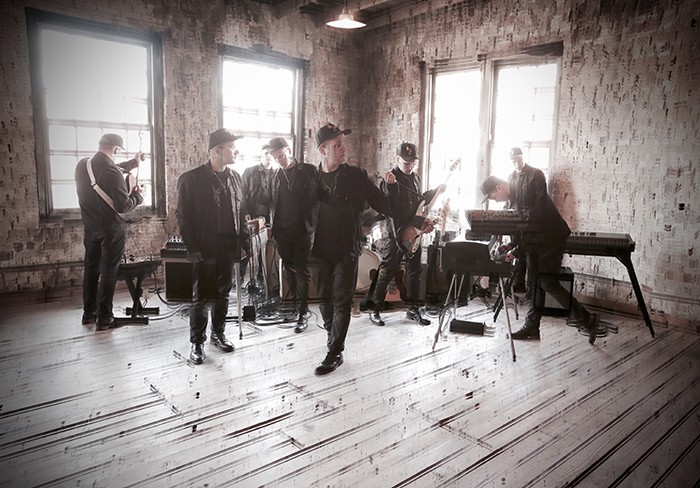 Kit Hamon, known in music circles as Stacey Winter, is an adept musician on a host of instruments, a versatile songwriter, a recording engineer of skill and (every bit as much as the rest) a great conversationalist. He's just a few weeks away from the official release of his six-song vinyl EP, We're Both Right Now, which will be celebrated at Off Broadway on September 3. A week later he'll be performing with his wife, Beth Bombara, at LouFest; their set comes the day prior to "a 40- or 50-date run" with the electro-pop band RAC, with whom Hamon is a touring player.

First up, though, is the release of his own EP, which was largely recorded at his own Lemp Electric Studio, with instrumentation by ... himself, alongside short bursts of collaboration by friends and longtime associates, including Bombara, remix/arrangement whiz-kid Adult Fur, Aaron Stovall on synths, guitarist John Calvin Abney and, lastly, Hamon's sonic sounding board, Karl Kling of RAC. While Kling added to the sheen, all the raw recording was Hamon's, as was most of the instrumentation.

"I try to play the studio as an instrument," Hamon says. "I don't, when I'm working, think, 'Here's the chord progression, here's the melody.' Literally, the first song came with the rhythm track of drums and percussion, then I added bass and chords around that. That's my way of writing, rather than starting out with a song that I could play on guitar in a coffeeshop. These songs have a rhythm to them, rather than my crafting a vibe to support just the lyrics. I don't know who cares about any of that, but it's how I do it.

"I'm pushing and brushing against the edge of what can do with a bunch of instruments. I don't consider myself a guitarist, though I play them in bands. I'm not a drummer, even though I've played drums in the touring band of RAC, at shows of 2,500 people. I just like to play instruments that fits a song, fits a vibe."

These six songs have a nice degree of range, two-to-four minute bursts of indie rock bliss: catchy, hooky, quickly familiar. A song that feels cut from a slightly different cloth is the fifth track, "Love and Money," which sounds as if it could be the under-the-credits title track of a breezy, clever art-house rom-com. "Love and Money," Hamon says, "is the only tune on the record that started out as a full-on song, so production went on top of that. I thought, 'This feels soul-esque, so I'll sing as high as I can. So I'll sing high, then will sing even higher and then I'll put a hilarious guitar solo on, because why not?' Honestly, I feel like this record is a practical joke on myself. I'm not sure if it's serious, but it's fun, so who cares?

"As far as it being any type of departure," he adds, "I've played in a lot of very different projects. Some work in this same way and some don't. But today, it seems like a pretty nice step forward for myself."

Musically, Hamon's put himself in a sweet position of late, even if he admits that 2017 has "been the slowest in recent years" on some musical fronts. But he's been opening himself up to inputs from far and wide: Abney and Kling, for example, aren't based here, while his current live band (Bombara, Stovall, drummer Mike Schurk and bassist Kevin Bachmann) includes some of his besties.

"I agree with a lot of the St. Louis-centric thing," Hamon says. "There're a lot of bands that do that and it's really cool. There's a lot of untapped talent locally. Not even 'untapped,' but tapped only locally. And there's something beautiful about that. But being on the road and meeting people in different places ... I've had so many weird late-night conversations, playing records at someone's house. You learn something from those moments, when you're outside the norm of the people that you see every day and hang out with on your own."

Hamon's the type to challenge himself frequently. His EP album cover is an example. The colorful, patterned work is a literal mistake: His self-learned coding rendered his cover a visual example of an error made while rooting for bad code. The result, though, was lovely enough that it merited a permanent place in his catalog. "My screwing that up seemed a perfect metaphor," he says.

For the album's release show, Hamon plans on offering an accompanying coloring book, which will also be an option for digital-only buyers. And he'll have a band in which the players are "all monsters. And they all said, 'Yeah, I can play that. So let's play it like the record,' which is also great."