I Rode My Ass Off at St. Louis' World Naked Bike Ride

SARA BANNOURA St. Louis' iteration of the World Naked Bike Ride is the third largest in the entire country.

I am wearing a cherry red tutu, held up by suspenders, and it barely covers my tiny boxers — the smallest pair I could find at Target on short notice. With each step I can feel the suspender straps sliding across the bare skin of my back. It is July 15, and I am overdressed for St. Louis' tenth annual World Naked Bike Ride.

I'm standing outside HandleBar, the bicycle-themed bar in the heart of the Grove. Its owner, Tatyana Telnikova, is wearing a two-piece bathing suit and covered neck to thighs with glitter. She, too, is overdressed, at least compared to the parade of painted nipples and sparsely obscured genitals passing behind us.

To my left is Matt Hartman, the tattooed and mustachioed owner of the Spoked Bikes & Stuff shop. He faces Matt Green, the administrator of the Grove's Community Improvement District. Telnikova has a very practical nickname for the two — "the Matts." Since 2014, Telnikova and the Matts have made St. Louis' naked bike ride among the largest in the United States, exceeded only by Chicago and Portland.

The Matts' hands are at their waistbands, like gunfighters. Green, already shirtless, steps out of his denim shorts to reveal a tiny pair of striped blue briefs. He hooks a walkie talkie to the elastic waistband. But Hartman hesitates.

Telnikova follows. "Do it, Matt! You gotta do it!"

For Telnikova and the Matts, this year's ride is special for multiple reasons. Attendance is expected to shatter 2016's record-high of 2,000 riders. And the importance of marking the tenth anniversary since St. Louis' first World Naked Bike Ride isn't lost on them, either. 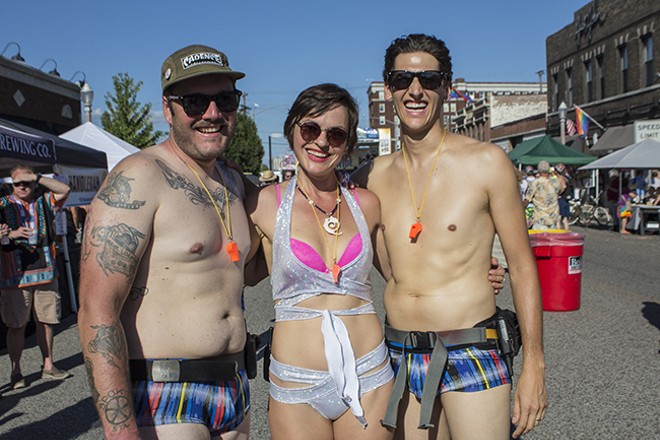 In the past decade, the ride has become one of the city's strangest and most delightful traditions, a massive group biking event that is many things at once: a cyclist's dream, a flamboyant parade, a street festival and a nudist gathering. Crucially, it's also a political protest — an act of free expression protected under the First Amendment. The protest/bike ride has the blessing of city officials and attracts thousands of spectators along the route. The ride isn't some perverse secret or mass act of civil disobedience. It's a public celebration. And it shows no sign of slowing down.

That the three principal organizers of a naked bike ride are themselves not naked is one of the quirks of the event. Nudity is not required. The ride is billed under the slogan, "Bare As You Dare."

As the Matts check out their identical looks, Telnikova is mulling her own options. "I don't think I can do this without a bra," she notes. "Because my nipples might pop out."

"That's cool, though," Green says in an attempt at reassurance. "It's the naked bike ride."

"Yeah," Telnikova says, "but I don't like when they pop out unintended!"

It's a quarter past five, and already the closed-off stretch of Manchester is filling with bodies in every imaginable state of undress — and also many unimaginable ones. Some are more unimaginable than others.

A red, white and blue feather boa is affixed around Kurt Pfao's junk by a length of Velcro strap. Tanned and solidly built, with an immaculate salt-and-pepper goatee, Pfao says he's lived as an avowed nudist for years. He started attending the World Naked Bike Ride in 2013.

"It definitely seems like it got bigger," observes Pfao. "The first year I did it, they were still on the other side of the Tower Grove Park, and I was like, 'Holy crap, there's not enough room.' The crowd was spilling out everywhere. The following year they brought it here, and I see why. There's just too many people."

In the middle of the interview, a middle-aged woman wearing large sunglasses — though fully clothed — approaches us. She wants to take our picture. "I think you look fantastic," she says. I take her lack of specificity as a compliment, though I suspect she's mostly talking to Pfao.

That's the thing about the naked bike ride's emergent set of social mores; along with participants and random bystanders, a separate crowd of amateur and professional photographers wanders around snapping shots of the outfits and un-outfits. Naked bike rides are pageview gold for area publications; even the Post-Dispatch, St. Louis' determinedly mainstream paper of record, isn't above getting in on the action.

While a few revelers cover their faces with masks, for the most part, the naked and semi-naked throngs don't seem to mind being captured by photographers. (And the cameras will be out in even greater force during the actual bike ride, when many semi-nude riders choose to finally drop the "semi" and let it all hang out.)

These photographers generally seem to follow the suggestion posted on vendors' booths, which recommend obtaining consent before snapping pics. A few photographers on the fringes, however, noticeably shirk these recommendations.

In the spirit of full disclosure, I should note that after four years at an alt-weekly, cultivating sources (and friends) that might shock my conservative high school classmates, I'm not entirely new to the world of casual nudity. I once reported on a clothing-optional bowling party, and I've attended a handful of privately hosted "clothing optional" parties in the past.

Still, nothing has been close to a public gathering of this magnitude. I wasn't expecting random people to take photos of me with my arm flung around the copper-toned shoulders of a nudist with a feather plume fixed to his dick — but here I am, at the center of an insistently weird and increasingly popular event whose existence seems to defy conventional wisdom at every turn. Apparently, I've just got to roll with it.

Even in late afternoon, the heat is still creeping in the upper 80s, and I make my way toward a stage set up at Kentucky Avenue. I spot Sex Positive St. Louis organizer David Wraith, naked but for a beige thong, cooling off in the shade of nearby trees. 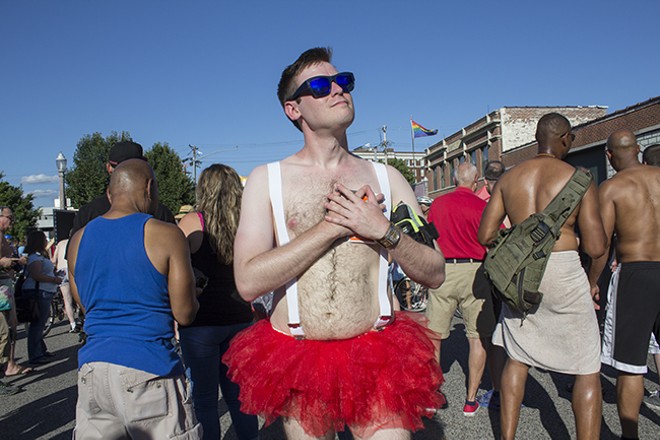 I first met Wraith three years ago at his organization's naked bowling party, and I'm in the middle of explaining to him that I haven't even touched a bike in more than four years when we're interrupted by woman carrying a clipboard.

"Excuse me," she says. She's talking to me. "Are you interested in being part of a costume contest?"

I immediately say yes, managing, somehow, to skip over the part where I ask a skeptical question about what kind of costume contest she's running at a gathering of naked and mostly-naked people.

"We need people for the 'Most Hairy' contest," she says, answering the question for me. She glances at my torso. I've got a bramble of hair that began growing at age thirteen. It has since spread across my belly, gathering in what I've always considered a reasonably dense, nest-like tuft at my breastbone. I find myself filling with pride — only to be stopped almost immediately.

"You're not that hairy," the woman tells me. "But we're having a hard time finding people to be part of the contest. So..." she pauses expectantly. "Is that alright? You'll be at the stage at 5:30?"

I suppress a sigh. I've just got to roll with it. Sure, I'll be there at 5:30 to balance the contest roster against more hirsute nominees.

As the organizer leaves, Wraith fixes me with a serious look.

"I'm supposed to be judging that contest," he deadpans. "I will show you no special treatment." I tell him that I expect nothing less.