For our 2017 RFT Bar Guide, we went deep into the heart of the city's cocktail culture. From the bars that made our scene what it is today to the great spots right in your neighborhood, we've got them all covered in this almost-close-to-comprehensive list. Search for your favorites are try something new.

These innovators deserve credit for making the St. Louis scene what it is today 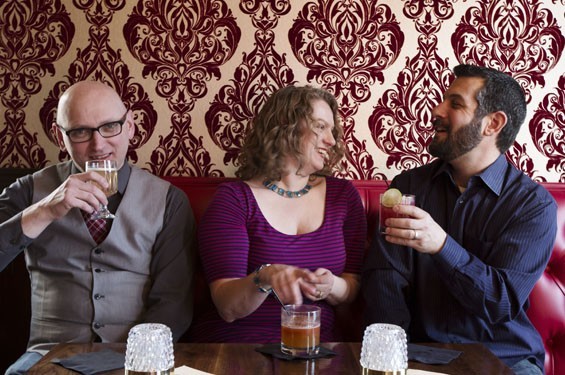 Though it's difficult to remember in today's progressive drink environment, there was a time when going out for a cocktail in St. Louis meant a watered-down vodka tonic or, if you were feeling adventurous, a specialty martini. Then came Ted Kilgore, a former industrial perfumer who transformed the city's cocktail scene, first at the acclaimed Monarch, then at Taste and finally, at his own bar, Planter's House (1000 Mississippi Avenue, 314-696-2603). Kilgore redefined what a drink could be, pushing and creating and putting as much thought into a glass as an acclaimed chef puts on a plate. Together with his wife Jamie and partner Ted Charak, Kilgore has created a temple to cocktails at Planter's House, honoring the history (Planter's House is in a former hotel that bore the same name, and its bar-within-a-bar Bullock Room is named after Tom Bullock, a St. Louisan and the first African-American to write a cocktail book) even while pushing toward the future. These days, Kilgore has mostly stepped away from the shaker, spending most of his time as beverage director, helping to facilitate and give direction to cocktail ideas, but his reputation for being the best has attracted the best: Planter's House is the place to work for the bartenders who not only continue Kilgore's legacy but forge their own paths — and in turn define what it means to drink in St. Louis.

It's no surprise that the chef who bears the most responsibility in making St. Louis dining scene the jewel it is today is also credited with helping to define its cocktail scene. Granted, a handful of foundational bars and restaurants came before, but when Gerard Craft opened Taste (4584 Laclede Avenue, 314-361-1200) in a tiny storefront in Benton Park, he did so with the vision of making cocktails that were more than just thoughtful — he wanted them to be complementary to, if not an extension of, the food coming from his kitchen. By tapping Monarch's Ted Kilgore to head his bar program, Craft gave the already acclaimed barman a venue to spread his wings and show the city just how much could be done in a glass. Kilgore is gone, and Taste is now in a handsome space in the Central West End, but the bar's legacy is still on display here, as well on the menus of every St. Louis cocktail bar worth its salt. Perhaps it's more than just coincidence that we refer to drinks these days as "craft cocktails." 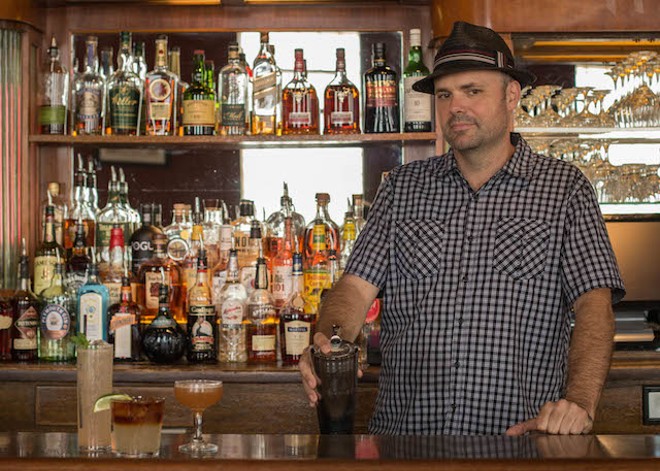 In 2005, the St. Louis cocktail scene was grim. Then came Steve Smith, who had the vision to know we wanted more even before we ourselves did. Smith purchased the old Real Bar and partnered with his friend Tim O'Connell with the mission of creating a real-deal cocktail-focused bar, anchored in balanced drinks and professional service. Their spot, the Royale (3132 South Kingshighway Boulevard, 314-772-3600), quickly became the preeminent place in town for good drinks, igniting a spark that would turn our scene into the vibrant one it is today. You wouldn't suspect the role the Royale has played in our city's cocktail culture simply by walking into the building today. The vibe is unassuming and relaxed, the essence of laidback south city. However, once you taste one of the Royale's perfectly balanced, impeccably crafted concoctions — such as the gin, cucumber and lime "Subcontinental," which has been on the menu since day one — you'll realize you are tasting the very essence of what makes drinking in St. Louis so special. Grab a table on the lovely patio, if you are lucky enough to get one, and enjoy drinks made with skill but without an ounce of pretentiousness.

These bars aren't for traditionalists. But if you're up for experimental and even wacky mixes, they know how to whet your whistle

The Libertine (7927 Forsyth Boulevard, Clayton; 314-862-2999) has been many things since it first opened in 2013: a haute Southern table with a Food and Wine "best chef" winner, a Mediterranean-inflected temple of decadence and now, a fiercely local homage to the bounty of Missouri's farms. Amidst the reinventions, one constant has been the restaurant's place in the upper echelon of St. Louis' cocktail scene. Helmed by head barkeep Ben Bauer, the Libertine's bar has garnered a reputation as a top spot for experimentation. Coupled with owner Nick Luedde's creative, anything-goes spirit, Bauer's penchant for forging new boundaries makes the program unique. From housemade pineapple and duck fat cachaça to wormwood bitters, Bauer draws upon his interest in culinary arts to make the bar an extension of the kitchen. Always researching, Bauer doesn't spend a day behind the bar without trying something new — and yes, that has included trying to persuade his bosses to let him put a pig's blood cocktail on the menu. It hasn't happened yet, but don't put anything past this visionary.

Mike Randolph is one of the city's most innovative chefs, and so it's no surprise he'd call upon one of St. Louis' most innovative bartenders to run his cocktail program. Headed by Jeffrey Moll, the bar at Randolfi's (6665 Delmar Boulevard, University City; 314-899-9221) is less a place to grab a drink and more a drink-centric classroom — literally: there's a glossary of terms on the menu. Moll has curated a selection of roughly 25 vermouths, nearly that many selections of amaro and an equally impressive list of fernet. That may intimidate you, but it shouldn't, as Moll is happy to be your guide. As for cocktails, his drink list is divided between "classics" and "adventurous," the latter featuring drinks with names such as "Advice from a Fortune Cookie." It makes sense that Moll has a background in fine arts. He was in need of a creative outlet when he found a kindred spirit in Randolph, who gave him a chance to helm the bar at his acclaimed Little Country Gentleman, even though Moll had zero professional bartending experience. Determined to prove himself, Moll has since dedicated himself to learning everything he can about spirits and developing palate-provoking drinks. His bar is a place to be inspired.

Matt Seiter, who launched the cocktail program at Sanctuaria Wild Tapas (4198 Manchester Avenue, 314-535-9700) and served as its head bartender for four years, wrote a 2012 book dubbing the place "the dive bar of cocktail bars." Even though five years have passed (and Seiter has moved on), the sobriquet still feels apt. The vibe at Sanctuaria is a little bit goth, a little bit rock 'n' roll — and the cocktails are appropriately complex and a bit edgy. It's not at all surprising to find a cocktail on the menu called the "Iron Maiden" (gin, pomegranate liqueur, rose water, simple syrup, lime and basil) or to find bitters play a key role in many drinks. And if you're truly seeking the best, don't miss the list of "Show-Offs" for a half-dozen drinks that feature top-shelf spirits (and prices to match). But it's not all dark hedonism; Sanctuaria serves a series of house cocktails with sherry and port, warm spirits that pair well with the Spanish tapas on offer. 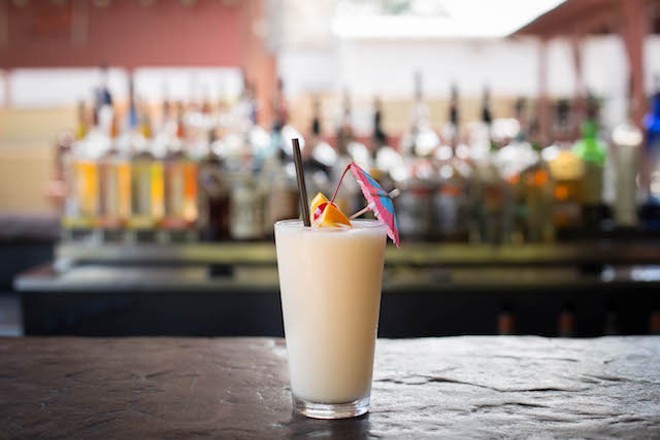 Twelve years ago, Chip Schloss looked at the stretch of Manchester Avenue between Vandeventer and Kingshighway and saw huge potential. Aside from the gay bars that have long anchored the neighborhood, the area now known as the Grove wasn't yet a major nightlife destination — but Schloss knew it could be, and so he opened the venerated Atomic Cowboy (4140 Manchester Avenue, 314-775-0775) in 2005. In the decade-plus since, the Grove has become one of the hottest spots to drink in all of St. Louis, bursting with bars and eateries and music venues. Even with the influx of new businesses, though, Atomic Cowboy stands alone. The venue could be better described as a "sprawling complex" than a mere bar at this point, with the addition of the Bootleg music venue and a large outdoor stage on the patio. It isn't just music that keeps patrons coming back, though. Atomic Cowboy now has at the helm of its drinks program hot-shot bartender Tony Saputo, the RFT's pick for "Best Bartender" in 2015. Less a "mixologist" than a "tastebud whisperer," Saputo's advice for customers is simple: "Stop passively consuming and start actually tasting." With cocktails as delicious as the "Afternoon Delight" — a concoction featuring two kinds of rum, Licor 43, Pierre Ferrand Ancienne Methode dry curaçao, Frangelico, salt, bitters, lime, orange and cream that tastes like a damn Dreamsicle — that won't be a problem.

Turn the page for cocktail bars to visit when you're feeling like a night out on the town.