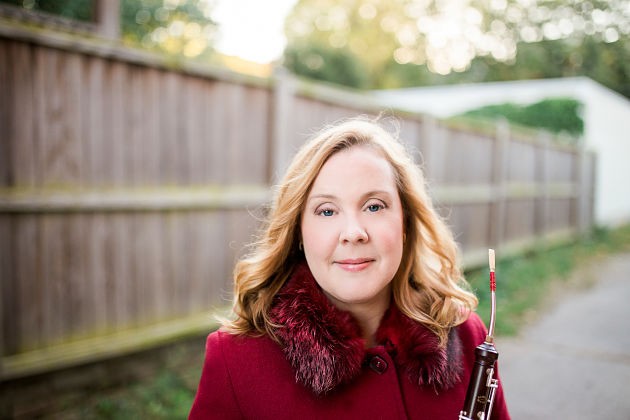 For members of the Saint Louis Symphony Orchestra, the holiday season brings a yearly dusting-off of some old chestnuts. As the month of December goes on, the SLSO calendar becomes less a showcase for the works of Bruckner or Mendelsohn and more a repository of holiday shows and Christmas pops matinees.

Cally Banham, a symphony musician who is normally featured on the English horn, notes that the SLSO’s programmers walk a line between popular, seat-filling favorites and newer holiday fare.

“I think it is a little bit of a challenge for them to come up with something fresh; there are obviously things that are tried and true, the warhorses of Christmastime like selections from The Nutcracker, that will never get old or tired,” she says.

Banham is always happy to play the holiday hits; her English horn even gets a prominent role in a few of those Nutcracker selections. But this year Banham has added her own spin on a range of Christmas tunes from the sacred to the secular with her album Cor Christmas. Befitting her pedigree, there are plenty of orchestral assists from her SLSO chums on strings, brass and percussion. But across thirteen tracks, Banham collects a varied stretch of arrangements and moods that push Cor Christmas outside the realm of classical music.

She began researching and plotting almost three years ago, picking songs from across several hundred years’ worth of Christmas tunes.

“What I was listening for when I was trying to make these decisions was the quality of the melodies, since that would be what I was playing,” Banham says. “I chose some that were more operatic in melody; ‘White Christmas’ is like that, and ‘Comfort Ye’ from Handel’s The Messiah is the perfect one in being so expressive with the singing voice.”

Banham says that her instrument, a tenor-voiced double reed in the same family as the bassoon and oboe, is often featured as a solo instrument in orchestras. And though it isn’t a sound likely to be buried in the mix, it’s also not an instrument featured often on its own.

“I knew that an English horn could carry a whole album, but I knew that there had to be sonic breaks as you’re going through the journey of the album,” says Banham. “And that’s why there are huge features for the other instrumentalists.” Melissa Brooks’ cello takes over the first half of “Silent Night,” using an arrangement by Chip Davis that has none of the bombast and spectacle associated with his seasonal behemoth, Mannheim Steamroller. Later in the album, the trombone section of the SLSO gives resonance to a slew of traditional English carols.

Banham and her colleagues treat hymns like “Lo, How a Rose E’er Blooming” with requisite grace, but the disc’s greatest twists come through the inclusion of tango elements early in the program. This is no surprise given Banham’s role as the founder of local tango group Cortango. (Cor anglais, the French term for the English horn, accounts for the “cor” suffix in Banham’s work.) Tango’s rhythmic pulse underpins the album’s opening track, “White Christmas,” and heavily accented pizzicato strings give way to a stately sway in “Carol of the Bells,” which allows Banham to show her instrument’s lithe and beguiling charm.

In the context of tango music, though, the English horn is an outlier. Banham compares its reedy nature to that of the bandoneon, an instrument in the accordion family which is found in nearly all traditional tango outfits. “As far as I know, I’m the only English horn player to start a tango band,” she says.
Pianist Adam Maness plays regularly in Cortango and assists on Cor Christmas as well, both as instrumentalist and arranger. His jazz trio, with Bob DeBoo on bass and Montez Coleman on drums, supports Banham on a few modern standards, “I’ve Got My Love to Keep Me Warm” and Vince Guaraldi’s “Christmastime is Here.”

Maness isn’t the only link between the worlds of jazz and classical on this album. Nate Hershey, best known as an organist in a number of local funk and soul bands, served as producer and engineer, helming a recording session on the hallowed stage of Powell Symphony Hall.

Banham and Hershey worked together on another local release, and Banham recalls when their styles — hers from the note-perfect world of classical music, his from the improvisational background of jazz — led to some early miscommunication in the studio.

But that auspicious session set the table for what became the pair’s co-production on this album.

“I was so impressed by the way Nathan prompted me, handled me, how great his ear was about the timbre of the English horn,” Banham says. “I was really happy with the finished product; it was one of those things where you just know. And I just went with my gut.”