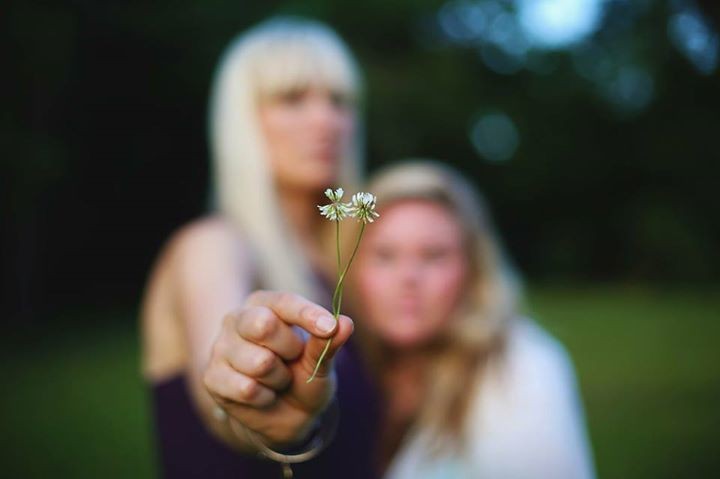 When the schedule for 2016's LouFest was finally revealed a few months ago, there was much to love: foremost, the festival boasted a more diverse and representative lineup that encompassed rock, country, soul, hip-hop and blues. But looking past the marquee names, local music fans likely felt validated by the increased number of St. Louis bands on the bill. Many hometown bands helping put the "Lou" in LouFest have been on the grind for years — bands such as Foxing, Bruiser Queen, Aaron Kamm & the One Drops and Illphonics have hustled both in and out of town to spread their music.

One local act, though, was a bit of a sleeper pick: The Sleepy Rubies, the acoustic folk act helmed by Emily Wallace and Ali Ruby, has just released its first EP. The pair aren't exactly new to local stages — the two have performed around town, together and separately, for years — and the Sleepy Rubies' five-song Great Big Love shows the singers' prowess at crafting both sensitive and powerful songs about creative and romantic queries.

Wallace and Ruby are sisters, first by adoption and later by harmony and musical intuition. Over email, the pair talked about their evolution, beginning in Winfield, Missouri, where they used to square off against each another at talent shows. "We started singing and playing shows at fifteen and sixteen in St. Louis and the surrounding cities," Ruby says. "Emily and Ali, that's what we called ourselves."

The sisters have drifted in and out of other musical projects — Wallace in particular is frequently seen performing solo gigs and singing with Al Holliday's East Side Rhythm Band. But earlier this year, Ruby and Wallace decided to rebrand their act and record with Jason McEntire at Sawhorse Studio. "Our family's last name is Ruby and our music is laid-back, so we started calling this project the Sleepy Rubies," Ruby explains. "With all of our musical history, I think we wanted something fresh and new and easy."

The EP begins with something akin to a mission statement with "South City," a rumination on personal success and artistic fulfillment. The song suggests that while few on the south side are striking it rich, the simple pleasures of love, fellowship and music more than make up for some elusive windfall.

"We have this beautiful, supportive community in south city St. Louis of musicians, artists, chefs, mail carriers, mechanics, bartenders and so on," Wallace says. "We have some pretty perfect pets and dudes. We are sisters that get to make music together and play awesome shows with awesome people. This is a great life.

"The song "South City" reflects that whole attitude," she continues. "Being grateful for what we have and letting this new musical journey go carefree and easy has helped on the happiness front tremendously."

As befitting their origins as a duo, the Sleepy Rubies' material is centered around the sisters' voices and Wallace's guitar. "Colorado," the EP's second track, thrums with the interplay between vocal stridency and gentleness in a song about lovers' wanderings and reclamations. It's a simple arrangement, and one that benefits from not sounding overstuffed, and Jim Peters' (Fog Lights, the Provels) lead guitar line gives folksy counterpoint to the pointed rhythmic strums.

"Since we've been playing music in St. Louis for so long, we are lucky to have a massive amount of talented friends," Ruby says. "There are some incredible players in this town." In addition to Peters, Tony Barbata, Mark Hochberg and Shawn Hart contribute to the recording, which features a dramatic grand piano on the title track and sensitive string work on "Darlin." Those collaborations have bled onto the stage as well, as the band's late-July release show was filled in with accompanying players. "Playing Off Broadway for our CD release show just reaffirmed that we are so lucky to have four brilliant performers making music with us," Ruby says.

As the Sleepy Rubies prepare to play LouFest in September, Wallace and Ruby have had to pinch themselves again and again over the opportunity. After receiving the invitation, "we jumped around quite a bit, punching the air and dry-humping lamps, coffee tables and different things around our homes," Wallace says. "It was super mind-blowing."

Even if they are the newest band on the bill, Wallace and Ruby will rely on their decade-plus of performance, songwriting and sisterhood to make a strong impression. "We plan on writing, practicing and really trying to make our hour slot be as badass as possible," Wallace says. "Being a brand new group, it might seem like we are out of our league to some, but we are all seasoned players. We are just so thankful and pumped."