St. Louis Shakespeare's King Charles III Is a Timely Look at the Man Who Could Be King

Written by Mike Bartlett. Directed by Donna Northcott. Presented by St. Louis Shakespeare through August 26 at the Ivory Theatre (7620 Michigan Avenue; www.stlshakespeare.org). Tickets are $15 to $20.

King Charles III, Mike Bartlett's imagined future history of the potential British monarch, begins with a funeral and ends with a coronation. In between those two milestones we witness a surprisingly non-traditional king spark a near-revolution, the imperilment of the royal family, the political maneuvering of both opponents and friends and an unlikely salvation wrought by an act of true love. That alone would be enough to give Bartlett's drama a Shakespearean glow, but Bartlett underlines his intentions by using iambic pentameter throughout. Who knew that Charles, Prince of Wales, carried such terrific theatrical potential?

St. Louis Shakespeare's current production of the play more than fulfills that potential. In director Donna Northcott's capable hands, Bartlett's bold conjecture about what kind of king that Queen Elizabeth II's oldest son might be becomes a fascinating morality story and a humanistic tragedy. A king is made and a country nearly destroyed, all because of one man's fear of how history will remember him.

That king is Charles (Colin Nichols). As the play opens, his mother is dead and the crown is now his, and he wants to make a huge impression in what time he has left. When a new law that will limit the freedom of the notoriously voracious English press hits his desk for his ritual signature, Charles refuses to sign. (While the British monarchy is symbolic and wields no political power, the royal signature is a necessity for a law to take effect.) He believes a strong press is the last hallmark of a strong democracy, and while he would personally benefit from the change, he stands his ground. Thus begins a showdown between the king and the staunchly anti-royal Prime Minister Kristin Evans (Andra Harkins), with the country itself equally divided. 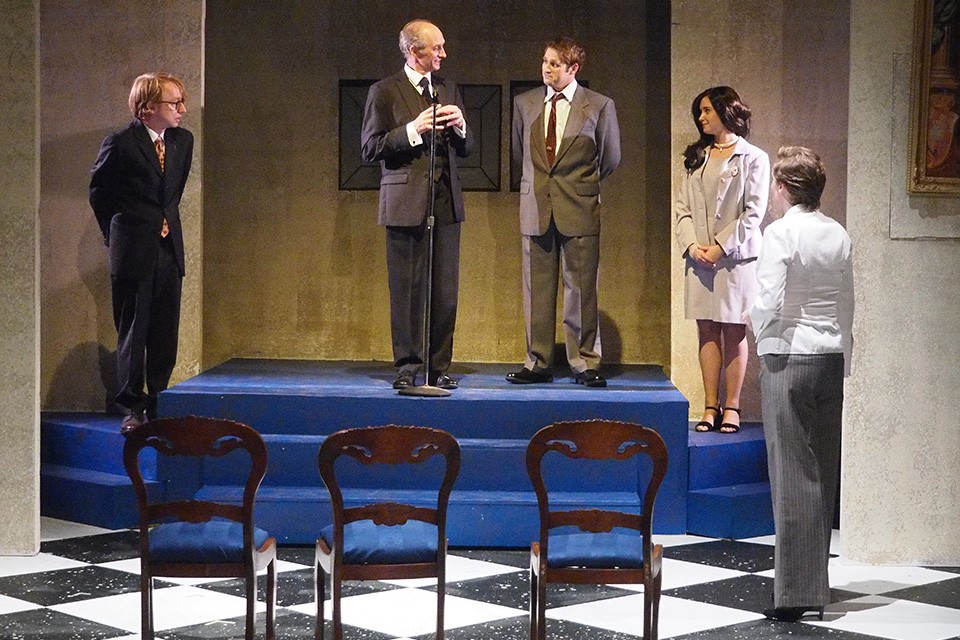 Nichols wields an arsenal of awkward grimaces to depict Charles' discomfort with the English practice of repressing emotion, even as he talks openly of his love for his sons, William (Michael Bouchard) and Harry (Jeremy Goldmeier). The boys are his most loyal subjects, refusing to argue for or against any course of action out of respect for his paternal authority. Harry is mostly too preoccupied with his new "common" girlfriend Jessica (Britteny Henry) to do so, but William stands firm even when his wife Kate (Lexie Baker) urges him to take charge. She's clearly the real force in their marriage.

As firm and commanding as Charles wants to appear, he's also unintentionally quite funny thanks to Nichols' dry delivery. "I'm not prone to certainty," he gravely tells the members of Parliament, even as he's dissolving the legislative body by royal decree. He warns one turncoat, "I can wait a long time," but his threat is only a reminder of his long-delayed ascent to the throne. The man who fears how history will remember him transforms from an ecologically friendly gentleman farmer to bellicose recluse surrounded by soldiers and tanks, which is the cruelest joke of all.

Despite the very English setting and subject matter, there's an eerie, through-the-looking-glass feeling to King Charles III. Charles risks everything to protect the press and nearly destroys his country, while America's own king attacks the press at every turn and is currently destroying our country. Bartlett's script, which was written in 2014, accurately predicted several important elements, such as Harry's non-royal girlfriend and Charles dipping his toe in political matters by privately petitioning various government officials over the years, even as the royals are strictly forbidden from involving themselves in political matters. Can Bartlett's imagined ending, in which a bold woman engineers the solution to all problems, also work on American soil? If so, God save the queens.