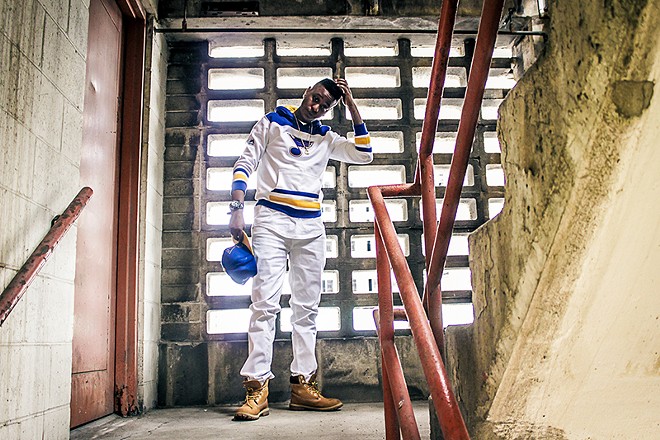 Since when has a black person been able to dictate anything a white person does?" asks rapper/activist Bates, biting back at an all-too common question: "So, can a white person listen to your record?" The question is rhetorical, of course, yet Bates, born Tamara Dodd, knew she would collide with that mindset when she dropped her latest, For Colored Folk, only weeks ago.

"I try to get an emotional reaction from people. If I writesomething, I'm either trying to piss you completely off, make you laugh, make you cry or just make you lose yourself," she says. "What I'm going to say is not gonna be palatable for some, but you can't discredit my actual experience. Some people can't handle other people's experiences like that."

It has been a momentous year for the rapper. In the first half of 2016, Bates scored a hat trick at the S.L.U.M. Fest Hip-Hop Awards, taking home accolades as both Best Hip-Hop Artist (Female) and Hip Hop Artist of the Year while receiving the award for Best Hip-Hop Video for "Tell Jesus," the second cut off her new record. She turned heads online for an entirely different reason when The Guardian shared a video of her tactfully talking to Donald Trump supporters outside Peabody Opera House in March.

For Colored Folk is a navigation through spiritual, social and political minefields — a crossroads of intersectional issues that she attacks head-on while aiming straight for the gut. Throughout its fifteen cuts, Bates never meets the audience halfway. Not a single track comes sugar-coated, and she spits with a brash vibe that respects the time and intelligence of her peers and fans alike.

Once a devout Christian, Bates now identifies as gay while facing a separate challenge altogether: that of being a female rapper within the hip-hop scene.

"I know I fit in a different box, but the reason hip-hop has accepted me the way that it has is because I don't put myself in the box," she says. "I have maybe four out of hundreds of songs where I talk about women, but it's never 'hey, I'm gay.' It's just me talking about my relationship like a regular person would."

Bates spent her early twenties with rap-group Xplicit, cutting her teeth on the street while fighting for every chance to perform. Xplicit ran from 2001 to roughly 2005, but Bates recalls members of the group dropping off and losing heart. She formed a duo with her brother Smurf to produce her first studio album Lethal Legends in 2006.

In the years to follow she focused on her solo career, dropping mixtapes and albums before collaborating with H.A.R.D. Asylum, where she picked up TRUE On Tha TRAC as her main producer. While Bates still works solo, she often performs with Phenom Ionos and Kourtney Nicole, with whom she plans to collaborate on her next project, Black Eve, this coming winter.

In the last three years, Bates has mobilized women in the scene through FEMFEST, a collaborative event with S.L.U.M. Fest that features female artists at the forefront. She even helped launch the Femcee Nation Organization, a group founded in 2013 to, in their own words, "uplift and encourage positive female imagery by advocating female entrepreneurship and bringing about an end to gender bias in the music industry."

"It takes a special type of person to keep at this shit for a long time, and dealing with that type of shit over and over again can be disheartening," she says.

It might be easy to forget that behind her work as an artist and organizer, Bates is an activist who stood on the front lines of the movement in Ferguson following the shooting of Michael Brown. Despite growing up in Tower Grove South, she now operates from her home in the north county suburb of Jennings, in close proximity to what many consider the center of civil unrest.

She feels that her time is now better spent in the studio and onstage, not the streets.

"I do a lot, you know. But I can touch the most amount of people with music," she explains. "Instead of me just trying to draw a picture and be like, 'See, what I meant by this was ...' I can make people feel what I'm saying right then. I don't have time to waste on ears. If I catch your ears I'm gonna make sure I can get my issue off. And then I can go have a beer."

Stream Bates' For Colored Folk in full below: