St. Louis Musicians to Get You Through These COVID Days

CURRY STREET STUDIOS The Show Me Cypher recording a track during simpler times.

What are you most looking forward to doing after this is all over?

It's a loaded question. Many of us are struggling to see the light at the end of the tunnel, as well as coming to terms with the very real fact that a new normal is upon us.

I think about going to my favorite bars and clubs. I want to have small plates and tacos with my friends. I wanna walk with my grandparents through their backyard garden. I'd love to give my parents a hug. My wants and feelings are small in comparison to the sacrifices essential workers are making every day. And for that, I am beyond grateful.

I remember being a super angsty teen. I'm talking completely losing my shit listening to Coldplay songs, and "identifying heavy" with Deathcab For Cutie. Sometimes I look back on my teen years with disbelief of how weird I was. And yet, I remember exactly where I was in my life when those older songs play in bars, the mall and on random shuffle on my phone.

Over the past seven or so weeks, I've relied heavily on music to get me through. Since last November, I've been writing about local music. It's an opportunity that's given me the freedom to write about artists St. Louis might have otherwise never known about. The local hip hop and indie music scene has tremendous talent. It's been a privilege to witness what feels like a sort of renaissance of art happening over the last several years. St. Louis creatives have been living in a bubbling cauldron that is ready to boil over.

When bars and music venues were forced to close their doors, the upcoming local concerts went with them. For so many up and coming artists in this city, the opportunity to perform at many of these venues were guaranteed ways to get audiences interested in their music. When that opportunity was taken away, St. Louis artists continued to rise to the challenge.

And so I continue to be inspired by the sounds coming out of these neighborhoods. Musicians are hosting live streams on social media, they're still putting out the projects they've spent months working on, they're premiering music videos. They are even performing on rooftops for their neighbors. Through it all, my own quarantine playlist has been a lineup of local artists; some I've written about, some I haven't. From the perspective of a local music writer, here's what's on my quarantine playlist.

Ever so creative with her wordplay, "Hot Sauce" is the latest single from rapper pinkcaravan!. It's a catchy and bouncy song that raves about, you guessed it, hot sauce. The rapper has a history of uniquely describing food in her music, laid on top of tick-tocky Candy Land-esque beats that can only be described as quintessentially Namesake, pinkcaravan!'s longtime producer.

Good hook writing is really hard to come by with local rap artists. Oftentimes, artists find themselves just spitting over a beat with really heavy lyrics and no memorable hook. Truly not the case here. MBZ Live on the hook and the first verse is exciting. His cadence and voice control are unique, and "Stop Talkin' to Me" is the type of song one would expect to hear in heavy rotation on the radio. Coupled with J'Demul on the second verse and EJ Carter to round out the song, it's a track everyone should hear.

FAVORITE LINE: "Pockets ain't fat 'cuz I got it on a credit card / And it swipe real well"

The first time I heard "On Baby," I was shook. It's a track by the artist Anwar and has quickly become the first thing I play in my car on the way to buy essential items. If the Grim Reaper was a rapper, his voice would sound like Anwar's in this song. The track has no traditional structure. It just starts, reading like one long breath with repetition at the end. It's the perfect song that illustrates it's not what Anwar's saying, it's how he's saying it. Produced by LoveBaker.

FAVORITE LINE: "I stay in the hood / They'll rob you for your goods / Most houses here are vacant / But they still sell quality drugs / Goddamn oh hell / That shit amazed me / Yeah this gon' slap / I put that on baby" 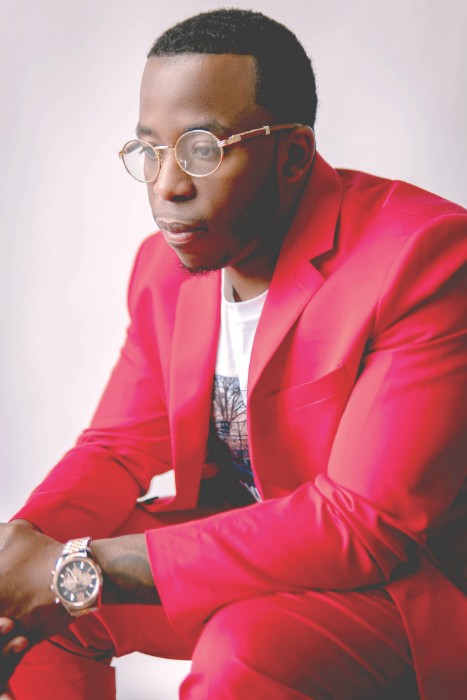 A soulful rapper whose sound is influenced by multiple genres, NandoSTL is an artist whose rise to fame is certain. Off his recent EP Bamboo, which he released the first week into quarantine in March, "What a Day" is nothing short of sonically stunning. It's a song that features Nando rapping over his live band, playing with vocal styles, tempo and cadence. The track is heavily influenced by Nando's struggles in life with lack of trust in family, in past love and in life's ups and downs. Perfect for this time of social distancing and reflection.

FAVORITE LINE: "Trusted in my daddy and he let me down / What a day / That side of my family can't even come around / 'Cuz of things they say / Plus it really hurt me when my baby momma cheated / Guess everything I was wasn't everything you needed / I got scars on my heart from that / What a day"

With a title fitting of the times, musician and producer Orlando Vaughn blesses listeners with his latest EP, No Rush. For five tracks, Vaughn mixes chill, groovy instrumentals with sexy, soothing interludes. It is sonically pleasing, what could be described as the soundtrack to finishing up house chores. With a sampling of vocals, Vaughn does not disappoint. standout track: "My Lighter"

Ever the clever wordsmith, Zado's aptly named EP Stuck in Tha House is an appetizer of a body of work for listeners eager to have fresh content in quarantine. It's got three tracks that showcase the rapper's stylized mumblings he's cultivated as a signature sound. Its explosive beats with matching punchlines makes Zado a rapper that audiences can always expect something unique from.

Nikee Turbo is back with a super creative music video for his latest song, "Slap." It's a fun watch that showcases Turbo in a variety of situations, including clad in a Storm Trooper suit, hand-painted by prolific artist Brock Seals, along with quirky scenes. The track is explosive, executed in a way only Nikee Turbo can.

Once heralded as the premier rap cypher in the city, The Show Me Cypher is back. This time, it features a younger crop of some of the city's most exciting names, including Myrion Twos, KVtheWriter, Big Neph, LouTribe Jigg and J-Hop. It's a stunning ten-minute look, as the rappers showcase their varying styles in a mashup that's equally beautiful to watch as it is to hear. Creator and award-winning filmmaker Jon Alexander enlists the creative prowess of videographers Alex Don and Drew Brown for a project that had all social media awaiting its release.

Singer-songwriter and theatre performer Tre G recently released the visual to his track "Take Off" from his 2019 project As I Am. The song itself is a touching ballad, and the video matches its vibe perfectly. As we're all at home thinking about life and what the future holds, Tre G's somber yet uplifting piece is just what everyone needs. For this, the artist tapped fellow singer-songwriter Drea Vocalz for her directing skills, while LouTribe Jigg shot and edited with a touch only someone invested in the piece could wield.