But they weren't when they began working together on comics, at which point they were simply a writer and illustrator looking to collaborate on some cool projects. Over time, they've achieved that — and then some. This month, the pair will offer up a four-issue run of a series called Butcher Queen through Red 5 Comics. A "one-shot" version of the title already landed them a coveted spot selling their wares at the most recent San Diego Comic Con, allowing Ousley a unique chance to experience fandom's biggest event on his very first visit.

"Ben and I met when working with Ink & Drink Comics, our hometown publisher here [in St. Louis]," Ousley says. "They publish anthologies about twice a year, and each has a different theme. My friend Oscar Madrid and I got interested in comics around the same time, and we automatically gravitated to Ben."

This draws a response of, "I don't remember our first encounter at all" from Sawyer, which meets with laughter. And from Ousley: "Ben, I'll never forget it."

The joshing about that moment aside, Ousley says that he was coming into his own stories at the time.

"I just went to Ben with these ideas," he says. "And a few years ago we decided to do our own anthology, a horror one called Dead Palace. And there was a character in it named Syd Kiowa."

As Ousley explains it, the character of Syd Kiowa wound up being the key to landing a deal with Red 5, as they'd initially contacted the publisher about a horror series. Instead, they successfully pitched Red 5 on a story centered on Kiowa, set in a world that will please fans of '80s sci-fi, in the spirit of classics like Mad Max or Blade Runner. 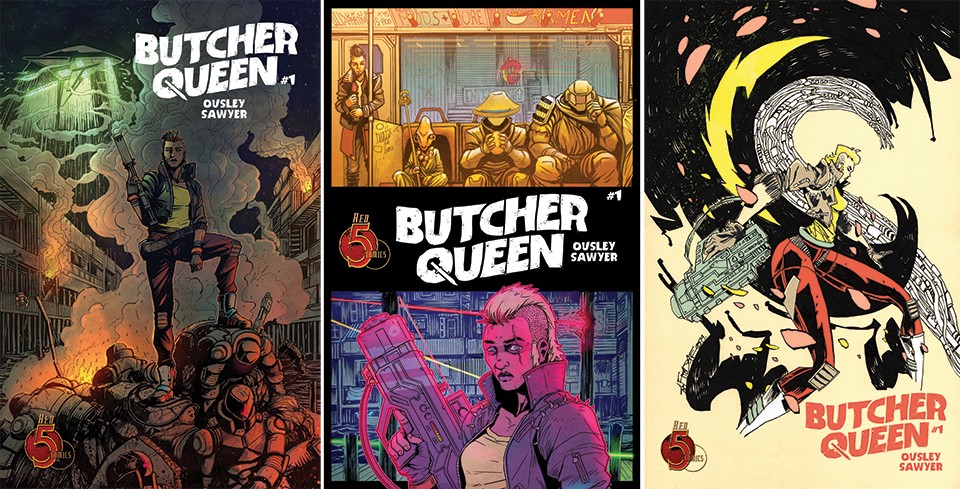 In the "ashcan" edition of their first issue, also sold at Comic Con, the series is set up like so: "In Black Star City, alien off-worlders are being systematically attacked and removed from society by a clandestine paramilitary group called the Overseers. When fugitive cop-turned-mercenary Syd Kiowa is contacted by a victim who escaped their grip, she is thrust into a horrifying war of secrets that will determine the future of human and alien relations on Earth forever."

Ousley says that Syd Kiowa was not based on an actual ex-cop, or any other character that he'd seen.

"The original idea for Butcher Queen happened as I was going through a really, really terrible personal thing and there was some real regret involved," he explains. "No matter how much of a good person you are, you sometimes have to fight to get the feeling back that you are a good person. So it didn't even come from sci-fi, but just that feeling. I thought of the title 'Butcher Queen' and put these things together, then talked to Ben and developed that."

Sawyer suggests that their creation, to date, has tried to go beyond the usual tropes and, rather, "be a character piece in a sci-fi setting."

"Like Star Wars, which isn't about X-Wings, but is about a boy who doesn't know his father and inadvertently kills a lot of people," he says. "We wanted our lead character to be of mixed-ethnicity and took her as sort of a Michelle Rodriguez type, based on the ass-kickers of Hollywood, like a Sigourney Weaver. She's a tank. I knew if I ever had the opportunity to feature a woman on a cover, I was going to make her strong."

Having knocked at the door for a good while, Sawyer says that he'd almost given up the ghost on comics, working in other creative forms combining art and tech. The arrival of the Red 5 contract came at a fortuitous time.

"Last year, I'd almost given up completely. Comics aren't a lucrative game, unless you've already made your name or Netflix finds you," Sawyer says. "I was ten years into not filling the coffers and then Red 5 hit us up, so it was, 'Let's give it another year.' It was a trajectory, and I was almost done."

Instead, Sawyer's now spending time catching up to Ousley's vision of the Butcher Queen universe. Ousley is working on the fourth (and presumably final) edition, while Sawyer's deep into the second.

Trading ideas via a Dropbox account and occasional real-life conversations, the pair have found a comfortable groove in the creation of the turbulent fiction of Black Star City.

"In how we collaborate, there's a trust that has to be established," Ousley says. "If he has a criticism, I won't take it personally. If we have something we disagree on, which is rare, then it becomes a negotiation. In the context of things, that's not a bad feeling."

The release party for Butcher Queen will be held on Friday, September 20, from 6 to 8 p.m. at the Wizard's Wagon, 6388 Delmar Boulevard.