DOYLE MURPHY Inmates at the St. Louis City Justice Center took over two units in the jail on February 6.
Editor's note: After our original story published on February 6, we continued to report as we prepared for the Riverfront Times print issue. We updated this post on February 10 with that greatly expanded version of the story.

More than 100 inmates at the St. Louis City Justice Center took over two units of the jail early Saturday morning, shattering fourth-floor windows and setting small fires as they called out jubilantly to a crowd of supporters who gathered on the street below.

The uprising began about 2:30 a.m., and detainees held control of the units for more than six hours before jail staff, bolstered by city sheriff's deputies and police, regained custody.

For weeks, tensions have been high at the downtown jail. Inmates staged two protests in late December and early January to complain about COVID-19 protocols and other conditions in the facility, where the majority of the city's detainees are now housed.

Saturday morning's uprising was the biggest and most public of the three. St. Louis Public Safety Director Jimmie Edwards said at a 10:15 a.m. news conference that it began with a clash between an officer and one inmate. Other detainees jumped in and soon overran the unit as the injured officer escaped with bumps and bruises. Multiple inmates were able to jimmy the locks on their cells — an ongoing problem in the jail, Edwards said — to join the group.

Men in a second unit also let themselves out of their cells at about the same time. Both units are on the fourth floor but separate. The men then forced their way into adjoining hallways but never took control of the floor itself, remaining separated on the west and east sides of the building. In all, the two groups included 117 inmates, according to Edwards.

On both sides of the building, the men smashed windows and launched whatever they could through the openings. On the west side, which faces Tucker Boulevard, everything from plastic stools and digital monitors to packets of ramen noodles hit the pavement. On the back side of the jail, facing 11th Street, an entire elliptical machine landed next to a file cabinet, chairs and other debris. Rolls of toilet paper extended like streamers across the pavement. City workers later found the electronic controls for the cell door locks ripped from their moorings and flung out the windows like trash.

"We're going to do that shit all day," one man yelled after inmates threw a panel out of the west windows. "It ain't going to stop."

Inmates lit pieces of cloth on fire at the window ledge. One man set the bristles of a straw broom alight and held it over his head like a torch.

The men mostly wore masks or otherwise wrapped their faces in cloth. At times, there were at least eighteen crowded behind the jagged window edges. That continued until well after sunrise when the windows suddenly began to empty. A lone inmate remained at the far edge, narrating the arrival of officers.

"They macing us," he shouted to the crowd below, pausing to look over his left shoulder. "They throwing tear gas."

And then, "They arresting everybody." Soon, he too was gone.

Shortly before 9 a.m., officers and deputies wearing gas masks and helmets appeared in the newly deserted windows, leaning out of the openings with fire extinguishers to blitz embers still smoldering on a concrete ledge.

The mood during the uprising, both on the fourth floor and in the crowd of supporters cheering from the street, had been celebratory. But the incident followed weeks of unanswered complaints from inmates and crackdowns by jailers, advocates say. In the hours and days after the jailhouse revolt, advocates and city officials clashed over why it happened and what it meant. Attorneys and activists who have been working against the cash bail system that leaves people who are too poor to pay stuck behind bars for months, even years, described it as a predictable response to what they say has been weeks of legitimate but unanswered concerns from detainees.

"Since the middle of December, we've been receiving emails and reports from families and people who are incarcerated about the constant mistreatment of inmates inside of the jail," said Michael Milton, advocacy and policy manager for the Bail Project in Missouri. "From how they've handled COVID, from how they've handled even food and nutrition, [inmates] have had several different demands about the treatment inside of CJC."

Inmates and their families have told the Bail Project that officers have retaliated against detainees who raised concerns about other "visibly sick" inmates, even changing housing assignments to force them to share cells with the ill inmates in question, Milton said.

At a recent public safety hearing, city officials revealed there had been a December surge of COVID-19 cases among inmates and more than 80 people housed in St. Louis' two facilities had tested positive since the beginning of the pandemic.

Speaking on Saturday to reporters gathered in City Hall, Edwards dismissed any COVID-19 concerns as a motive for Saturday's uprising, saying there were currently no cases of COVID in the jail. He described the breach as a one-on-one scuffle between a guard and an upset inmate that ballooned into a larger problem. In his telling, it was not a long-approaching conflict, but an unpredictable eruption that was exploited by violent men. He described it as different from the previous protests in December and January. 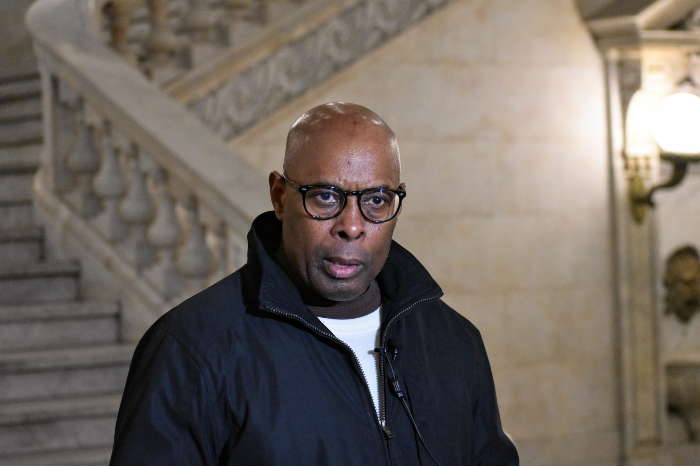 Edwards emphasized that no hostages were taken or demands made on Saturday.