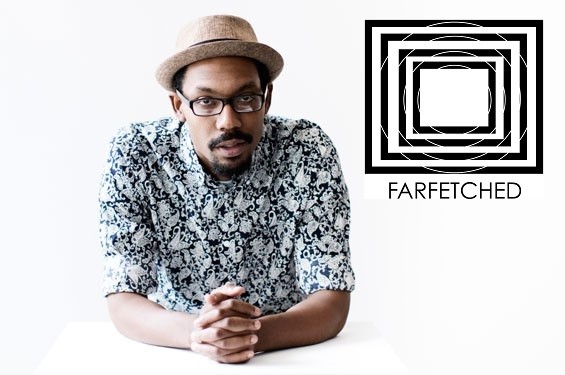 Five years ago this month, the FarFetched collective introduced itself to St. Louis with a bold compilation called Prologue. The tracks read as hip-hop on their surface, but an experimental, often spacey edge suggested something else. The comp introduced FarFetched as a type of record label that didn't produce physical media; more than anything, it provided a big enough tent for local (and some national and international) artists to huddle under without having to adhere to any one style. The album's logo — concentric circles radiating in and around stacked squares — became the collective's calling card and a kind of Bat-signal across town. Purposefully or not, the image offers a visual analog to the group's aesthetic: radiant layers of art and music that don't fit into genre-specific boxes.

Damon Davis and Darian Wigfall are the main heads in the hydra-like brain trust that is FarFetched, an enterprise that defies easy summation while promoting and producing music not cleanly categorized. Wigfall notes that most of the groups "are pretty disparate, but we all have a foundation in experimentation. We hear something and want to recreate it and then recreate our own version of that thing, or some completely different music inspired by the original stimulus."

Since that initial 2012 release, the imprint has dutifully released a new Prologue each January, and the albums have served as a relatively up-to-date label roster and tip sheet for local talent. This year's iteration of Prologue is missing some of the bigger names that have contributed in years past; Ou Où has since disbanded, and the still-active CaveofswordS and Black James (who currently performs as ICE) are absent. But mainstays such as Ryan McNeely's Adult Fur, Mathias & the Pirates and Scripts n Screwz turn in solid performances, and relatively recent additions — beat-heavy synth wrangler Ewokie Talkie, Sarah Downen's dark-and-dreamy Golden Curls — fill in the blanks with assuredness.

"New members come in differently," says Davis. "Sometimes they find us or we find them, but it is usually on the basis of like-mindedness in respect to music, message and attention to originality."

Davis himself appears a few times on the program; as Loosescrewz, his sound collage "City of God (Saturn Theme)" percolates with looped, ethereal vocals but is undercut by samples of the cries of a restless crowd. Blank Generation, the live hip-hop group anchored by Davis and Hearskra-z, submits a ruminative and soulful "Borrowed Time."

The other hallmark of the Prologue series has been the oft-fruitful collaborations among artists in the collective; it's not unusual for hip-hop lyricists to throw down with reverb peddlers, or for avant-pop weirdos to join up with bedroom beatsmiths. Prologue V feels lighter than years past in that regard, and most acts have turned in solo efforts. The few partnerships here reveal workable juxtapositions: Stephen Favazza normally records Hands & Feet's dubby, shoegaze-indebted tracks alone, but Ben Bishop's verses emphasize the rhythm of "Hello Darling" after an intro of pinging synth and far-away melodica.

Mathias & the Pirates borrow snippets of a street band's horn section for "Brettanomyces," but 18andCounting's Stan Chisholm is a welcome addition to the crew. Mathias uses the track to harp on his favorite subject — the sorry state of modern hip-hop — but the group gets credit for dropping knowledge with the song's title, a strand of yeast used in lambic and saison beers. Craft brewing meets small-batch hip-hop.

Davis speaks to the primacy of these collaborations, both on the Prologue series and in the collective's overarching vision. "It is important because one of our staples is innovation and experimental musically, and so we all get a chance to learn and teach each other in the studio," he says. "The result is always something interesting and I think the testament of a great label or collective is how its artists work together."

Wigfall continues the thought. "Collaboration is an important part of this project and FarFetched in general because, in order to move forward as musicians and people, we have to learn from each other," he says. "Collaboration forces that, but the character of the people in our collective family make it stick."

So if collaboration has taken a back seat this time around, Prologue V still provides a platform for artists to say their piece. That the comp is bookended by relatively young acts — the video-game ambiance of Abnormal's lead-off track "Select Screen" and Subtle Aggression Monopoly's bellicose, AutoTuned closer "Steady Shooter" — suggests that the label's aesthetic has already influenced a younger generation.

Davis, FarFetched's founder, believes in the musicians' individual strengths, as well as their capacity to share and grow with one another, for the imprint's relative longevity. "Character is a very big thing to me, and the people that are with us have tons of it. That makes everything go smoother," he says. "That is why we are still a 'thing' after five years and haven't fallen apart, especially in crucial times."

Listen to Prologue V below: